Jane prayed that the tranquility and sweetness of her life would not be permanently disrupted. She meant to do so much more for her people than she had done. She wanted the sleepy quiet pastoral days to last always. Trouble between the Mormons and the Gentiles of the community would make her unhappy. She was Mormon-born, and she was a friend to poor and unfortunate Gentiles. She wished only to go on doing good and being happy. And she thought of what that great ranch meant to her. She loved it all--the grove of cottonwoods, the old stone house, the amber-tinted water, and the droves of shaggy, dusty horses and mustangs, the sleek, clean-limbed, blooded racers, and the browsing herds of cattle and the lean, sun-browned riders of the sage.--Ch. 1

Heroine Jane Withersteen is the owner of a successful ranch and a member of the Mormon church. When she refuses her father's wish that she marry into the polygamist family of a church elder, her struggles are reflected in Grey's epic descriptions of the American West. Grey tackles complex religious, social, and cultural issues in his best-selling novel that epitomises the life and times of pioneering men and women and the Code of the West. Grey was a best-selling author of pulp fiction, essays, short stories, and western-themed novels which have gone on to inspire scores of other authors' works and adaptations to the stage and film, of which he played an active role when he moved to California.

Pearl Zane Gray (who would later drop his first name and change the spelling of his last name) was born on 31 January 1872 in Zanesville, a town founded by his maternal ancestor Ebenezer Zane (1747-1811). It is located in Muskingum County where the rivers Licking and Muskingum meet in the Ohio Valley. In the early 1800's the frontier road named Zane's Trace and the river ferry service brought many travellers and settlers to the area which quickly grew as a thriving community of craftsmen; mills and potteries among its businesses. River life would have a profound affect on Zane's future. He was the third child born to Alice Josephine (1839-1917) and Lewis M. Gray, M.D. (1831-1905), dentist. He had two sisters, Ida and Ella; and two brothers, Romer Carl and Lewis. Grey developed a love of physical pursuits as a young man and during his lifetime he was an avid horseback rider, hunter, fisherman, and baseball player which earned him a scholarship to the University of Pennsylvania.

Graduating with a degree in dentistry in 1898, Grey established a dental clinic in New York City. He also played minor league baseball for a time which inspired a number of stories and novels including The Young Pitcher (1911) and The Redheaded Outfield and Other Baseball Stories (1920). With a love of the great outdoors entrenched in his character from childhood, Grey often ventured out of the city with his brothers. Lackawaxen Township in the neighboring state of Pennsylvania was a frequent canoeing and fishing destination--it was there at a boarding house that Grey met his future wife. On 21 November 1905, Grey married Lina Elise 'Dolly' Roth (1883-1957), with whom he would have three children: Romer (1909-1976), Elizabeth (b.1912), and Loren (b.1915). Grey would pass on his love of the great outdoors to his children. He and Lina honeymooned in California, then settled in a farmhouse in Lackawaxen. Around this time Grey started to write about his hobbies; his first of many published stories and articles about fishing titled "A Day On The Delaware" appeared in 1902 in Recreation magazine. During his lifetime Grey wandered far and wide; his first big adventure was to the Grand Canyon with Colonel Charles Jesse "Buffalo" Jones (1844-1919). He often travelled west to his hunting lodge in Arizona, and stayed at the Long Key Fishing Camp in Florida in the winter to immerse himself in the world of big-game fishing of which he achieved many records.

After closing his dental practice Grey was able to devote much time to writing novels, articles, and short stories based on his adventures. Lina tolerated his long absences--she was a hearty supporter of his writing career, assisted in business matters, and helped edit his manuscripts. Although Grey initially met much rejection from publishers, he self-published his first novel Betty Zane (1903), which is based on the lives of his illustrious ancestors;

My grandmother loved to cluster the children round her and tell them that when she was a little girl she had knelt at the feet of Betty Zane, and listened to the old lady as she told of her brother's capture by the Indian Princess, of the burning of the Fort, and of her own race for life. I knew these stories by heart when a child.--from the Note

Its sequel, Spirit of the Border (1906) was followed by his Grand Canyon inspired novel The Last of the Plainsmen (1908). The Last Trail (1909) and his best-seller The Heritage of the Desert (1910) were titles to follow. However, it was Riders of the Purple Sage (1912) that won Grey wide acclaim and became his best-known novel. The sequel to it, The Rainbow Trail appeared in 1915. Three years later the Greys moved to California where Zane established the Zane Grey Productions film company. Although it was soon bought by a company that would become Paramount Pictures, dozens of Grey's novels and stories were filmed for television and the big screen.

After buying the sailboat Fisherman in 1924, Grey set off on many high seas fishing adventures in the waters surrounding Fiji, the Galapagos Islands, the Florida Keys, Catalina Island (where he also maintained a residence), Tahiti, Nova Scotia, Australia, and New Zealand. The Great Depression had little effect on Grey's career; he wrote prolifically up to the year of his death and has had many posthumous works published. Zane Grey died on 23 October 1939 at home in Altadena, California, and now rests in the Union Cemetery of Lackawaxen, Pike County, Pennsylvania, Dolly beside him.

Other titles by Zane Grey include;

He is now considered a legend and has books dating back to the early 1900's, i.e. Riders of the Purple Sage. These should be included in any classic library. ... 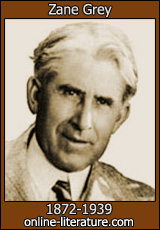 Here is where you find links to related content on this site or other sites, possibly including full books or essays about Zane Grey written by other authors featured on this site.