William Wymark Jacobs was born 8 September 1863 in Wapping, London, England. The eldest son of William Gage Jacobs, and his first wife, Sophia Wymark, who would die when Jacob was very young. Jacob's father was the manager of a South Devon wharf, and young Jacobs spent much time with his brothers and sisters among the wharves observing the comings and goings of the tramp steamers and their crews.

The Jacobs were a large family and poor; young W.W. as he came to be called by his friends, was shy and quiet with a fair complexion. A respite now and then from the dreary dockside life were holidays at a cottage near Sevenoaks, and visiting relatives in the countryside of rural East Anglia, reflected in his Claybury stories published in Light Freights. (1901)

Jacobs attended a private school in London then went on to Birkbeck College. In 1879 he became a clerk in the civil service, then the savings bank department from 1883 until 1899. A regular income was a welcomed change from his childhood of financial hardship, but around 1885 he also started submitting anonymous sketches to be published in Blackfriars. In the early nineties Jacobs had some of his stories published in Jerome K. Jerome and Robert Barr's illustrated satirical magazines The Idler and Today. The Strand magazine also accepted some of his works. His early stories were tentative and naïve but they were enough to show he had promise upon further development in a career as a writer. Henry James, G. K. Chesterton, and Christopher Morley commented favourably on his work.

In 1896 Jacobs' first collection of short stories was titled Many Cargoes of which Punch magazine said his favourite subjects were "men who go down to the sea in ships of moderate tonnage." It was followed in 1897 by a novelette titled The Skipper's Wooing and in 1898 by another collection of short stories Sea Urchins. By 1899 Jacobs was confident enough to resign from the civil service to devote his full time to writing. In 1900 he married suffragette Agnes Eleanor with whom he would have two sons and three daughters.

Jacobs's 1902 novelette At Sunwich Port and Dialstone Lane (1904) are said to be among his best, displaying his exceptional talent to ingeniously devise characters and satirical situations. Often his stories are about the British underclass, sometimes with surprise endings. The Lady of the Barge (1902) contained among other horror stories The Monkey's Paw. His last collection of short stories is titled Night Watches. (1914) Though Jacobs had a long and successful career, prolifically producing satirical and macabre short stories, he is mostly known for The Monkey's Paw which has been filmed and adapted for the stage numerous times. 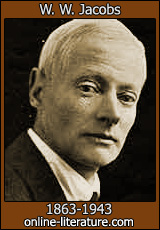 Here is where you find links to related content on this site or other sites, possibly including full books or essays about W. W. Jacobs written by other authors featured on this site.