Willa Cather (1873-1947), American author and teacher, considered to be one of the best chroniclers of pioneering life in the 20th century wrote My Ántonia (1918).

"When I strike the open plains, something happens. I'm home. I breathe differently. That love of great spaces, of rolling open country like the sea--it's the great passion of my life."

Willa Sibert Cather was born on 7 December, 1873 in Back Creek Valley, Virginia. Her father was Charles Fectigue Cather (d.1928), a farmer, and her mother Mary Virginia (Jennie) Boak (d.1931). The early years of young Willa's life left a memorable impression on her and formed the basis for many of her stories and characters. The Cathers travelled west across six states landing in Nebraska, Webster county, in 1883 to live at her paternal grandfather's farm at a time when many Swedish, French and Bohemian immigrant pioneers had moved to the area with dreams of homesteading. Willa became acquaintance and friend to many of the new Americans. There was stark contrast between the lush wooded hills of Virginia and the wide open prairies and tableland of Nebraska to the ten year old tomboy. After a few years the family moved to the village of Red Cloud where Charles opened an insurance and real estate office.

Cather entered the University of Nebraska at Lincoln in 1891 with her sights set on studying science, though a professor's submitting one of her papers, an essay on Carlyle, to the school newspaper the Nebraska State Journal, caused her to rethink her career plans. She began to write a column for it in dramatic criticism, and also acted in a number of school plays. A year after her graduation in 1895, her love of music and concerts led her to Pittsburgh, Pennsylvania, "the city of steel" and an offer to become editor of a Pittsburgh paper. She was telegraph editor of the Daily Leader, drama critic, and also submitted book reviews. Her journalistic career was now in full swing.

In 1900 Cather became an English high school teacher in Allegheny, Pittsburgh. The months off in the summer allowed her to travel to France in 1902 with Isabelle McClung, the daughter of a prominent local judge who had become her best supporter and lifelong friend. It was the first of a number of trips that fostered the great love Cather had for France's culture and literature. April Twilights (1903) was her first publication, a collection of verse. The Troll Garden (1905), a collection of short stories followed.

Having moved to New York, Cather became McClure's magazine managing editor between 1906 and 1912. Alexander's Bridge (1912), Cather's first novel, shows the influence of the stage as Bartley Alexander is torn between his love for an actress and his life's work and responsibilities, bridge building representative of the powerful turn-of-the-century Industrial America. Cather earned a doctorate of letters from the University of Nebraska in 1917. During her lifetime she also earned honorary degrees from the University of Michigan, the University of California, and from Columbia, Yale, and Princeton.

In O Pioneers! (1913) Alexandra Bergsen portrays the indomitable woman of pioneering spirit that Cather would soon so effortlessly portray. The Song of the Lark (1915) is perhaps her most autobiographical work, again highlighting the richness of her characters' inner landscape against the potential wealth of their surroundings. My Ántonia (1918) Jim Burdon as narrator follows the life and struggle of immigrant settlers, Ántonia in particular. Her heartbreaks, loves and pure determination are described straightforwardly yet empathetically in all their gritty detail. Youth and the Bright Medusa was published in 1920.

Claude Wheeler, a Nebraska youth, goes off to serve in World War I in Cather's One of Ours (1922), which she won the Pulitzer Prize for. Yet another authentic portrayal of life on the Great Plains, A Lost Lady (1923), Marian Forrester, was inspiration for a film in 1934. The Professor's House followed in 1925, and My Mortal Enemy (1926) is an examination of marriage and the definition of happiness. Soon after finishing Death Comes for the Archbishop (1927), Cather's father died and her mother had a stroke. Archbishop is the poignant story of Father Jean Marie Latour and his dutiful service in the unforgiving desert of New Mexico. When her mother died in 1931, Cather started to spend her summers on Grand Manan Island in the Bay of Fundy in the province of New Brunswick, Canada, in the cottage she had built. Set in the Canadian province of Québec, which at the time was a French colony, Shadows on the Rock (1931) follows the life of Cécile Auclair, another immigrant to a new world that Cather masterfully detailed.

In 1932, Cather was now living in New York in an apartment on Park Avenue with her friend and companion Edith Lewis. In 1933 she was awarded the Prix Femina Americaine "for distinguished literary accomplishments." Lucy Gayheart (1935) is a haunting mix of contrasts between city and country, small town America and world culture, and follows the dreams and aspirations of a talented young musician. Sapphira and the Slave Girl (1940), "a novel of jealousy set in pre-Civil war Virginia" is said to be one of Cather's more remarkable works where she returns to the state of her birth in the story of Sapphira Dodderidge.

Willa Cather died on 24 April 1947 of cerebral haemorrhage at her Madison Avenue apartment in New York city and was buried in the Old Burying Ground of Jaffrey Centre, Cheshire County, New Hampshire, on a special hillside spot she had selected. Her tombstone reads:

THE TRUTH AND CHARITY OF HER GREAT
SPIRIT WILL LIVE ON IN THE WORK
WHICH IS HER ENDURING GIFT TO HER
COUNTRY AND ALL ITS PEOPLE.

"...that is happiness; to be dissolved
into something complete and great."
- From My Ántonia

Willa Cather had a long illustrious career writing essays, poems, short stories and novels, touring the Nation to lecture, and contributing to many newspapers and journals as writer and editor. She travelled extensively to gather material for her stories and characters, and was acquainted with and respected by many other popular writers of her time. She was first woman to be inducted into the Nebraska Hall of Fame. The Willa Cather Pioneer Memorial and Educational Foundation was established at Red Cloud, Nebraska. The Willa Cather Historical Center by the Nebraska State Historical Society works in honour of her memory and there is also a tribute to her in the naming of the Willa Cather Memorial Prairie.

I just finished Willa Cather's "Coming, Aphrodite!" This is the first time I've read any of Willa Cather's work, though I plan to read "My Mortal Enemy" next. Is anyone familiar with her work?...

Has anyone here read that story? Anyway, it's about a bourgeois Pittsburgh teenager who escapes reality by going to Carnegie Hall and later fleeing to New York. My English teacher pointed out that Cather was probably a lesbian and demonstrated how Paul, the character, was homosexual. She's extremely politically correct, and she made it out like the source of Paul's misery is his homosexuality. That's a bunch of bullcrap, in my book. Paul's problem is the banality of his bourgeois life, not his homosexuality. While Cather does hint that the character is a homosexual, it it not the point. Any thoughts?... 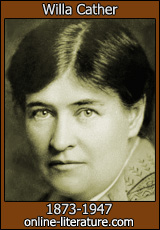 Here is where you find links to related content on this site or other sites, possibly including full books or essays about Willa Cather written by other authors featured on this site.