Wilkie Collins (1824–1889), English author and master of the detective novel wrote numerous essays, short stories, more than a dozen plays, and published twenty-three novels including The Woman in White (1860).

Collins' father William John Thomas Collins (1788–1847) was a well-known landscape artist, producing over 200 major works and whose patrons included King George IV, aristocrats and members of the clergy. William became a full member of the Royal Academy in 1820. [William] Wilkie Collins was born on 8 January 1824 at 11 New Cavendish Street, St Marylebone, England, and was baptised on 10 February at the parish church of St Mary-Le-Bone, an area of London where he would live for most of his life. His mother Harriet (1790–1868) was a daughter of Captain Alexander Geddes of Alderbury.

At the age of twenty-nine Collins had a bout of rheumatic inflammation in his eyes that, along with gout, would afflict him off and on for the rest of his life. Among his future reading audience there developed a fascination with the parallels between his private life and his stories. Collins and his brother Charles led a relatively happy childhood being home schooled, though under the heavy hand of their mother and father's evangelical Christianity. Including his distaste for formalities, Collins would soon adopt unconventional attitudes and dress; he sported a long beard and spurned bourgeois society.

He looked forward to summer jaunts in the countryside with his father who's artistic eye for painting landscapes lead his son to garner a fine appreciation for nature. Starting in 1826 the Collins family left London and lived for a time in a house on Pond Street, Hampstead Green. In January 1828 Collins' brother Charles was born. The family travelled to Boulogne, then settled near Hyde Park at 30 Porchester Terrace, Bayswater. During the Reform Bill controversy Collins amazedly witnessed rioters breaking the windows of houses not showing their support with a candle in the window. After a tour of Wales with his father, Collins entered the Maida Hill Academy where he earned the prize of two volumes of Essays Moral and Political by Robert Southey.

The Collins left Porchester Terrace in September of 1836 for Italy. It was there that Collins developed his own sense of aesthetics, learned Italian, and probably found inspiration for his well-received novel Antonina (1850). He also started to write his travel book Rambles beyond Railways (1851).

Back in London in 1838, Collins attended Mr. Cole's boarding-school but found it tedious and fraught with humiliating corporal scenes of chastisement from the headmasters in front of the other students. His knowledge of Italian and French probably brought unwanted attention from the less educated students--one bittersweet result being that he developed the art of story-telling after being bullied at bedtime, under threat of a whipping, to amuse the other boys with his tales. He had no interest in enrolling at Oxford to enter the Church as his father suggested, so he obtained a position with tea merchant Edward Antrobus, until 1846, though he would turn to writing to ease his ennui. After the death of an uncle, Collins painted "Seaford - Sussex" which was exhibited at the Royal Academy in 1844. It was bought by a Mr. John Sheepshanks for 170 guineas. It is now hung in the Victoria and Albert Museum in London.

Collins' first published short story was The Last Stage Coachman (1843) in Illuminated Magazine. His father died a year later when he was twenty-three. Collins' first published book was Memoirs of the Life of William Collins, Esq., RA (2 vols., 1848). Collins entered Lincoln's Inn to study law and was called to the bar in 1852; though he never practiced, his legal knowledge would play heavily in his future stories.

On 12 March 1851 Collins embarked on his lifelong love of the theatre when he was recruited to act in one of Charles Dickens's amateur theatre productions. He and Dickens, twelve years his senior, became great friends and would collaborate on articles for Dicken's periodical Household Words and other journals. It is said that the popular Victorian writer Dickens appreciated Collin's upbeat and slightly rebellious attitude towards Victorian life's conventions. He was a great supporter of his writing and became somewhat of a mentor to Collins. Mr. Wray's Cash Box was published in 1852. Collins drew heavily on his legal background for the mystery Basil (1852) which opens with the lines;

"What am I now about to write? The history of little more than the events of one year, out of the twenty-four years of my life. Why do I undertake such an employment as this? Perhaps, because I think that my narrative may do good; because I hope that, one day, it may be put to some warning use."

Hide and Seek (1854) was not surprisingly dedicated to Dickens;—"To Charles Dickens this story is inscribed as a token of admiration and affection, by his friend, the author."

George Eliot, Ford Maddox Brown, Charles Reade, William Holman Hunt, and Anthony Trollope were also among Collins' friends, as well as the artist Augustus Egg with whom he and Dickens travelled to Switzerland in 1853. Collins' first play was The Lighthouse (1855) which was initially performed in Dicken's children's schoolroom at his home, Tavistock House. In 1857 Collins wrote his best-known play The Frozen Deep of which Dickens would later play the lead role. Writing A Rogue's Life (1856) during a stay in one of his favourite cities, Paris, Collins suffered an attack of rheumatism. He turned to the opiate laudanum for relief which would slowly become an addiction.

Having previously lived with his mother, in 1856 Collins started living together with the widow Caroline Elizabeth Graves, née Compton, and her daughter Harriet. They would never marry. The Queen of Hearts was published the following year but it was The Woman in White (first serialised in Dickens' journal All the Year Round) which caused a sensation and brought fame and fortune to Collins. There was some speculation as to whether Graves played a role in its writing. In 1860 Collins' brother Charles (who died of cancer in 1873) married Dickens' daughter Kate, which was a likely cause of strain on the two author's friendship.

Dickens, who wrote in the profoundly emotive language of his characters and Collins, who excelled in spare and lean psychological analysis, continued to collaborate for All the Year Round until 1862. Armadale was published in 1866. No Thoroughfare (1867) was his first commercial success in the theatre. Much of No Name (1862) is based on a trip of Collins' to the sea coast village of Aldeburgh [Aldborough]. Collins' detective novel featuring the negative effects of opium addiction The Moonstone (1868) was second only to the Sensational Novel The Woman in White which was adapted to the stage in the 1870s. Sergeant Cuff was to become a prototype of future detective heroes. The term 'sensation novel' was coined by reviewers to describe Moonstone, The Woman in White, and others.

It is said that during a holiday of sailing in Norfolk in August 1864, Collins first met Martha Rudd (1845–1919) of whom he'd never marry but had three children with: Marian who was born on 4 July 1869, Constance Harriet on 14 May 1871, and their son William Charles Collins Dawson, born Christmas day in 1874. Too ill to attend his mother's funeral in 1868 Collins said of her death that it was the bitterest of all afflictions he dealt with in his life.

During the 1870s Collins continued to maintain separate households with Caroline and Martha while continuing his writing to support them financially with such titles as Man and Wife (1870), Poor Miss Finch (1872), and The New Magdalen (1873). The same year he would tour the United States and Canada where he read from his works and met Mark Twain. Titles to follow were The Law and the Lady (1875), The Two Destinies (1876), The Haunted Hotel (1879), The Fallen Leaves (1879), A Rogue's Life (1879), and Jezebel's Daughter (1880). While trying to alleviate the pains of his worsening gout by visiting spas like Aix-la-Chapelle and Wildbad, his addiction to laudanum was taking its toll on his health.

Collins was becoming a recluse and starting to suffer from heart and chest pain though he still entertained his friends in his customary lavish yet informal ways. He suffered a stroke and a few months later contracted bronchitis which would lead to his death. On 23 September 1889, Wilkie Collins died at his home on Wimpole Street. Caroline Graves attended his funeral and is buried beside him in Kensal Green cemetery, London, England.

Collins was the first author to use a literary agent, Alexander Pollock Watt, and was involved in the initial formation of the concept of intellectual rights for authors, a cause he championed during his lifetime. In 1884 Collins helped found the Society of Authors.

I have read: Moonstone Woman in White Black Robe Queen of Hearts What should be next three to five reads?...

Hi, I have to do a paper about Wilkie Collins comparing some of his works with the same subject. What can I do??? I have absolutely no idea of where to begin or what to compare, any help will be really useful, thanks!!...

This is not only my first post in this forum, but it is also about the first Wilkie Collins novel I read, namely, The Moonstone. What a nice, heavy, thin-paged, cool book I had on my shelf for years before I was driven by curiosity -- and a personal pact to read everything I own before purchasing any more books-- to open and ingest. I love the complex scheme of details of this plot, and I am fascinated by his use of "journal narrative" by all the characters. It seems like such a round story. I had a tiny feeling of hanging on a cliff when it ended, though. I would be very interested in others' opinions about The Moonstone, and any other novels like this that I can buy when I am finishe... 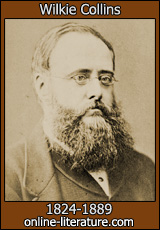 Here is where you find links to related content on this site or other sites, possibly including full books or essays about Wilkie Collins written by other authors featured on this site.