As a trained historian, Weyman was compared with Sir Walter Scott, Anthony Trollope, Robert Louis Stevenson and Alexandre Dumas, but his authenticity and attention to contextual detail caused his works, including A Gentleman of France (1893), From the Memoirs of a Minister of France (1893), and Under the Red Robe (1894) to be widely acclaimed for their romantic content and faithful historical accuracy.

Stanley John Weyman was born on 7 August 1855 at 54 Broad Street, Ludlow, in county Shropshire, England. His father was Thomas Weyman, a solicitor and Coroner for the County of Shropshire, and his mother, Mary Maria née Black. He had two brothers.

Weyman attended the Ludlow grammar school where he first grasped his keen interest in history. The Shrewsbury School is where he read voraciously, including Sir Walter Scott's Ivanhoe and Jane Eyre:- "One of the governesses lent it to me, and I was so enthralled that I read and re-read it, taking it up to bed with me."--"Stanley J. Weyman", by Robert Harborough Sherard, The Idler (1895). Though he loved to read, his father instigated his thorough reading of Macaulay's History by paying him six pence a volume. Weyman spent a lot of time alone reading in the library as he was small in stature and often suffered bullying by his counterparts at school.

Christ Church, Oxford, was next for Weyman where he graduated in Modern History in 1877. A few of his sketches were published in the Chamber’s Journal. At Chester he attended King's School and studied history, enjoying immensely the atmosphere and becoming good friends with the head master. As per his father's wishes he entered Law school, read with a man by the name of Bosanquet, and was called to the bar at Inner Temple in 1881. He practiced for a number of years in the family's firm, travelling throughout England, but his income was minimal and he admitted he was most likely too nervous and sensitive for the courtroom atmosphere. During his years of practice he took up his pen in earnest to try journalism, and unsuccessfully wrote for the St. James's Gazette. Weyman was becoming disheartened by consecutive 'unsuccesses' in his life. He was finally shown a glimmer of hope when his short story "King Pippin and Sweet Clive" was published in Cornhill Magazine. Editor James Payn encouraged him to continue his writing, though in novel form, for it was difficult to make a living with short stories. His next short story "Oliver Cromwell's Kinsfolk" which was published in the Historical Review was met with acclaim and gave him the encouragement he needed to persist as a writer.

In 1886, while travelling in the Pyrenees, he and a friend were arrested under suspicion of being Belgian spies. They were exonerated and the publicity led to Weyman's exposure as a writer. His first successful novel, inspired by Professor Baird's History of the Huguenots and H. Rider Haggard's style was The House of the Wolf set during the St. Bartholomew's Day massacre of 1572 in Paris, and published in 1890. It was serialised in Illustrated Magazine from 1888 to March 1889. The New Rector and The Story of Francis Cludde were published in 1891. By the time he was thirty-six, Weyman had travelled extensively. Henry Seton Merriman (pseudonym of Hugh Stowell Scott [1862-1903]) a fellow author, was a friend and traveling companion. Based on his travels in France and Spain, Weyman's article "Through the Pyrenees in December" was published in The English Illustrated Magazine in 1893.

Weyman wrote fifteen novels between 1890 and 1904 set in 16th and 17th century France. His blend of history and romance made him a best-seller. A Gentleman of France (1893) was deemed by New York World as "One of the best novels since R.D. Blackmore's novel Lorna Doone". It is a swashbuckling adventure surrounding the events of Henry of Navarre ascending the throne. It was said to be one of Robert Louis Stevenson's favourite novels. Weyman conducted extensive research at the London Library on the technicalities of fencing. From the Memoirs of a Minister of France (1893) is a collection of short stories starring Henry the IV's prime minister Duc de Sully. Under the Red Robe (1894), another swashbuckling tale of a gentleman rogue was widely acclaimed, dramatised for the stage in 1896, and also adapted for the screen. The Idler magazine published an interview with Weyman in 1895.

On 1 August, 1895 Weyman and Charlotte Kate Eliza Panting married at Great Fransham, Norfolk. They settled at 'Plas Llanrhydd' in Ruthin, North Wales. Besides raising cattle, horseback riding, fox-hunting on his mare 'Emerald', and cycling, Weyman would produce 1,000 words a day. The Long Night (1903), a horrifying supernatural thriller is set in 1600s Switzerland. In one of Weyman's last novels The Wild Geese (1908), he seems to reach the epitome of the ideal brave and strong man, Colonel John Sullivan preferring individual honour in death over a life without courage. During World War I Weyman retired from writing and became Governor of Ruthin School, and of Howell's School, Denbigh. He was also churchwarden and parish councillor, reading lessons at St. Meugans, Llanrhydd. Wondering if he was still popular, in 1919 he published under the pseudonym of Jefferson Carter, Madam Constantia, to a resounding success, and went on to write under his given name.

Stanley J. Weyman died on 10 April, 1928. He lies buried across the fields from his beloved home, in the parish churchyard of St. Meugans at Llandrhyd, Wales. In honour of his 100th birthday, his nephew Lt. Colonel Arthur Weyman had an elaborate memorial to him in the shape of books placed near the pew in the church where he used to sit.

"Above all I am grateful to my readers, to those who with me have ridden on phantom quests and wooed phantom brides, the band, faithful and generous, that, undeterred by disappointments and undiminished--in this country at least--by time, has remained with me to the end.--from The Works of Stanley J. Weyman, Volume I (1911) 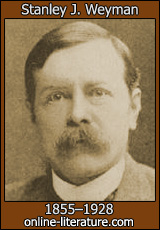 Here is where you find links to related content on this site or other sites, possibly including full books or essays about Stanley J Weyman written by other authors featured on this site.