Ivan S. Turgenev (1818-1883), Russian poet, playwright and author wrote Fathers and Sons (1862). Its central character Bazarov and his friend Arkady represent the nihilistic tendencies of the younger generation given to western free-thinking and revolt; "A nihilist is a man who does not bow to any authorities, who does not take any principle on trust, no matter with what respect that principle is surrounded." while fathers Vassily and Nikolai, and Pavel represent the older staid and traditional figure of Russia pre Revolution. Love and marriage enters the picture and causes much confusion and re-thinking of old and new values.

Ivan Sergeevich Turgenev was born in Orel province, Russia, on 9 November, 1818. The Turgenevs were wealthy landowners, and when Ivan's father died his domineering and abusive mother oversaw the running of the farms and their serfs. After attending University of St. Petersburg, Turgenev moved to Germany and entered University of Berlin. There he concentrated on studies of history and the philosophy chiefly of Georg W. F. Hegel (1770-1831). After a time working as a civil servant he met French singer Pauline Viardot with whom he had a lifelong affair. He set up residence in France and it was there that he began writing in earnest. Travelling often between Europe and Russia, Turgenev was arrested and imprisoned for suspicious revolutionary activities.

Unlike his contemporaries Fyodor Dostoevsky and Leo Tolstoy who wrote on matters of the church and religion, Turgenev focused more on the movement toward social reform. His depictions of Russian 19th century provincial life and its turbulent times of political upheaval were lauded by many fellow authors including Joseph Conrad and Henry James; he was also a great friend to many including French author Gustave Flaubert.

Ivan Sergeevich Turgenev died in exile in Paris on 4 September 1883. As a last wish his remains were taken home and buried in the Volkoff Cemetery, St. Petersburg, Russia.

Other Turgenev works include;

I've read Fathers and Sons by Turgenev and enjoyed it, but I'm not sure where to go next. I am interested in reading First Love and suspect this might be the direction, any other recommendations of something worth reading, maybe a little description or a few words on why? I'm interested in all kinds of classic literature and I've read most of the Russians and pretty big portions of their work. If by any chance anyone has read The Precipice by Ivan Goncharov I'd appreciate any kind of responses to it....

How does he compare to the other Russian big boys and what stories would you recommend?...

Amour, my love, you now, is not and I is same? The Liang Yong Qi's song, the waltz tune wind, the affection is exquisite, I liked, listening very much to be drunk, recently listened Ledu not any feeling, I wanted possibly to be pondered the literature completely was in the upper hand with the life reason. Spring vacation the younger brother came back, brings some MP3, I to download Liang Yong Qi, Sun Yanzi, Huang Hsiangi flew in circles with the expense, the inside sentiment has moved me, although the lyrics wrote writes all almost, not how, but occasionally listens or to be able to be infatuated with in inside. Actually I with originally like these stars, recently looked Hua Shih Sunday the...

Criticism of Turgenev goes along several lines. :cool: *He could never make up his mind which side of the fence he was on. :argue: *He was a lightweight :brow: *He glorified the radicals of his day and thus, deserves ill things said about Fathers and Sons. :rage: *He lampooned the radicals and really was a conservative in traditional Russia. :mad: *Dostoyevsky and others thought ill of him, he's a lesser author. :p So what do you think? Any of thse criticisms ring true or are undeservingly attached to him? :confused:... 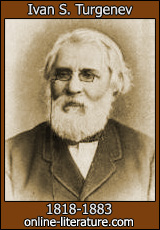 Here is where you find links to related content on this site or other sites, possibly including full books or essays about Ivan S. Turgenev written by other authors featured on this site.