Ten Nights was the biggest and most memorable success of Arthur's career, but his efforts and influence as an editor and publisher are no less important. Timothy Shay Arthur was born on 6 June, 1890, the son of William Arthur and Anna née Shay of Orange County, New York, U.S.A. The Arthurs moved to Baltimore, Maryland around 1817. Arthur was in frail health as a youngster so his mother took on the role of teacher, reading him the Bible stories and telling him many tales of the life of her father, Timothy Shay, an officer in the Revolutionary war.

When later attempts at academic proficiency proved poor on Arthur's part, he embarked on a course of self-education, including an apprenticeship with a Baltimore craftsman, though eye strain caused him to ultimately quit. Around 1833 he served for a few weeks with the Susquehanna Bridge and Banking Company before this venture failed. Around the same time he became involved with the Baltimore Athenaeum and Young Men's Paper as editor. He had found his niche in life. Three years later he started the Baltimore Literary Monument. In 1839 he began editing the Baltimore Merchant. It was during this period that Arthur learned of the Washingtonian Temperance Society and started attending meetings as a journalist, though he soon embraced their vision. The reformed alcoholics' movement gave inspiration for his Six Nights with the Washingtonians: A Series of Original Temperance Tales (1842). Fanny Dale; or, The First Year of Marriage (1843), The Seamstress: A Tale of the Times (1843), and The Tailor's Apprentice: A Story of Cruelty and Oppression (1843) followed.

Arthur was an active participant and quickly adopted the popular movement's Christian stance on the prohibition of alcohol. He soon became a well-known writer on morals, giving instruction, advice, and suggestions of self-help in one's striving towards "honour, success and happiness" as in The Allen House, or Twenty Years Ago and Now (1860). As a reporter he contributed to such journals as Godey's Lady's Book. From 1844 to 1846 Arthur was publisher of and contributor to Arthur's Ladies' Magazine. He was editor and publisher of his monthly Arthur's Home Magazine from 1852 to 1885. (Also called Arthur's Lady's Home Magazine and Arthur's Illustrated Home Magazine). In 1867 Arthur started his juvenile periodical Children's Hour. Two years later he founded the Workingman. In the late 1870's Arthur helped establish the Franklin Home for Inebriates in Philadelphia.

Arthur often appealed to women in order to cause social reform in the temperance crusade. In 1850 his The Lady At Home was published. In this work he assumed the perspective of an American woman, with the intent of fostering a kinder, gentler attitude towards one's servants;

".. to lift every true woman up, by teaching her rightly to look down upon those who have been providentially placed below her, and thus lifting her up, to elevate them also."

The Debtor's Daughter; or, Life and Its Changes and All's For the Best were also published in 1850. Ten Nights in a Bar-Room, and What I Saw There followed in 1854, rivalling the popularity of Uncle Tom's Cabin. It is a highly detailed account of life in the 19th century and the ills of tavern keeping, Arthur deftly weaving his political stance in a fast-moving journey that follows the character's exploits into drunkenness, debauchery, and murder. Ten Nights was adapted for the stage and became one of the longest running and most popular plays of the antebellum era. While theatre life often had an undertone of baseness to some because alcohol was sold on the premises, the play attracted a new audience of religious people who previously wouldn't consider participating in such social past times. Trials of a Needlewoman was published in 1853.

In The Good Time Coming (1855), Agnes; or, The Possessed. A Revelation of Mesmerism (1848) and The Angel and the Demon: A Tale of Modern Spiritualism (1858) explores other realms of spirituality, though he is accused of "verging on spiritualism and Swedenborgianism." He deals with the issue of divorce in The Hand but Not the Heart or The Life-Trials of Jessie Loring (1858). Woman to the Rescue (1874) was followed by Strong Drink; The Curse and the Cure (1877). Cast Adrift (1872) is a fictitious tale set in the cities' darkest ghetto, though Arthur asserts in the Preface that it contains a dire warning of true life's "stranger than the fiction" possibilities.

"The task I set for myself has not been a pleasant one. It has hurt my sensibilities and sickened my heart many times as I stood face to face with the sad and awful degradation that exists in certain regions of our larger cities; and now that my work is done, I take a deep breath of relief. The result is in your hands, good citizen, Christian reader, earnest philanthropist! If it stirs your heart in the reading as it stirred mine in the writing, it will not die fruitless."

Arthur not only contributed greatly to the social and moral fabric of his time, he wrote many books for children, books about history and advice works for men and women regarding marriage, ethics and divorce. Timothy Shay Arthur died in Philadelphia, Pennsylvania, USA on 6 March 1885, and is buried in the Woodlands Cemetery in Philadelphia. 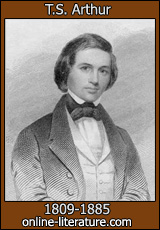 Here is where you find links to related content on this site or other sites, possibly including full books or essays about T.S. Arthur written by other authors featured on this site.