Thornton W. Burgess (1874-1965), American author, naturalist and conservationist, wrote popular children's stories including the Old Mother West Wind (1910) series. He would go on to write more than 100 books and thousands of short-stories including his newspaper column "Bedtime Stories" during his lifetime.

Thornton Waldo Burgess was born on 14 January 1874 in Sandwich, Cape Cod, Massachusetts. His mother was Caroline F. Haywood. His father, a traveling salesman, Thornton Waldo Burgess Sr. died when Thornton Jr. was an infant. No doubt the watery and rugged environs of the Cape and his exposure to the wildlife of the area created a lasting impression on Burgess when he was young. He spent much time exploring the flora and fauna, fishing and picking berries. When he was working to help support himself and his mother, one of his employers owned property near the Discovery Hill Road wildlife habitat which would become the inspiration for such future settings as Smiling Pool and Old Briar Patch.

After he graduated from the Sandwich High School in 1891, Burgess moved to Boston to attend Business College. Whilst taking odd jobs he got some exposure for his writing and his initiation into the publishing world came when a jingle and some short satires he wrote were used by the advertising trade magazine Brains. He also became a reporter for the Springfield Homestead. Collier's and Good Housekeeping also accepted some of his work. In 1905 he and Nina E. Osborne (1881-1906) married, with whom he'd have a son. She died a year later, leaving Burgess with the task of raising him on his own, though he also spent much time with relatives. While his son was away on such a visit he got the idea of putting to paper the bedtime stories he created for him, so his relatives could read them to him. His stories were soon in demand among friends and relatives, and at their urging Burgess submitted them to Good Housekeeping.

Peter Rabbit and friends came to life in his 1910 collection of stories Old Mother West Wind. It was followed by Mother West Wind's Children (1911) and Mother West Wind's Neighbours (1913). Though not as successful, The Boy Scouts of Woodcraft Camp (1912) was published with three volumes to follow. Fannie P. Johnson, who had two sons, and Burgess married in 1911. Harrison Cady (1877-1970), a life-long friend of Burgess' would illustrate his works. After Good Housekeeping was sold, Burgess moved on to writing prolifically for the New York Tribune syndicate as a freelancer. His daily newspaper column "Bedtime Stories", with such characters as Peter Rabbit, Jimmy Skunk, Bobby Raccoon, Joe Otter, Grandfather Frog, Jerry Muskrat, and Spotty the Turtle were soon being read in homes all over America. With lessons to be learned about life and the natural world around them, they are very much like the children that loved them, with families and conflicts, adventures and much fun to be had by all. Most of Burgess's works would be translated to French, Swedish, Chinese, German, Spanish, Italian, and Gaelic.

Burgess was a master at telling charming stories of well-dressed loveable creatures that captivated little boys and girls, but there is a very real and authentic tone to his works. He was an avid supporter of wildlife preservation and protection programs. For instance the Green Meadow Clubs and the Radio Nature League, a popular weekly radio show he started in 1924, was aimed at educating and creating awareness of animal and environmental issues that are just as relevant today. In 1925 he moved to Hampden, Massachusetts. He was awarded an Honorary doctorate in Literature on 20 June 1938 from Northeastern University. The Boston Museum of Science bestowed upon him a special gold medal "for leading children down the path to the wide wonderful world of the outdoors." His last publication was Now I Remember (1960), a memoir focusing on his early days in Sandwich and his life as a writer. He died on 5 June 1965 at the age of 91. He is buried in the Springfield Cemetery in Springfield, Hampden County, Massachusetts, alongside his first wife Nina.

The Thornton W. Burgess Society in Sandwich, Massachusetts was founded in 1976. The non-profit educational organization is "to inspire reverence for wildlife and a concern for the natural environment" which Burgess devoted his life to. The Green Briar Nature Centre is located in Sandwich, Massachusetts. Burgess's home in Hampden was purchased by the Massachusetts Audubon Society, which owns and operates it as the Laughing Brook Education Centre and Wildlife Sanctuary.

A Man Who Made the World a Better Place

Originally my father read me the storiestime and time again, according to my own popular demand. "Dad, you missed a whole sentence!" Whether he read me every one of the books, I don't know. Probably he did. Years later, I got hold of every one I could; and I'm sure I read them all, then. And years after that, I got hold of them again, and read them again. Mr. Burgess was a wonderful man, and he gave his wonders, like presents, to children and to other thinking, feeling humans. In many respects, Thornton W. Burgess was a "Mr. Rogers" of an earlier day. He made people happy, and he did it with wisdom. The gifts he gave were all wisdom, packaged in various kinds of sensitivity. Hi... 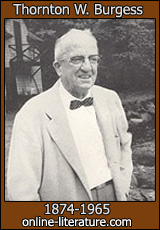 Here is where you find links to related content on this site or other sites, possibly including full books or essays about Thornton W. Burgess written by other authors featured on this site.