"Tom Bailey" in Story of a Bad Boy (1870) is based on Aldrich's own life when after living in New Orleans for a period of time he was sent back to his hometown of Portsmouth to enter college. He wrote it during a summer holiday in Portsmouth, fresh from a stint as Civil War correspondent, and reflecting on his late father's life and his own upcoming fatherhood. Straying from the popular moral tone many works of the day conveyed, it is a semi-autobiographical memoir and realistic portrayal of an all-American boyhood. Mark Twain is said to have been inspired by it to write Tom Sawyer.

Thomas Bailey Aldrich was born on 11 November 1836 in Portsmouth, New Hampshire. His father was a businessman, Elias Taft Aldrich, and his mother, Sarah Abba Bailey. At a young age Thomas started reading Lord Alfred Tennyson, John Keats, and Henry Wadsworth Longfellow, who inspired him to become a poet himself.

From 1849-1852 young Tom lived with his grandfather Thomas D. Bailey in the "Nutter House", now named Strawbery Banke's Aldrich Memorial in his honour. At the age of sixteen Aldrich moved to New York City to work with his uncle after his father died in 1852. He lived among and became friends with several other up-and-coming writers and poets of the time including Bayard Taylor, William Dean Howell, and Walt Whitman. His poems and short stories were beginning to get published in various newspapers and magazines including Harper's Monthly. The Bells: A Collection of Chimes (1855) was his first published collection of romantic poems, "The Ballad of Babie Bell" especially well-received and much lauded. The Course of True Love Never Did Run Smooth (1858) followed. Soon after he was appointed assistant editor with the Home Journal. He stayed there for three years before moving on to the New York Illustrated News in 1859. Whilst no doubt busy in his editorial duties, he still continued to prolifically write prose and his first novel was published in 1857, Daisy's Necklace: And What Came of It. Out of His Head (1862) is a selection of his stories.

Aldrich was fast becoming one of the most respected poets of the country. In 1865 Aldrich and Lilian Woodman married, with whom he'd have twin sons. They soon settled in Boston, though spent many summers in Portsmouth. Aldrich took up the position of editor with the popular weekly Every Saturday (where he remained until 1874). He was riding the wave of popularity and esteem he had earned throughout all of New England from such other poets as Nathaniel Hawthorne upon his release of Poems (1863). Story of a Bad Boy (1870) was his next major work which became a best-seller. Marjorie Daw and Other People (1873), Cloth of Gold (1874), Prudence Palfrey, a Novel (1874), and Flower and Thorn (1876) followed.

As a prolific writer, even his critics could praise his well-crafted tales, and Aldrich expressed an enviable scope of material in the poems, short stories and novels at the height of his career. After many years of writing exclusively for the Atlantic Monthly, in 1881 he became editor until 1890. An Old Town by the Sea (1883) is an evocative historical memoir and guide to his 19th century hometown of Portsmouth. Titles published in his later years included Two Bites at a Cherry, with Other Tales (1894), The Poems of Thomas Bailey Aldrich: The Revised and Complete Household Edition (1897), A Sea Turn and Other Matters (1902), Ponkapog Papers (1904), and A Book of Songs and Sonnets Selected from the Poems of Thomas Bailey Aldrich (1906).

Thomas Bailey Aldrich died at home in Boston at the age of seventy, on 19 March 1907. His widow Lilian oversaw the restoration of his childhood home, and wrote Crowding Memories (1920), which is a companion to his "official" biography Thomas Bailey Aldrich (1908) written by Ferris Greenslet.

Story of a Bad Boy

I just had to express my love of little Tom Bailey. Thomas Bailey Aldrich's book is a masterful expression of childhood, and you learn the naivete of Tom Bailey, the boy who is the child incarnation of the author. It's amazing how much of his childhood he remembers! I cried and laughed through the entire book, and I bothered my family to no end about the book. My sister claims to have read it. But she also claims to have read anything I've read.... 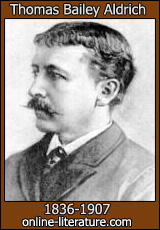 Here is where you find links to related content on this site or other sites, possibly including full books or essays about Thomas Bailey Aldrich written by other authors featured on this site.