"It was an advance, and as such, perhaps, some ladies of indisputable correctness and gentility will condemn the action as immodest; but, you see, poor dear Rebecca had all this work to do for herself. If a person is too poor to keep a servant, though ever so elegant, he must sweep his own rooms: if a dear girl has no dear Mamma to settle matters with the young man, she must do it for herself. And oh, what a mercy it is that these women do not exercise their powers oftener! We can't resist them, if they do. Let them show ever so little inclination, and men go down on their knees at once: old or ugly, it is all the same. And this I set down as a positive truth. A woman with fair opportunities, and without an absolute hump, may marry whom she likes. Only let us be thankful that the darlings are like the beasts of the field, and don't know their own power. They would overcome us entirely if they did."--Ch. 4

Satirising upper middle-class Victorian London, its societal mores, decadence and corruption, Thackeray contrasts the life of amoral social climbing Becky Sharp, who can cry or blush at will, with the sheltered and naive Amelia Sedley's. His mordant wit and fierce critique of his times caused much controversy but in the end his novel was a best-seller and remains in print today. It has also been adapted for television and the screen numerous times, with a black and white silent version in 1911.

William Makepeace Thackeray was born in Calcutta, India, in 1811, son of Richmond Thackeray, an Indian Civil Servant, and his wife Anne (née Becher). Just a few years later his father died, his mother remarried, and the shy and retreating young William was sent to England where he would deal with the harsh realities of isolation and bullying at Charterhouse, a private school in London. He then went on to attend Trinity College, Cambridge, then studied law at the Middle Temple school, but soon after went to Paris to unsuccessfully try his hand at painting. It was in Paris that he met and married Isabella Shawe (18161893) in 1836, with whom he would have two surviving daughters, Anne Isabella (b.1837) [who would become a writer] and Harriet Marian `Minnie' (b.1840).

Back in England and suffering massive financial losses, Thackeray started writing articles, reviews, essays and sketches as a journalist. Travel articles about France such as his Paris Sketch Book (1840) and The Yellowplush Correspondence (1841) were among his first efforts appearing in various magazines and journals including Fraser's, Punch, and The Times. He also illustrated many of his own works. After the birth of Harriet, Isabella started on what was to be, until her death, numerous bouts of depression, an extensive search for a cure, and ultimately a slow spiral to insanity. She would live apart from William, rarely seeing him or her daughters. Ever the doting father, Thackeray remained close to his daughters all his life. Anne was his secretary for a while and they both lived with him at his house in London before marrying. The disintegration of his marriage however would have a profound effect on his life and be reflected in the characters of his novels, including the loveless marriage between Rachel and Frank Castlewood in The History of Henry Esmond, Esq. (1852) and its sequel The Virginians (1857).

Haunting the Literary Clubs of London including the Garrick Club, Thackeray also travelled the Mediterranean, A Journey from Cornhill to Grand Cairo (1846) the result. Book of Snobs (1848) and Vanity Fair (1848) followed soon after, but it was not until The History of Pendennis (1850), his semi-autobiographical novel that Thackeray's success as a humorist was confirmed. He then embarked on a series of lectures published as English Humorists of the Eighteenth Century (1851) and Four Georges (1860), based on the Hanoverian Kings, from his tours of the United States in 1852-53 and 1855-56.

In 1860 Thackeray became editor of the monthly literary journal Cornhill Magazine, but died suddenly three years later, in 1863, at the age of fifty two. He lies buried beside his mother in the Victorian Garden cemetery Kensal Green in London, England. Charles Dickens wrote a glowing tribute to him in Cornhill Magazine. 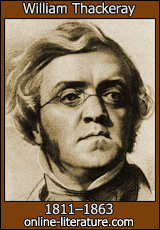 Here is where you find links to related content on this site or other sites, possibly including full books or essays about William Makepeace Thackeray written by other authors featured on this site.