Booth Tarkington (1869-1946), American playwright and author, won the Pulitzer Prize in 1919 for his novel The Magnificent Ambersons (1918) and again in 1922 for Alice Adams (1921), later adapted to the screen starring Katherine Hepburn.

Exploring the realms of middle-class, middle-America, romantic illusions and the power and corruption of wealth, Tarkington became a leading voice of his times through his memorable characters and social commentary in his novels and plays. Praised by the father of American realism William Dean Howells, Tarkington's Growth Trilogy, based on America's Industrial Expansionism started with The Turmoil (1915), then The Magnificent Ambersons, followed by The Midlander (1924). Dozens of his works were adapted to the stage and screen during his lifetime and as recently as 2002.

Newton Booth Tarkington was born 29 July 1869 in Indianapolis, Indiana, the son of Elizabeth and John Stevenson Tarkington, a lawyer and judge. He first attended Purdue University in Lafayette, Indiana, then Princeton in New Jersey where he was editor of the Nassau Literary Magazine. Ever the raconteur, he was immensely popular at school, and later earned an honorary Doctor of Letters in 1918. After having started writing at a very early age short stories and plays, he always knew he wanted to be a writer and upon finishing school put pen to paper in earnest.

Not disheartened by numerous rejections, Tarkington's persistence would soon pay off. His first novel The Gentleman from Indiana was published in 1899, followed by his historical romance Monsieur Beaucaire in 1900, which would later be adapted to the screen starring Rudolph Valentino. In 1902 he married Laurel Fletcher, but they divorced in 1911. The next year he married Susanah Kiefer Robinson, and though they would have no children, Tarkington was the ever doting uncle to his nephews. Their antics combined with his own fond boyhood memories, and his sharp wit and imagination resulted in his Penrod series; quintessential all-American boy tales. In a similar vein to Mark Twain's Tom Sawyer, Penrod (1914), Penrod and Sam (1916) and Penrod Jashber (1929) are similarly clever and comical adventures of mischievous youth constantly challenging the authority and perceived oppression of their elders. "..for Penrod had come into his twelfth year wearing an expression carefully trained to be inscrutable. Since the world was sure to misunderstand everything, mere defensive instinct prompted him to give it as little as possible to lay hold upon."--Penrod, Ch. 1

First serialized in the Saturday Evening Post, The Flirt (1913) was followed by Seventeen (1916), another of his many works to be adapted to the stage and screen. In 1922 Literary Digest named Tarkington "America's greatest living writer". With the success of his best-selling novels in North America and Europe, where he also travelled often, the Tarkingtons spent the summers at their estate in Kennebunkport, Maine, which inspired his Mirthful Haven (1930) and Marv's Neck (1932). Although he suffered from eye problems for a while, he continued to produce novels, dictated to his secretary. Other titles published during this period were Women (1925), The Plutocrat (1927), and his collection of autobiographical essays The World Does Move (1928). He also developed a keen interest in 17th and 18th century art of which he wrote about in Some Old Portraits (1939) and Rumbin Galleries (1934).

I dont suppose anyone has this book, or access to it and can tell me whats is in it? It was published Nov 2008 and Im concidering buying it ( although where are the 7 previous volumes?) If I just knew what was in it!...

Talking about Austen and grotesque caricatrures for some reson made me think of dear old Tarkington. ON another website someone wrote Under trakington "A very good category to have, particularly when you've already got works by the author... can't explain it. " I ve always agreed with that you understand it if youve read his books you never forget them and little things keep popping out at you a the oddest moments. Anyway What I really wanted to say was I love his works and if you enjoy good satire read some of his stuff Seventeen comes to mind esopecially at the moment. :D...

I would like to to see Booth Tarkington's Alice Adams and The Magnificent Ambersons.... 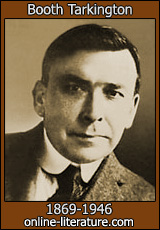 Here is where you find links to related content on this site or other sites, possibly including full books or essays about Booth Tarkington written by other authors featured on this site.