Edmund John Millington Synge was born on 16 April 1871 at Rathfarnham, near Dublin, Ireland. His father, a barrister, John Hatch Synge (1823–1872) died a year after he was born. His mother, Kathleen, née Traill (1838–1908) decided to move her family to Rathgar, in Orwell Park, next door to her own mother. Synge and his siblings Robert, Edward, Annie and Samuel spent the summers at a country rental home, the Greystones, in Co. Wicklow. Much more of a listener than a talker, young Synge, who suffered ill-health all his life spent much time outside watching birds and collecting their eggs around Rathfarnham Castle, outings that he kept a diary of.

I knew the stars, the flowers, the birds,
The grey and wintry sides of many glens,
And did but half remember human words,
In converse with the mountains, moors and fens--Prelude (1910)

He was very close to his cousin Florence Ross, who accompanied him on many of his daily explorations. Later in life he would join the Dublin Naturalist's Field Club.

Synge has written that the first crisis in his Protestant faith happened when he was very young, possibly around the time his father died of smallpox. Images of Hell struck fear in his heart and tormented him in waking and in dreams. He was grasping with the concepts of eternal pain and damnation. Reading the theories of Charles Darwin, especially his comparison of the similarities between a man's hand a bat's wing contributed to his confusion and doubt and he would later become alienated from his family over this.

When Synge was sixteen he started violin lessons studying under Patrick Griffith at the Royal Irish Academy of Music in Dublin. In 1888 he entered Trinity College, Dublin, studying Gaelic and Irish antiquities and graduated with a B.A. in 1892. After winning an award he went on to Oberwerth and Wurzburg, Germany and the Black Forest to continue his studies in music and literature, including the works of Henrik Ibsen. These are the years he had started writing plays, inspired in part by his unrequited love of Cherie (Cherrie) Marie Louise Matheson (1870–1940). She couldn't possibly see herself marrying a non-believer and refused him a number of times. Synge travelled extensively in France and Italy. Wanting to make art accessible to the common man, he formed the Irish Literary Society in 1892. In Paris, around 1896, he was to meet the poet William Butler Yeats who would become a lifelong friend and mentor. The black-haired intense Synge was fond of hill walking and they would often go on long walks together. Back in Dublin in 1897 a growth on Synge's neck was discovered and they operated. His hair began to fall out and he would wear a black wig afterwards.

Upon reading some of Synge's poems, Yeats advised him that he would never surpass mediocrity if he remained in Paris, so, intent on finding his writer's voice, he travelled back and forth from the continent to the rocky Aran Islands for a number of years to live with peasant seamen and their families. He practiced his Gaelic and absorbed the history and local folklore. Rife with black humour, In the Shadow of the Glen, based on an Aran story and set in Co. Wicklow, was published in 1903 and would later be adapted for the stage though initially it outraged Irish Nationalists. Celebrating the Irish transient and basic ways of life which had previously barely been touched upon in literary circles Riders to the Sea (1904) and The Aran Islands (1901, published 1907) were also inspired by his travels around Galway Bay. He also wrote travel sketches that would form the basis for many of his plays. Riders to the Sea, which some say is his most passionate work "on these islands the women live only for their children." would also be adapted for the stage. In 1905 he became a director of the Irish National Theatre Society along with Yeats and Lady Gregory. Synge became secretly engaged to the actress Molly Allgood in 1906 though they never married. The Well of the Saints (1905) has a supernatural element tinged with bitterness when an ugly and blind husband and wife are led to believe they're beautiful and handsome until they have their sight restored by a saint.

A 1907 a performance of The Playboy of the Western World (1907) caused riots in Dublin. The audience thought it slanderous to Irish women and that by implication Synge was saying it is heroic to kill one's father. The furore was very upsetting to Synge who was also suffering another period of ill-health at the time and, in 1908 was told that the growth in his side was inoperable. His marriage was delayed and his mother died in the autumn. He managed to continue work on Deirdre of the Sorrows (1910) and The Tinkers Wedding was published in 1908.

Before one of the operations on his neck and previously, Synge had expressed his anxieties about the fate of his manuscripts upon his death to his good friend William Butler Yeats. Yeats and Lady Gregory tried to oversee posthumous publications but there were some disputes.

Poems and Translations was first published (posthumously) in 1909.

"He was a drifting silent man full of hidden passion, and loved wild islands, because there, set out in the light of day, he saw what lay hidden in himself." from Synge And The Ireland Of His Time (1911) by William Butler Yeats

what are the symbols in riders to the sea

can you tell me the symbols in riders to the sea? and is there any irony in this play ?...

Synge and "The Curse"

A little acid from the author of Playboy of the Western World that was supposedly directed to the sister of an 'enemy' who disapproved of the play: The Curse by John Millington Synge Lord, confound this surly sister, Blight her brow with blotch and blister, Cramp her larynx, lung, and liver, In her guts a galling give her. Let her live to earn her dinners In Mountjoy with seedy sinners: Lord, this judgment quickly bring, And I'm your servant, J. M. Synge. I wonder if this play's still being performed? I guess it caused quite a raucous when it premiered.... 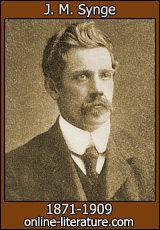 Here is where you find links to related content on this site or other sites, possibly including full books or essays about J. M. Synge written by other authors featured on this site.