Search
Advanced Search
Sun Tzu, Chinese general, circa 500 B.C. A collection of essays on the art of war is attributed to Sun Tzu. There are a growing number of translations of this Chinese classic, usually titled The Art of War.

Knowledge of Sun Tzu reached Europe shortly before the French Revolution in the form of a summary translation by Father J. J. M. Amiot, a French Jesuit priest. In the various translations, Sun Tzu is sometimes referred to as Sun Wu, and Sun Tzi. The most fundamental of Sun Tzu's principles for the conduct of war is that "All warfare is based on deception". Another key Sun Tzu principle is that "The supreme art of war is to subdue the enemy without fighting." Sun Tzu's ideas spread to the rest of Asia and to Japan.

The works of Sun Tzu have been widely known in the United States since the mid-1970s. Diplomat Henry Kissinger has made reference to Sun Tzu and the principles for the conduct of warfare has been the subject of serious study in U.S. military circles for many years. The Art of War as applied to business, sports, diplomacy and personal lives has been popularized in American business and management texts. Sun Tzu may be the most frequently quoted Chinese personality in the world today.

Hello! I was planning to buy Sun Tsu's classic "The Art of War" but I unfortunately get confused due to dozens of different versions of the original text reaching from plain text translations to such that contain bloated psychological "self-help motivational" comments having barely anything to do with the original text. After some research I found three versions, whereas two versions are from the same author but with different publishers. Version 1: Title: The Art of War Involved: B. H. Liddell Hart (Contributor), Samuel B. Griffith (Translator) Publisher: Publisher: OUP USA; New Ed edition (16 Mar 1971) Version 2: Title: The Art of War: The New Illust... 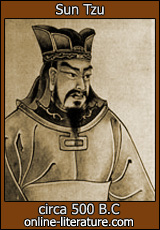 Here is where you find links to related content on this site or other sites, possibly including full books or essays about Sun Tzu written by other authors featured on this site.