Edward Stratemeyer was the youngest son of the six children of German tobacconist Henry Julius Stratemeyer and Anna Siegal. He was born in Elizabeth, New Jersey on 4 October 1862. He immersed himself in the popular books of the day including Horatio Alger's and William T. Adam's. After completing high school he went to work in his father's store. He had his own printing press and wrote short stories, distributing them to friends and family, including Revenge! or, The Newsboys Adventure and The Tale of a Lumberman. After a few amateur attempts to get wider exposure, he finally sold a story, Victor Horton's Idea (1888) to the popular children's paper Golden Days for seventy-five dollars.

And thus his professional career began. In 1890 Stratemeyer moved to Newark, New Jersey, and ran a stationary store, while continuing to produce stories under various pseudonyms. He covered many genres including detective dime novels, westerns, and serials run in story papers. A few years later he became editor of Good News. Stratemeyer married Magdalene Van Camp in 1891, with whom he'd have two daughters, Edna and Harriet. Richard Dare's Venture (1894-the first of his Bound to Succeed series) was his first published full-length book with autobiographical content along the lines of one of Alger's rags-to-riches formula.

Under Dewey at Manila (1898) was the first successful novel in his Old Glory series based on the Spanish-American War. A year later he introduced his Rover Boys series. In 1899 Horatio Alger, in failing health, wrote Stratemeyer as editor of the Good News to finish one of his manuscripts. After he died the same year Stratemeyer took on the task of finishing several more. Around 1905, under his newly formed Stratemeyer Literary Syndicate, he enlisted the assistance of other authors, mostly journalists, to flesh out a number of serial proposals he had started. They were paid a flat rate per book and he retained all copyright. The writers were to remain anonymous under their pen names, which caused much controversy and confusion in later years in discerning just actually who was behind most of the works.

Stratemeyer was a savvy businessman at heart. His introduction of fifty-cent novels sent sales through the roof, undercutting his competitors and creating a boon in the market for writers and buyers alike. Kids were hooked on his series that provided much escape and entertainment, a direction leading away from previously popular books with a moral tone. For the remainder of his life Stratemeyer busied himself with the introduction of new plot lines, delegating work to writers and illustrators, editing proofs, and negotiating with publishers.

On 10 May 1930 Edward Stratemeyer died in Newark, New Jersey. The Syndicate fell into the hands of his daughters Harriet Stratemeyer Adams (1892-1982) and Edna Camilla Stratemeyer (1895-2002). Edna moved to Florida soon after, and Harriet became a competent businesswoman, contributing as a writer herself to a number of the Nancy Drew series. 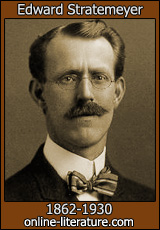 Here is where you find links to related content on this site or other sites, possibly including full books or essays about Edward Stratemeyer written by other authors featured on this site.