While giving a human face to slavery and remarkably addressing the oppression of African Americans Who so low, who so poor, who so despised as the American slave?(The Life of Harriet Beecher Stowe pub.1889, ch. 1.) it has also proven to be a lasting and influential literary work for political, spiritual, and humanitarian causes. First published in the anti-slavery newspaper The National Era in 1851, it soon became a best-seller and launched Stowe as an internationally recognised celebrity. Stowe was an intense though modest woman who would devote her life to education and good, honest, and compassionate works for others.

Harriet Elisabeth Beecher Stowe was born 14 June 1811 in the New England town of Litchfield, Connecticut. Her mother was Roxanna née Foote (1775-1816); her father Lyman Beecher (1775-1863) was a Calvinist preacher who spoke out against slavery and encouraged the education of his children. The Beechers were a large and happy familyHarriet had three sisters and five brothers: Catherine Esther (1800-1878), William Henry (1802-1886), Edward (1803-1895), Mary Foote (1805-1900), George (1809-1843), Harriet (1808-1808), Henry Ward (1813-1887), and Charles (1815-1900). Roxanna who, like her husband, touted the importance of a proper education, taught her children to read and entertained them with the stories of Maria Edgeworth. Just before Harriet turned four her mother died. While Harriet would not have many specific memories of her, she had the overall impression from the rest of her siblings, her father, friends, and the community that she was well-loved and admired by all. She had also bestowed her patience, compassion, and love of doing good works for others onto her daughter.

The loss of Mrs. Beecher was a dark time for her husband and children. Harriet was sent to stay with her High Church Aunt Harriet Foote who lived in Nut Plains, near Guildford, Connecticut. Under her tutelage young Harriet learned the catechism, read her prayer book, the Bible, works by Samuel Johnson, and Arabian Nights. When she was six, her father remarried. An extremely pious woman, Harriet née Porter soon gained the affections of all the children. With Lyman she had a son Frederick (1818-1820), who died of scarlet fever and a daughter Isabella (1822-1907). Young Harriet was often entrusted to care for her when she was not attending classes at the Litchfield Academy under Mr. Brace. Harriet was becoming a voracious reader and competent writer, while also learning the practical arts of knitting and sewing. The Beecher household was bustling and happy once again.

In 1824 Harriet moved to Hartford, Connecticut to attend the Hartford Female Seminary run by her eldest sister Catherine. It was an innovative institution, focusing on the importance of womens education in matters of home economics and student government. Harriet studied composition, Italian, French, and Latin, and developed a great love of poetry. After a time she also worked as an assistant teacher there. While on vacation at home in Litchfield in the summer of 1825 she had a spiritual awakening after attending one of her fathers sermonsshe now became a devout Christian, giving herself to Jesusthe agonies and confusion of her convictions resolved. The next year her father moved to Boston, Massachusetts and Harriet soon joined him there. In 1832 the Beechers moved to Cincinnati, Ohio where Lyman was appointed President of the Lane Theological Seminary. Their home, located on Gilbert Avenue, is now a National Historical museum.

It was while living (from 1832-1850) in Cincinnati that Harriet and her husband encountered first-hand the reality of slavery; bordering the slave state Kentucky, they met escaped slaves and heard stories of their appalling treatment and desperate plight for freedom. There was much public outcry against slavery, the Underground Railroad was formed, pamphlets were published, riots broke out, and mobs tried to wield their power politically, either for or against. In 1839, when Harriet and Calvin learned that their own servant girl, whom they thought was a freed slave, was being hunted by her Kentucky owner, Calvin and Harriets brother Henry Ward drove her through the night to a friends home to hide.

Stowe continued to write for magazines but she was also forming ideas for Uncle Toms Cabin. Calvin, who was active in the public education system and often traveled for work, was always very supportive of Harriets literary career. She joined the Semi-Colon Club, a literary group where they discussed and critiqued one anothers writings. While teaching with her sister Catherine she had co-authored An Elementary Geography (1833), but her first novel The Mayflower was published in 1843.

While a cholera epidemic was ravaging Cincinnati in 1849, Calvin was suffering ill-health and sought a cure at Brattleboro. Harriets health was also suffering from the stress of overwork with her various charities and tending to her sick children. Her youngest child Charley died of cholera in July of 1849; Our Charley would be published in 1858. From 1850 to 1852 the Stowes lived in Brunswick, Maine, where Professor Stowe joined the staff at Bowdoin College, his alma mater. Their home, known as the Harriet Beecher Stowe House, is now owned by the College. The same year they had moved, the Fugitive Slave Act was enactedit was now a crime to assist runaway slaves. The following year the first serial issue of Uncle Toms Cabin appeared in the Era. Stowe wrote to fellow author and abolitionist leader Frederick Douglass (1818-1895) for advice on the series. It was attracting growing attention, including Boston publisher John P. Jewett. He proposed a book publishing deal before Harriet had even finished her series. The popularity of the novel brought celebrity to Stowes lifeshe was invited to speak about her novel, slavery, and emancipation in cities across North America and Europe. However she was not without her critics: controversy over her portrayal of the South led to various publications presenting a kinder, gentler South, but they never attained the degree of acceptance or popularity as Stowes work. She wrote The Key to Uncle Tom's Cabin (1853) in her defence. The same year the Stowes moved to The Cabin in Andover, Massachusetts where Calvin was appointed professor of Theology at Andover Theological Seminary. While Harriet continued her various philanthropic efforts to help slaves including establishing schools for them, she continued to write articles and columns for newspapers and wrote novels: Sunny Memories (1854) was followed by her story of slave rebellion Dred: A Tale of the Great Dismal Swamp (1856), and Ministers Wooing (1859).

During these later years Harriet also embarked on an ambitious reading tour for the American Literary Lecture Bureau of Boston. During her reading tours and travels in Europe she had met many fellow writers including George Eliot, Robert Browning and his wife Elizabeth Barrett Browning, Lord George Gordon Byron and his wife Anne Isabella MilbankeLady Byron. When she found out about Lord Byrons incestuous relations with his half-sister she wrote Lady Byron Vindicated (1870) and The History of the Byron Controversy (1871).

Harriet Stowe was admired by, friends with, and corresponded with many famous figures of her day including then American President Abraham Lincoln, Prince Albert, the Duke of Argyll, authors John Ruskin, Nathaniel Hawthorne, Oliver Wendell Holmes and Charles Dickens, and poet Henry Wadsworth Longfellow. She either sent them copies of Uncle Toms Cabin and expressed her hopes that they would support the anti-slavery cause, or they wrote to her letters of support and encouragement after reading her famous novel. On her seventieth birthday, 14 June 1882, she was fêted at a garden party held by her Boston publishers Messrs. Houghton, Mifflin & Co. It was attended by over two hundred guests, the cream of Americas literati. Toasts, speeches, letters, and poems were read in honour of Stowe, her life and works.

Thoroughly and shamefully overlooked by most classes and educators, this work in and of itself is easily the equal of Uncle Tom's Cabin, though without the social upheaval and fanfare. Has anyone out there other than me actually read it and what did you think of it? It is quite easily my favorite secular book....

Uh, can anyone answer this question? What developments during this period prompted Kentuckians to seek tighter legislation against those helping runaway slaves?...

Her children: In Ohio, she met Calvin Stowe, a professor of Biblical Literature at Lane and clergyman who fervently opposed slavery. He was nine years her senior and the widower of her dear friend, Eliza Tyler. They married in 1836 and eventually had seven children, four of whom died during her lifetime. Samuel Charles, "Charley" died at eighteen months from cholera and an older son, Henry, drowned while a student at Dartmouth College. Years later, their son Frederick, an alcoholic from the age of sixteen, died, never really recovering from the wounds he sustained at Gettysburg in the Civil War nor being able to cope with his mother's success. Daughter Georgiana, married... 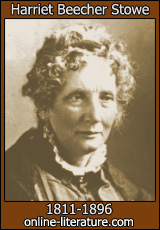 Here is where you find links to related content on this site or other sites, possibly including full books or essays about Harriet Beecher Stowe written by other authors featured on this site.