Stewart White (18731946), American author and conservationist wrote The Blazed Trail (1902), as well as many other works of a metaphysical nature, works of history, travel and adventure books, children's books, essays, and short stories. His books were often of a motivational nature, and squarely based on his own life's experiences, many of them based in the American west.

Stewart Edward White, the son of Mary E. Daniell and Thomas Stewart White, successful lumberman, was born on 12 March 1873 in Grand Rapids, Michigan. Young Stewart was privately tutored, even when the family was travelling. As an avid outdoorsman, Thomas Stewart, who didn't believe his son could make a career of writing, played a large part in educating his son and introducing him to the study of birds. He developed an avid interest in nature, hunting, camping and hiking and soon came to greatly admire his father's .. energy, vitality, honesty, good judgment, and virility.

In 1891 White graduated from Central High School in Grand Rapids. He continued his naturalist studies in the area, collecting bird skins, stuffing specimens, and writing articles, including a pamphlet on the birds of Mackinac Island that the Ornithologists' Union published. He would later buy a beach near Santa Barbara, California to turn it into a preserve, calling it Sandyland. He graduated from the University of Michigan, Phi Beta Kappa, in 1895 with a degree in Philosophy. He had an impressionable stint working as a lumberjack among the White Pines of Michigan in 1901, writing for a few hours every day in the early morning.

By 1903 he had earned his M.A. from Columbia University. Another notable occupation was his working at a mine in South Dakota for six months, prospecting for gold in the Black Hills. White took a literary composition course while at university, and encouraged by his professor was paid for his story A Man and His Dog by Short Story magazine. His first novel was The Westerners (1901), inspired by his Black Hills experience. The Claim Jumpers (1901) was followed by The Blazed Trail (1902).

The Westerners and The Claim Jumpers are melodramatic westerns with autobiographical details, and were highly praised though London critics found The Westerners too morbid. The Blazed Trail became a best-seller and is his most famous work. A bit of a muckraking work exposing the seedy underbelly of the lumber trade, its the story of a self-reliant man coming to terms with his environment. It was later included in Gregg Press's 1968 series of American Novels of Muckraking, Propaganda and Protest.

In 1903 White moved to Santa Barbara, California, where his parents lived. A year later, on 28 April 1904, he married Elizabeth (Betty) Calvert Grant of Rhode Island; they had no children. They camped in the Sierras for their honeymoon then settled in Burlingame, California. White dedicated many of his books in honour of her, the guide Billy. Theodore Roosevelt soon became a great friend of White's and they toured the state together. Roosevelt said of White, he's the kind of young American who is making our new literature. White was soon included in the same school of writers as Jack London and Rex Ellingwood Beach. During World War I White enlisted in the 144th Field Artillery and became a major. White was elected a fellow of the Royal Geographical Society for his work on mapping German East Africa (Tanzania) in 1913. He also became a member of the National Institute of Arts and Letters, and the American Academy of Arts and Letters.

The Forest (1904), The Mountains (1904), The Pass, Camp and Trail, The Silent Places (1907), Arizona Nights (1907), and The Riverman (1908), an adventure romance of lumbermen, are some of the many titles of White's dealing with the outdoors and summer pursuits. He was an avid traveller, often roughing it in such far places as Africa and Alaska. He strove for authenticity in his writing, not wanting to appear boastful of his triumphs. The Rediscovered Country (1915) was one of his many works on such travels, this time through the Serengeti. It is said that White, accompanied by another hunter, A.J.Cunningham, wrote the first definitive and widely acclaimed account of the Northern Serengeti.

Never have I seen anything like that game. It covered every hill, standing in the openings, strolling in and out among groves, feeding on the bottom lands, singly, or in little groups. It did not matter in which direction I looked, there it was; as abundant one place as another. Nor did it matter how far I went, over how many hills I walked, how many wide prospects I examined, it was always the same. During my stay at the next two camps I looked over fifty square miles. One day I counted 4,628 head! And suddenly I realized again that in this beautiful, wide, populous country, no sportsman's rifle has ever been fired. It is a virgin game country, and I have been the last man who will ever discover one for the sportsmen of the world. There is no other available possibility for such a game field in Africa unexplored. I moved among those hordes of unsophisticated beasts as a lord of Eden would have moved.

The Land of Footprints was published in 1913;

As there happened to be gathered, at this time, several thousand of warriors for the purpose of a council, or shauri, with the District Commissioner we had just the audience to delight our barbaric hearts.

White worked for a time in Arizona at Captain W. H. McKitticks ranch as a cowboy and learned to ride horses. Arizona Nights was based on his extensive journal kept at the time on folklore and cowboy vernacular. White would produce many fiction and non-fiction works on the history of California including Gold (1913), The Gray Dawn (1915), and The Rose Dawn (1920). The Cabin (1922) was followed by Daniel Boone, Wilderness Scout (1926), an inspiring coming-of-age tale of Long Knife the great hunter, in his trailblazing from Indian territory to Kentucky and a fearless, ideal man, recommended reading by the Boy Scouts of America. He also wrote many books for children and his autobiographical Dog Days (1930) and Speaking for Myself (1943).

In March of 1918, Stewart and his wife Betty attended a party where a Ouija board was brought out and thus began their introduction to the spirit world, Betty becoming somewhat of a medium to the Invisibles, anonymous entities communicating messages through her in automatic writing. The result was the Betty Book (1937) and later The Unobstructed Universe (1940) which was based on communications he received through a medium from Betty, who had died in 1939. It is an undisputed classic of the psychic exploration genre.

In answer to the desperate need of a stricken world, this book offers a new pattern for individual and social living...based on recapture of faith, not in the 'there ness' of immortality, but in its 'here ness'.

White would write a number of other books based on the Betty material including The Stars Are Still There (1946).
White died in San Francisco on 18 September, 1946. The New York Times and Chicago Tribune published obituaries. A grove of sequoias on California's Redwood Coast was named in honour of White.

The BEST author on the metaphysical

The books of Stewart Edward White on his and Betty's efforts into metaphysics are simply the best out there. Though they are 60-85 years olf now, nothing since then has surpassed them. The Unobstructed Universe (TUU) is the single best book in the genre, IMHO. I am no pushover (I am an engineer), and I have no patience for New Age gurus. Curiosity got me interested in this area as a young man, and I was lucky to have found such a solid effort very early in my inquiring. I still use the information from TUU to weed out garbage, and there is plenty in this field. But not Stewart Edward White's work. It is too bad that someone hasn't followed up on the work he and Betty did. The ... 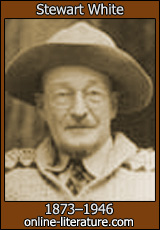 Here is where you find links to related content on this site or other sites, possibly including full books or essays about Stewart Edward White written by other authors featured on this site.