On either side of the broad beach before them the cocoa-nut trees came down like two regiments, and bending gazed at their own reflections in the lagoon. Beyond lay waving chapparel, where cocoa-palms and breadfruit trees intermixed with the mammee apple and the tendrils of the wild vine. On one of the piers of coral at the break of the reef stood a single cocoa-palm; bending with a slight curve, it, too, seemed seeking its reflection in the waving water. But the soul of it all, the indescribable thing about this picture of mirrored palm trees, blue lagoon, coral reef and sky, was the light.--Ch. XII, Part II

Henry had chronic bronchitis (which was misdiagnosed by his doctor as severe respiratory problems when he was a child) but, in 1871 he, his mother, and three sisters moved to Nice in the south of France to the Hotel des Iles Britannique, in hopes that his health would improve. It was like paradise to young Henry, but not to last for long. After some travelling, Henry was sent to Portarlington boarding school among rough and tumble boys who often treated the frail boy harshly and cruelly. Henry was then off to Malvern College in London, a progressive city school which was much more enjoyable for him. He settled in and began studying literature and writing. Next he studied medicine at St. George's Hospital, then University College, and finally finishing his degree at St. Mary's Hospital. He graduated L.S.A. in 1891.

For many years after his graduation, Stacpoole travelled extensively, including as a ship's doctor on many voyages. Undoubtedly his days at sea were to provide much fodder for his future stories and characters. His writing career began with the publication of The Intended (1894), a tragic novel about two look-alikes. His second novel is set in France during the Franco-Prussian war Pierrot (1896). Death, the Knight, and the Lady was published in 1897. Stacpoole spent the summer of 1898 in Somerset, England, after taking over the country practice of an ailing doctor which resulted in his writing The Doctor (1899). He declared it to have been the best book he ever wrote. Stacpoole says "Public Indifference" killed any chance of success for The Rapin (1899), about an art student in Paris. He also translated the works of poet Sappho and François Villon and wrote a biography of Villon.

Enjoying his pastoral life as country doctor, the world-weary Stacpoole imagined how it would be to come forth into the world and see things for the very first time, to marvel at nature's glory in thunderstorms, revel in a new-born baby, events that were commonplace to him now, and so he set to writing The Blue Lagoon which allowed him to live vicariously through it's characters. While he was influenced by Lewis Carroll's Alice's Adventures in Wonderland (1865), there are also parallels to the biblical Adam and Eve. Continuing the Lagoon story, The Garden of God (1923) and The Gates of Morning (1925) followed.

When Stacpoole finished The Blue Lagoon, which was an immediate success, he moved to Cumberland for a time to assist another country doctor. Anxiously anticipating their upcoming nuptials, from Eden Vue he wrote everyday to his fiancée Margaret 'Maggie' Robson (d.1934). They were married on 17 December, 1907. They had no children. Their honeymoon was spent at a friend's place in the country, Stebbing Park. It was at this time that Stacpoole happened upon Rose Cottage where he was to reside for many years before moving to the Isle of Wight in the 1920s. Many years later he was to dedicate a pond to the village of Bonchurch, Isle of Wight, in memory of the late Maggie. In 1938 Henry married the sister of Margaret, Florence Robson (d. 1961).

Stacpoole's novel The Man Who Lost Himself (1918) was a commercially successful comic novel about a down-and-out American impersonating his wealthy look-alike in England. It was also adapted to film. Stacpoole saw his autobiography Men and Mice (1863-1942) published in 1942. The success of The Blue Lagoon saw it reprinted more than twenty times in twelve years. The story was adapted as a play and film versions were made in 1923, 1949, and 1980.

Henry de Vere Stacpoole died on 12 April, 1951 and is buried at the new parish churchyard, Bonchurch, Isle of Wight, England. 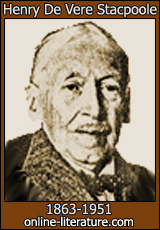 Here is where you find links to related content on this site or other sites, possibly including full books or essays about Henry De Vere Stacpoole written by other authors featured on this site.