Heidi, an orphan living in a cottage in the Alps with her grandfather deals with many of the issues children and adults can relate to. He is overprotective, and she ends up spending much free time with Peter in the meadows. When she moves to Frankfurt, Germany to live with Klara, she has a difficult time adjusting to the confinement of the city and discipline of education. Much like Spyri experienced in real life, Heidi becomes homesick for the freedom and fresh air of the country. When she returns with Klara, there is jealousy and conflict intermingled with the individual pains of growing up. Heidi has sold millions of copies, inspired many movies, cartoons, television series, and is translated to over forty languages.

Johanna Louise Heusser, the fourth of six children of Meta Schweizer (1797-1876) and Johan Jakob Heusser (1783-1859), physician, was born on 12 June 1827 in the village of Herzil, nestled in the Alps of Switzerland. She went to school and was tutored at home, then studied languages and piano in Zürich. In 1852 she married lawyer Bernhard Spyri (1821-1884) with whom she'd have a son, Bernard Diethelm (1855-1884). The couple moved to Zürich to a home overlooking the lake where she wrote her first novel A Leaf on Vrony's Grave which was published in 1871.

It was in 1880 that Spyri received much acclaim for Heidi, though she had already published many short stories for children and adults. Tragedy struck in 1884 when both her husband and son died. She busied herself raising a niece, doing charity work, and writing many more stories that were published but never quite attained the popularity of Heidi

Johanna Spyri died on 7 July 1901 Zürich and is interred in the family plot at the Sihlfeld-A Cemetery in Zürich, Switzerland. In 2001 there was a CHF commemorative coin minted in Spyri's honour. The Heidi Foundation was established in 1999 "to promote and publicize the story of Heidi, as conceived by the author, Johanna Spyri, all over the world."

I've really enjoyed reading Heidi, though it's been a while now. Maybe one thing that I like about the story is the mountains, and I love my mountains. Heidi is a simple girl, and I appreciate simple living. Goat milk, cheese, bread, and sausage sounds like a rather good diet to me. :cool: Any thoughts?... 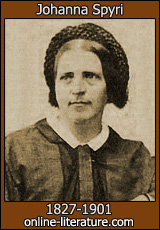 Here is where you find links to related content on this site or other sites, possibly including full books or essays about Johanna Spyri written by other authors featured on this site.