Sherwood Anderson (1876-1941), American author, poet, playwright, essayist, and newspaper editor, wrote Winesburg, Ohio (1919), "The Book of the Grotesque". A collection of excellent examples of the short story genre and set in small town America, the stories are loosely connected by journalist George Willard writing of the sometimes "grotesque" sides of the human condition including poverty, marginalisation, love and romance. Many of Anderson's contributions to American Literature reflect his own struggles between the material and spiritual worlds as husband, father, author, and businessman and also cover issues as wide-ranging from labour conditions to marriage.

Sherwood Anderson was born on 13 September 1876 in Camden, Ohio to parents Irwin McClain Anderson and Emma Jane Smith. After many years during which the family traveled for Irwin to find work and Sherwood only periodically attending school, he moved by himself to Chicago, Illinois. He attended night school and worked various jobs including farm laborer, factory hand, and newsboy. He was a successful ad copywriter and served in the Spanish American War (1898-9).

Early on he was writing his own poetry and short stories, influenced by such notable authors as Carl Sandburg and Gertrude Stein. Possibly because of his early transient life and often straightened circumstances he became known for his stories that gave a voice to small town American characters and their plight with finding the American Dream. In Ohio, Sherwood met and married Cornelia Lane in 1904 with whom he'd have three children, Robert, John and Marion. A few years later he founded the Anderson Manufacturing Company, a successful firm carrying a popular product called "Roof-Fix". He enjoyed the fruits of the bourgeois lifestyle of family and a stable income but it was not long before he suffered a nervous breakdown and divorced Lane.

Back in Chicago he focused on writing again, his first novel published when he was forty, Windy McPherson's Son (1916). The same year he married Tennessee Mitchell. Marching Men (1917) and Mid-American Chants (1918) followed. Hugh McVey, inventor, is the main character of Poor White (1920). The Triumph of the Egg: A Book of Impressions from American Life (1921) followed. Many Marriages (1923) was followed by his autobiography A Story Teller's Tale (1924). He married Elizabeth Prall in 1923.

In 1925 the Andersons settled in Grayson County near Troutdale, Virginia, where he purchased property and built a house he called "Ripshin" after the adjacent creek. In Dark Laughter (1925) was followed by Tar: A Midwestern Childhood (1926) and Sherwood Anderson's Notebook (1926). A year later he purchased the Marion Publishing Company of Marion, Virginia. Hello Towns! (1929) contains some of his editorials and sketches. It was followed by Beyond Desire (1932) and Death in the Woods (1933). The same year he married Eleanor Copenhaver, with whom he traveled extensively in North America and beyond. In 1937 he published Plays, Winesburg and Others. His last work is an extensive essay entitled Home Town (1940).

Sherwood Anderson died of peritonitis on 8 March 8 1941, whilst travelling in Colon, Panama. He lies buried at the Round Hill Cemetery in Marion, Smyth County, Virginia. His epitaph reads "Life not death is the greatest adventure". Many of his works are still in print.

Hey everybody~ am new here, searching some information by google and by chance found this, it's a really nice forum~ I have to write a paper on Sherwood Anderson, but i found so little critics and resources about him and his works, anybody knows something about that? Thousands of thanx for you~~~:yawnb:...

Ok . . . . this is the Winesburg, Ohio thread. Seeing as how there haven't been any threads created for Anderson yet, this one can be diverse. We can talk about favorites - characters, themes or happenings. Any questions or thoughts are welcome here!... 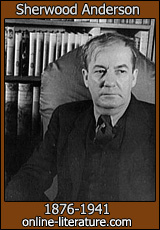 Here is where you find links to related content on this site or other sites, possibly including full books or essays about Sherwood Anderson written by other authors featured on this site.