Rohmer was born on 15 February 1883 in Ladywood, Birmingham, West Midlands, England, to Irish immigrant parents William Ward and Margaret Mary, née Furey. He adopted the middle name Sarsfield after tales his mother told him of being a descendant of Irish General Patrick Sarsfield. He changed his name several times over the years, his work appearing under various pseudonyms, Michael Furey being another. Early on Rohmer showed an interest in writing, with themes such as alchemy, mysticism, and magic. Some of his short stories were published in various newspapers and magazines of the day. One of them, Pearson's Weekly published his The Mysterious Mummy in 1903. He continued to write freelance for a number of years, including works for the stage where he possibly met Rose Elisabeth Knox (1886-1979) whom he married in London in 1909.

1900's London was dealing with the "yellow peril" question, a term evolved from the imagined threat and racial bias concerning Asian immigration. Films and books as well as the politics of the day reflected this attitude. From Ch. II The Insidious Dr. Fu Manchu (1913);

"Imagine a person, tall, lean and feline, high-shouldered, with a brow like Shakespeare and a face like Satan, a close-shaven skull, and long, magnetic eyes of the true cat-green. Invest him with all the cruel cunning of an entire Eastern race, accumulated in one giant intellect, with all the resources of science past and present, with all the resources, if you will, of a wealthy government-- which, however, already has denied all knowledge of his existence. Imagine that awful being, and you have a mental picture of Dr. Fu-Manchu, the yellow peril incarnate in one man."

Heady words for heady times. From the thriving merchant trade Chinese communities were established in London's Limehouse district, populated partly by dockworkers and sailors. Tales of opium dens, illegal immigration, corruption, and death were rampant topics in the news and intoxicating material for readers and novelists including Arthur Conan Doyle and Oscar Wilde. Rohmer's The Insidious Dr. Fu Manchu profited from these morbid worrying expansionist effects. The evil genius and his wickedly sadistic and cunning daughter Fah Lo Suee fight the Western powers embodied in Commissioner Denis Nayland Smith and Dr. Petrie. Mysterious Eastern instruments and shadowy evil figures are at their disposal. The novel was an instant best-seller.

Sax Rohmer died on 1 June 1959 in London. He lies buried with his wife and parents in the Kensal Green Catholic cemetery of London, England. 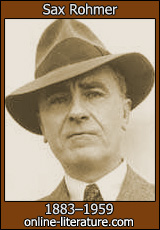 Here is where you find links to related content on this site or other sites, possibly including full books or essays about Sax Rohmer written by other authors featured on this site.