Three men sat in the Cosmic Club discussing the question: "What's the matter with Jones?" Waldemar, the oldest of the conferees, was the owner, and at times the operator, of an important and decent newspaper. His heavy face wore the expression of good-humored power, characteristic of the experienced and successful journalist. Beside him sat Robert Bertram, the club idler, slender and languidly elegant. The third member of the conference was Jones himself.

Samuel Hopkins Adams was born in Dunkirk, New York State on 26 January 1871, the son of Minister Myron Adams and Hester Rose. Hopkins entered Hamilton College in Clinton, New York in 1887. Upon graduation he remained a loyal alumnus and served as Trustee between 1905 and 1916. His future investigative work as a journalist led to his receiving an honorary doctorate of humane letters in 1926.

After school he was employed with the New York Sun as a journalist for a number of years, during which he married Elizabeth Ruffner Noyes in 1898. They would have two daughters. McClure's magazine was an up-and-coming, cutting-edge journal with insightful, accurately reported, human edge articles, and Adams joined them in 1900. It was there that he first met his life-long friend and fellow muckraker, Ray Stannard Baker, who’s writing style was also that of heavily researched scientific articles. Adams quickly entered the fray of muckrakers, reporting on U.S. public health issues. In 1905 he joined Collier's Weekly and wrote a series of articles on controversial issues in the patent medicine market.

At the time, there was no existing governing body overseeing the patent medicine industry, and the furore that arose over his exposure of corruption, deceit, and false advertising prompted the formation of the federal Pure Food and Drug Act in 1906. This led to products requiring they be properly labelled as to their ingredients. The Great American Fraud discusses quack medicine practices and the issues of medicines possibly harming instead of helping, though they were still allowed to make false claims as to efficacy.

Adams and his wife divorced in 1907. The same year he started to write fiction and co-authored, with Stewart Edward White, The Mystery. The Great American Fraud (1906) was followed by Flying Death (1908), another mystery novel, and his collection of detective stories Average Jones was published in 1911 to moderate success, mingling Adam's penchant for detail and scandal with witty cynicism in regard to institutions. The Secret of Lonesome Cove (1912) was followed by The Health Master (1913), wherein he makes use of his background of practical medical knowledge. The same year the American Medical Association made Adams an associate fellow. The Clarion (1914) was controversial in its criticism of advertising tactics in the newspaper industry. During World War I Adams served with the Committee on Public Information, on which he based Common Cause (1919), another newspaper theme. Little Miss Grouch (1915) was followed by The Unspeakable Perk (1916) and a short story collection Our Square and the People in It (1917). Adams married actress Jane Peyton (Jennie Van Norman) in 1915.

In the 20s Adams launched into a prolific period of writing fiction, including hundreds of short stories. Success (1921) was followed by his collection of short stories set in New York City, From a Bench in Our Square (1922). His Jazz Age Flaming Youth (1923) was published under his pseudonym Warner Fabian. Siege (1924) and The Piper's Fee (1926) were followed by Revelry (1926) which is based on President Warren G. Harding's scandal-rocked administration, suitably of the muckraking genre. Who and What: A Book of Clues for the Clever (1927), Unforbidden Fruit (1928), and The Flagrant Years (1929) were followed by his Daniel Webster biography, The Godlike Daniel (1929).

Adam's short story Night Bus inspired a number of screen adaptations including "It Happened One Night". Other titles published in the 30's were The Men in Her Life (1930) and Week-End Girl (1932), followed by his biography on Peggy O'Neale Eaton, The Gorgeous Hussy (1934). Widow's Oats (1935), Maiden Effort (1937), The World Goes Smash (1938), and Both over Twenty-One (1939) were titles to follow. The ironically titled The Incredible Era: The Life and Times of Warren G. Harding (1939), covering the Teapot Dome scandals, failed to gather much attention.

In the 40s Adams published a few novels anonymously, a romance titled The Book of Ariel and Tambay Gold, both in 1942, and a collaboration adding his medical knowledge with Frank G. Slaughter, That None Should Die (1941) and Spencer Brade, M.D. (1942). He also produced a number of upstate New York-based stories including New York, Canal Town (1944) and Sunrise to Sunset (1950) which were highly praised and widely read. He penned another biography, this time on A. Wolcott, His Life and World (1945).

During the last decade of his life, Adams was still writing full-force, including a memoir titled Grandfather Stories (1955). General Brock and Niagara Falls (1957) was followed by Chingo Smith of the Erie Canal (1958). Samuel Hopkins Adams died on 16 November 1958 at his Beaufort, South Carolina home. The New York Times and New York Herald Tribune published obituaries on 17 November 1958. Tenderloin (1959) was published posthumously and adapted to the stage.

Has anyone here read Samuel Hopkins Adams novel Reveille? It is a fictionalized account of the Warren G. Harding scandals and was written in 1926, three years after Harding's death. I read it years ago and enjoyed it as political satire. Rather like Primary Colors during the Clinton years. OswaldTheOsprey... 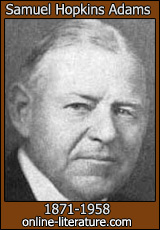 Here is where you find links to related content on this site or other sites, possibly including full books or essays about Samuel Hopkins Adams written by other authors featured on this site.