When I say I am called Valmont, the name will convey no impression to the reader, one way or another. My occupation is that of private detective in London, but if you ask any policeman in Paris who Valmont was he will likely be able to tell you, unless he is a recent recruit. If you ask him where Valmont is now, he may not know, yet I have a good deal to do with the Parisian police.--Chapter 1, "The Mystery of the Five Hundred Diamonds"

Robert Barr was born on 16 September, 1849, in Barony Glasgow, Scotland, the son of Robert Barr, carpenter, and Jane nee Watson. The Barr family emigrated to Upper Canada in 1854 and settled on a farm in Muirkirk, Ontario.

Barr went to school in Dunwich township and taught in Kent county. As a teenager he would go to the town of St. Thomas in anticipation of the Irish Fenian Raids, which he wrote of in In the Midst of Alarms (1893). In 1873 he entered the Toronto Normal School to obtain a teaching certificate, which would later inspire his The Measure of the Rule (1907), which contained veiled criticism for the standards of education at the time and the harsh discipline enacted on students. In 1874 Barr became the Principal for Windsor Ontario' Central School.

In the 1870's Barr started to write under his pseudonym Luke Sharp. He had had a lot of practice entertaining his younger siblings with his stories. He contributed to the satirical Grip magazine of Toronto. In 1876 the Detroit Free Press hired him as reporter and he moved to the United States. His brothers James and John would eventually write for the paper also. This same year, on 1 August, 1876, he married Eva Bennett, the daughter of a school trustee. They lived in Raleigh township, Ontario, and had a daughter named Laura. In 1881 Barr moved to England where he would remain until his death, to organise a weekly British edition of the Free Press.

In 1892 the ever-social and gregarious Barr and his friend Jerome K. Jerome, humourist, playwright and author of Three Men In A Boat founded the Idler in London. It was a satiric glossy gentleman's monthly with contributions from only the best mordant wits of the day including Sir Arthur Conan Doyle, Rudyard Kipling and Robert Barr himself. It also contained theater reviews, sporting reports, short stories, illustrations and generally content pandering to the idle making, but not lazy, character. One can almost hear the boys guffawing in the back room as the organ goes to print. At six pence, the first issue contained such gems as Detective Stories Gone Wrong - The Adventures Of Sherlaw Kombs by Luke Sharp, Enchanted Cigarettes and a new story by Mark Twain. Of one of their regular writers, W. W. Jacobs, Jerome K. Jerome wrote: "Often he will spend… an entire morning constructing a single sentence," . . . "If he writes a four thousand word story in a month, he feels he has earned a holiday; and the reason that he does not always take it is that he is generally too tired." In a brilliant example of his style of anecdotal farce, the February 1892 issue of the Idler published a hilarious interview of Mark Twain by Luke Sharpe. The Idler ceased publication in March 1911.

Barr would accompany his long-time friend Sir Arthur Conan Doyle in 1894 when he gave a lecture tour of Canada and the United States of which Barr had helped arrange. They had an infamous quarrel at Niagara Falls over Sherlock Holmes's death at Reichenbach Falls. Barr wrote a parody of this incident in 'Sherlaw Kombs' The Great Pegram Mystery (1894).

Often with an ironic twist or colourful narration, Barr was an accomplished short story writer, one collection being Revenge! (1896) He had an exceptional sense for the popular topics of the day and applied his characteristic swagger to narration ranging from romantic-adventure to detective thriller. He was well-travelled and well-liked. Ever the raconteur Barr was acquainted with many other respected writers of the time including Horatio Gilbert Parker and Joseph Conrad. In 1899 Barr wrote of Canada's preference for whiskey than books in the amusing two-part Literature in Canada which was really more of a gentle chastisement to Canadians to give more appreciation to their own home-grown writers. He received an honorary degree from the University of Michigan in 1900 for his accomplishments and skill in writing.

The Triumphs of Eugene Valmont is a collection of the stories and exploits of French detective turned rogue Eugene Valmont including parody of Sherlock Holmes. Barr set the standard for the genre with an even mix of light-hearted sardonics and cunning sleuth. Barr also added his own flair of commentary on the then standard English values. The dashing Valmont takes on dastardly English noblemen, jewel thieves and con-men. He's sophisticated and confident in his own abilities but not without an amount of self-effacing humour. Robert Barr died 22 October, 1912 in Woldingham, England.

Other works by Robert Barr include:

Hi, I have recently come across a copy of Robert Barr's Tekla, A Romance of Love and War, 1898, F.A. Stokes Publisher, however I found located in the book a photo in a plastic baggie marked "Tekla Kirten', 1000 W. 4th St. The photo appears to very old. I tried doing a search on this name but everything came up in a foreign language. I was hoping someone might be able to assist me any info on the real Countess Tekla, or perhaphs this Tekla Kirten may have owned the book. any help is so greatly appreciated.Thanks, I have included a few links to photos. http://www.geocities.com/dobima/teklabook4h.jpg http://www.geocities.com/dobima/teklabook5h.jpg http://www.ge...

hi everybody, I'm currently writing an essay on the author Robert Barr but have difficulties finding information. The best biography I have found this far is on this very site and I saw that it was written by C.D. Merriman, does anyone know how I can come in contact with him/her or know about other websites or books that might contain information on Barr? //Lassie...

how to find information; Robert Barr

hi, I'm trying to find more info about Robert Barr but I have as yet not been able to find much on the internet. Does anyone have any good tips for finding valuable info on a specific author on the net. Know any good webpages? also, if anyone happens to know anything about a biography or essays on Barr, I would be etarnally thankful if you let me know. Olivia... 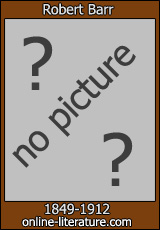 Here is where you find links to related content on this site or other sites, possibly including full books or essays about Robert Barr written by other authors featured on this site.