Friend Al: Just a line to let you know I am still on earth. My arm feels pretty good again and I guess maybe I will work in Detroit. Violet writes that she can't hardly wait to see me. Looks like I got a regular girl now Al. We go up there the twenty-ninth and maybe I won't be glad to see her. I hope she will be out to the game the day I pitch. I will pitch the way I want to next time and them Tigers won't have such a picnic.

I suppose you seen what the Chicago reporters said about that game. I will punch a couple of their jaws when I see them.

Lardner's short stories about Jack Keefe, a bush-league baseball player, were first published in the Saturday Evening Post; many were later collected under such titles as The Real Dope (1919) and Treat 'Em Rough: Letters from Jack the Kaiser Killer (1918) in which Keefe is serving in Germany during World War I; "I am out of baseball now and in the big game...." During his short but highly successful career as writer Lardner enjoyed great popularity among his readership who came to love his satirical and effective use of vernacular slang, replete with typos, grammatical errors, and run-on sentences. Lardner began his career reporting on sports events, then went on to primarily write for the Chicago White Sox baseball club for various newspapers. After the scandal of the World Series in 1919 Lardner became disenchanted with the league and his writing took on a more jaded tone. Included among his more famous stories are "Golden Honeymoon", "Haircut", "Alibi Ike", "Some Like Them Cold", and "A Day in the Life of Conrad Green". Sometimes compared to Mark Twain, and lauded by such fellow authors as Ernest Hemingway, H. L. Mencken and Virginia Woolf, Lardner also wrote on everyday events and topics, always with his unique blend of cynicism, sardonic wit, and warmth, endearing him to readers across the country and around the world.

Ringgold Wilmer Lardner was born on 6 March 1855 in Niles, Michigan, the youngest of nine children born to well-to-do parents Lena (1843-1919) and Henry Lardner (1839-1914). Lardner studied engineering at the Armour Institute of Technology in Chicago but did not complete his first semester. It was not until 1907 that he obtained his first job as journalist with the South Bend Times. He then went on to work with the Chicago Tribune eventually writing his column "In the Wake of the News". He also wrote the column "Pullman Pastimes" and edited the St. Louis Sporting News and the Boston American.

In 1911 Lardner married Ellis Abbott, with whom he would have four sons; John, James, Ring Jr., and David. All of them became successful writers including Ring Jr. (1915-2000) who won Academy Awards for his screen writing on such television series as M*A*S*H and The Cincinnati Kid. During World War I Lardner travelled to France to report for Collier's magazine; My Four Weeks In France was published in 1918. After Lardner's Gullible's Travels (1917) was published, the Lardners moved to Great Neck, Long Island in New York. It was here that Ring penned his syndicated columns between heady days and nights of boozing and partying with socialites and the much younger fellow Jazz Age author F. Scott Fitzgerald. This same year Own Your Own Home (1919) appeared, followed by The Young Immigrunts (1920), The Big Town (1921), How to Write Short Stories (With Samples) (1924), The Love Nest and Other Stories (1926), The Story of a Wonder Man (1926), and Round Up (1929). Along with baseball, Lardner had a great love of the theatre. He wrote a number of plays but his only successful one was a collaboration with George S. Kaufman (1889-1961) on the Broadway comedy June Moon (1929).

For many years Ring Lardner battled alcoholism and, at the age of forty-eight, died from a heart attack on 27 September 1933 in East Hampton, Long Island. He now rests in the Fresh Pond Crematory and Columbarium in Middle Village, Queens County, New York, United States of America.

I would write something prefatory to the other stories in this volume if I could find out from anybody what they are about. But it seems impossible. I just asked the madam, I said, "Do you remember the other stories in this book?" and I read her the titles and she said yes. "Well, then," I said, "tell me what they're about." "About!" she drooped. "I didn't think they were about anything. R. W. L. March, 1925."--from the Preface to Gullible's Travels

Anybody ever read this? Told in first person it is masterfully funny. You end up laughing at the narrator who would have no idea why anybody would laugh at him. And yet you sympathize too. I just finished it and I recommend it if you're looking for a different kind of short story. Plus, it just seemed to me that somebody should post something under Ring Lardner.... 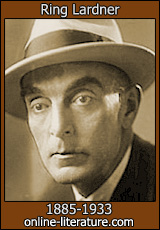 Here is where you find links to related content on this site or other sites, possibly including full books or essays about Ring Lardner written by other authors featured on this site.