Rex Ellingwood Beach was born on 1 September 1877 in Atwood, Michigan, the son of Henry Walter Beach, fruit farmer, and Eva Eunice Canfield, a former school teacher. The Beach family moved south to the state of Florida when Rex was seven. The tall and slim Beach attended Rollins College in Winter Park, Florida from 1891 to 1896 focusing on science, athletics, and editing the school's literary magazine. Though he wouldn't finish his degree at the time, in 1927 he returned to the College and was awarded an honorary degree of Doctor of Literature and his B.S. He was president of the Rollins Alumni Association from 1927 to 1940.

After leaving Rollins Beach went on to the Chicago College of Law, then Kent College of Law while assisting in his brother's Chicago-based law firm. He had his sights set on passing the bar exams when he was hit with Gold Rush Fever like thousands of others, and eagerly made his way to Alaska. For a period of five years he made several trips between Alaska and Chicago, though he never struck gold in the North Country. He did however find a wealth of adventure and excitement in the frontier towns and vast unexplored lands. He became acquainted with many of the steadfast and hearty men and women who were also chasing their dreams under such harsh circumstances. The greed, corruption, villains and heroes inspired him to turn his efforts to writing essays and short-stories including The Mule Driver and the Garrulous Mute which was published in McClure's Magazine. His collection of short stories, Pardners was published in 1904.

First serialized in Everybody's Magazine in 1905, Beach's Gold Rush-based The Spoilers was published in 1906 at the encouragement of his McClure's publisher. It became a best seller and inspired five different movie versions, the first one being a silent one in 1914 which was one of the first feature-length films to be made. Gary Cooper starred in the 1930 version, and the one in 1942, which is the most popular, stars Marlene Dietrich and John Wayne.

The couple eventually settled in Sebring, Florida, where Beach turned to agricultural pursuits in his latter years, including growing different types of bulbs while continuing to write but not as prolifically. He had suffered many physical ailments for years, culminating in his need for a breathing tube in his neck, and one in his stomach for eating. He was also losing his sight and never got over the grief of his wife's death in 1947. Rex Ellingwood Beach died of a self-inflicted gunshot wound on 7 December 1949. He and his wife's ashes were mingled and are interred at the Rollins College campus near the Alumni House, marked by a marble slab. Woman in Ambush was published posthumously in 1951.

All of Beach's books and his original manuscripts and correspondence are located at Rollins College, which also contains photographs and memorabilia of the late author. 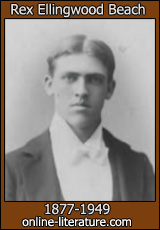 Here is where you find links to related content on this site or other sites, possibly including full books or essays about Rex Ellingwood Beach written by other authors featured on this site.