With his elder brother Henry (1824–1875), Blackmore spent much of his childhood in the lush and pastoral "Doone Country" of Exmoor, Devon, England, and along the Badgworthy Water (where there is now a memorial stone in Blackmore's honour) and among the future fictional Doone Valley's towering hills. The severe and remote rocky areas of Devon provided protection for many fugitives at the time where justice was swift and penalties harsh. Blackmore would hear of many tales of highway robbery and murder among illiterate half-wild men living on the edge of survival.

Richard Doddridge Blackmore was born 7 June 1825 at the vicarage in Longworth, Berkshire County, England, son of the Reverend John Blackmore (1794–1858). His mother, Anne Basset Knight (1794–1825) died of typhus when Richard was a mere three months old and so he was raised by his aunt Mary Francis Knight. They lived on the rugged and remote North Shore of the Bristol Channel near Glamorgan though young Richard travelled south often to visit his father and paternal grandfather in Devon. By 1832 he was living with his father again after he had married his second wife, Charlotte Ann Platt in 1831.

He started his education at Squire’s Grammar School in South Molton, Devon, then went on to the same school his father had attended, Blundell's School, during which he lived in the village for the week and would go home on Sundays. One of the boys he lodged with would later become archbishop of Canterbury. In the harsh and narrow circumstances he experienced the severe discipline and corporal punishment that some say later led to his epilepsy, though Blackmore does not make Blundell's out to be so monstrous in Lorna Doone. The grammar school gave him a solid background for his career as a man of letters and he won a scholarship for Exeter College, Oxford, earning a degree in the Classics in 1847. He became a Barrister of the Middle Temple in 1852 but never practiced due to his epilepsy.

Without his father's knowledge, R.D. Blackmore married Lucy Maguire (1822?–1888), daughter of a laundress and a Roman Catholic, on 8 November 1853 at Holy Trinity Church, London. Lucy would later become a member of the Church of England. They would not have their own children but did adopt Eva, a niece of Lucy's. The Classics Master taught Latin and Greek at Wellesley House grammar school for a time, before, owing to an inheritance left him by his uncle the Rev. H.H. Knight of Neath in 1860, he and Lucy moved to rural Teddington, built "Gomer House" named after his beloved dog and planted an orchard.

Never losing touch of his classicist education, he became an avid horticulturist and farmer of apples and pears while working on translations of Horace and Virgil. He wrote essays, articles and stories on the subject of fruit growing. One in particular, The farm and fruit of old: a translation in verse of the first and second georgics of Virgil, by a market gardener (1862) would prove to be a significant step in his becoming an author of fiction. From 1883 he was a member of the Royal Horticultural Society. Blackmore published many of his first works of verse under the pseudonym Melanter (Greek for ‘more black’) including Poems by Melanter (1853), Epullia (1855), and The Bugle of the Black Sea (1855), about the Crimean War. His first novel, with poetic imagery and autobiographical narrative was Clara Vaughan (1864), which was followed by Cradock Nowell (1866), first serialised in Macmillan's Magazine.

His fruit business never really a success, Blackmore finally earned some acclaim for his historical romance that blends fact and fiction, Lorna Doone. It is set in 17th century Exmoor during the reign of Britain's Charles II. Young farmer John Ridd vows revenge on the Doone clan, "the awe of all Devon and Somerset, outlaws, traitors, murderers", who killed his father when he was a child. The Doones are based on the real Doone family of Scotland who had been disinherited by the Stuarts for a time. The chivalrous Ridd unexpectedly falls in love with and sets out to rescue the tragically fated heroine Lorna from her terrorising family. Blackmore masters the dialect of his characters and masterfully paints an endearing and enduring depiction of his favourite county, Devon. It is a classic tale complete with love, murder, revenge, and a cliff-hanger ending. There were a number of movie and television versions produced.

In 1875, Henry John Turberville, Blackmore's brother died, apparently of cyanide poisoning. Blackmore published a number of books in the 1870s including The Maid of Sker (1872), Alice Lorraine (1875), Cripps the Carrier (1876), and Erema, set in California. Blackmore's novels resonate with historical relevance and sympathetic observation of Nature, surely inspired by nostalgia of his youthful days exposed to Her harsh extremes and his life as rural farmer. Plagued by ill health for many years, in January 1888 Lucy Blackmore died. Thereinafter Blackmore's nieces Eva and Adalgisa would live with and care for him. The same year Lucy died he started Kit and Kitty: a Story of West Middlesex (1890) which would bear the mark of his grief. Mary Anerley (1880), Christowell (1882) and his Naval tale based on the Napoleonic wars, Springhaven (1887) followed.

Blackmore was a rather jolly looking fellow with a bald pate, sporting a great flowing white beard. It is said he was prone to moodiness though his friends and correspondents were many including Thomas Hardy and others in America. Richard Doddridge Blackmore died on 20 January 1900. He is buried in Teddington Cemetery alongside Lucy. From his Memorial tablet at Exeter Cathedral: "He added Christian courtesy, and the humility of all thoughtful minds, to a certain and grand glorious gift of radiating humanity." 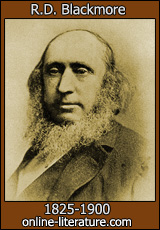 Here is where you find links to related content on this site or other sites, possibly including full books or essays about R.D. Blackmore written by other authors featured on this site.