G. Harvey Ralphson (1879-1940), American Boy Scouts Master and author of the Boy Scouts series, including Boy Scouts in Mexico, or On Guard with Uncle Sam (1911);

"This book is dedicated to the Boys and Girls of America, in the fond hope that herein they will find pleasure, instruction and inspiration; that they may increase and grow in usefulness, self-reliance, patriotism and unselfishness, and ever become fonder and fonder of their country and its institutions, of Nature and her ways, is the cherished hope and wish of the author."--G. Harvey Ralphson, Scout Master

Producing a number of adventure stories for boys during his career, George Harvey Ralphson created suspenseful plots in a variety of American regional and exotic locations. His characters embody the Boy Scout spirit and their slogan "Do a Good Turn Daily". The Boy Scouts of America was founded in 1910 by William D. Boyce, after meeting the British General Lord Robert Baden Powell in London, England who had founded the Scouts in Great Britain. On the eve of World War I Ralphson's patriotic stories brought inspiration to young men all over North America and Europe.

The bio for Ralphson says; G. Harvey Ralphson (1879-1940), American Boy Scouts Master and author of the Boy Scouts series, including Boy Scouts in Mexico, or On Guard with Uncle Sam (1911); And then proceeds to talk about William D. Boyce and the Boy Scouts of America. The American Boy Scouts were a very different, and competing organization, than the Boy Scouts of America. ABS was founded by William Randolph Hearst, (who dropped out very quickly, over disgust with their fund raising methods). The primary point of contention between the two organizations was over military training. The ABS saw itself as training future soldiers - military drill and weapons training w... 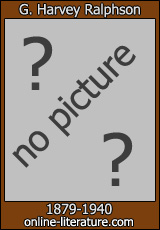 Here is where you find links to related content on this site or other sites, possibly including full books or essays about G. Harvey Ralphson written by other authors featured on this site.