Ralph Connor (pseudonym of Reverend Charles William Gordon) (1860-1937), Canadian Literature icon, Presbyterian minister, and one of the founders of the United Church of Canada wrote The Man From Glengarry;

"Three cheers for Macdonald!" cried Starry Hamilton, as the carriage drove away, and after the three cheers and the tiger, little Merrill's voice led them in the old battle-cry, heard long ago on the river, but afterward on many a hard-fought foot-ball field, "Glengarry forever!"--Ch. 25

Charles William Gordon was born at Indian Lands, Glengarry County, Canada West, on 13 September, 1860, the fourth son of Mary Robertson and the Rev. Donald (Daniel) Gordon. Donald was a missionary with the Free Church of Scotland in Canada in 1853. Gordon would embrace the values and morals of his parents which he based his life's work on.

Gordon graduated from the University of Toronto in 1883, then went on to New College, University of Edinburgh and finished his theological study at Knox College in Toronto. Gordon became an ordained minister in 1890. He spent a number of years as missionary in the Western Canadian frontier, including the prairies and Alberta, during a time of massive economic expansion and migration. (His pseudonym was intended to show his support and enthusiasm for these Home Missions. He asked his editor at the time to sign a story as "Cannor", an abbreviation of "Canadian Northwest". A telegraph operator misspelled it as "Connor", and that's what his editor used.)

These years among pioneering Canadians were to provide the inspiration for Gordon's series of short stories that he published in church newsletters to raise funds for church-awareness related missions. The Sky Pilot, (1899) The Prospector, (1904) The Foreigner and A Tale of Saskatchewan (1909) were all best-sellers. Of his twenty-six novels, Black Rock, (1897), The Sky Pilot and The Man from Glengarry sold over 5 million copies combined. Many of his other works resulted from the stories told to him by his parents, and his own youthful experiences, including the Glengarry stories. His work is admired and studied today because it provides succinct illustration of the middle-class of Anglophone Canada of the time.

In 1899, Gordon married Helen Skinner King, daughter of the Rev. John Mark King. Their son John King was born in 1900 and the Gordon's also had six daughters. (Their matrimonial home, at 54 West Gate, Winnipeg, Manitoba, on the Assiniboine river, was deemed a Historic House by the Winnipeg Historical Buildings Committee.) Among the next books of Gordon's to be published were The Doctor, (1906) Corporal Cameron of the Northwest Mounted Police, (1912) The Patrol of the Sundance Trail, (1913)The Major (1917) and To Him That Hath. (1921)

One of Gordon's' greatest influences was his mentor and best friend, Dr. James Robertson, Presbyterian superintendent of western Canadian missions, whom he memorialised in The Superintendent. (1906) Gordon wrote his biography, The Life of James Robertson in 1908.

In 1915, at the age of 54, a staunch patriot and imperialist, Gordon became the senior Protestant chaplain to the 43rd Battalion of the Cameron Highlanders during WWI in England and France. After his service, his views much altered by the experience and having witnessed the deaths of a number of his friends, his stories took on a wider scope and setting; theology versus modern society; the good and brave pioneering spirit versus evil, Christianity triumphing in the end. In 1916 he was recalled to Canada to embark on a lecturing tour of the United States in support of the Allied cause.

In 1922 Gordon became Moderator of the General Assembly of the Presbyterian Church and participated in a speaking tour for the unification of the Presbyterian, Congregational, and Methodist Churches. These long sometimes bitter years were eased by his writing retreats to his family cottage at Brikencraig, Lake of the Woods. Times were changing and Gordon's work reflected this, switching from romantic fiction to articles on the current social and economic climate of the 1930's.

In 1937, at the age of 77, Charles William Gordon was admitted to Misericordia Hospital in Winnipeg for an intestinal operation, after a year of illness. He died on 31 October, 1937. His autobiography was published as Postscript to Adventure: The Autobiography of Ralph Connor in 1938.

In 1976, Charles William Gordon, (Ralph Connor) was recognized as a Person of National Historic Significance by Heritage Canada. In 1983, Ralph Connor House was designated an Historic House by the Winnipeg Historical Buildings Committee. Gordon's personal collection of papers is preserved at the University of Manitoba's Library and Archives. Jack London said: "It's hard to believe the impact this man had at one point." 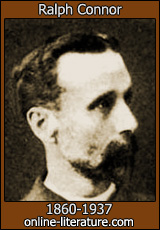 Here is where you find links to related content on this site or other sites, possibly including full books or essays about Ralph Connor written by other authors featured on this site.