Anthony Quiller Couch (1863-1944), [pseudonym "Q"], English author, poet, anthologist, and literary critic. He wrote many popular novels and essays and was a noted lecturer at Cambridge University. His legacy lives on in the grammar school system of Cornwall. With his vast number of short stories, Q shows his dynamic range of style and creativity with tales of the supernatural, Viking tales, satires, historical fiction, romantic adventures, tales of heroic swashbuckling, mystery and crime fiction, and sea-going adventures.

Sir Arthur Quiller Couch was born 21 November 1863 at Bodmin in county Cornwall in the southwest of England. His father, Thomas Quiller Couch, a Cornish physician, his mother Mary from Devon. His sisters Florence Mabel and Lilian would also become writers.

He attended Newton Abbot College in Devon, then Clifton College before entering Trinity College, Oxford in 1882. While there he contributed to the Oxford Magazine and wrote his adventure romance Dead Mans Rock (Cassell, 1887) under his "Q" pseudonym. The same year he moved to London. The Astonishing History Of Troy Town (1888), and The Splendid Spur (1889) followed. The same year, on 22 August 1889, he married Louisa Amelia, with whom he would have two children. Like his father, his son Bevil would attend Oxford before joining up as special reservist, artillery officer, during World War I. He died in Germany during the great flu epidemic of 1919. His daughter Foy would become friends with Daphne Du Maurier, who would posthumously finish and publish Q's Castle D'Or, a tale where the legendary Tristan and Iseult are transplanted to Cornwall in a spellbinding love story.

While in London Q took up journalism and was assistant editor to Cassell publishing's Liberal weekly The Speaker. In 1891, on the advice of his doctor due to illness, he and Louisa settled at their home, `The Haven', beside the sea at Fowey in Cornwall. His love of rowing and yachting led to his being appointed Commodore of the Royal Fowey Yacht Club in 1911 until his death. He was the Mayor of Fowey 1937-38. His collection of short stories, I Saw Three Ships & Other Winter's Tales was published first in 1892. His Cornish The Delectable Duchy: Stories, Studies, and Sketches (1893) is a series of historical fictional sketches.

Perhaps his most famous ghost (short) story, The Roll-Call of the Reef was published in 1895, The Blue Pavilions in 1891. In 1895 Q published an anthology on 16th and 17th-century English lyrists, The Golden Pomp. Wandering Heath: Stories, Studies & Sketches (1896) contains one of his more famous stories, the Napoleonic ghost story Roll-Call of the Reef. He would later finish Robert Louis Stevenson's St. Ives: being the adventures of a French prisoner in England (1898). Hetty Wesley (1903), Fort Amity (1904), Shakespeare's Christmas and Other Stories (1904), The Shining Ferry (1905), and Sir John Constantine (1906) were some of his many titles to follow. His The Sleeping Beauty and other Fairy Tales (1910) is his re-telling of Sleeping Beauty, Blue Beard, Cinderella, and Beauty and the Beast, one of the morals from it;

Many shy, unhappy creatures
From the covert watch your mirth:
Foul are we, they mourn; our features
Blot the sun, deform the earth.
Pity, love them, speak them fair:
Half their woe ye may repair.
(Beauty and the Beast)

".. a liberal education is not an appendage to be purchased by a few: that Humanism is, rather, a quality which can, and should, condition all our teaching; which can, and should, be impressed as a character upon it all, from a poor childs first lesson in reading up to a tutors last word to his pupil on the eve of a Tripos."
Arthur Quiller Couch, 7 July 1912.

In 1912 until his death he was appointed professor of English literature at Cambridge University and also fellow of English at Jesus College, Cambridge. Q would publish many of the lectures he delivered to his students that were extremely popular, including On the Art of Writing (1916) and On the Art of Reading (1920). From his Preface of his lectures: "Literature is not a mere Science, to be studied; but an Art, to be practised."

On 12 May 1944, Sir Arthur Quiller Couch died at his home in Fowey, and was laid to rest in the Saint Nicholas Churchyard in Fowey, Cornwall, England. Memories and Opinions, Q's unfinished autobiography at his death, was published in 1945. Q's friend Helene Hanff wrote Q's Legacy (1986) which would later be adapted to the stage and film. 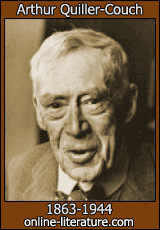 Here is where you find links to related content on this site or other sites, possibly including full books or essays about Arthur Quiller-Couch written by other authors featured on this site.