Plato (427-347 BC), Greek philosopher, student and friend of Socrates, and author of The Republic; "Then, I said, let us begin and create in idea a State; and yet the true creator is necessity, who is the mother of our invention."

Plato had a profound influence on Western political and scientific thought, for as Alfred North Whitehead said, "All western philosophy consists of footnotes to Plato." His works cover various subjects like education, ethics, epistemology, mathematics, metaphysics, natural science, politics, and philosophy. Included among them are Laws; "I can show you that the art of calculation has to do with odd and even numbers in their numerical relations to themselves and to each other.", Parmenides; "You cannot conceive the many without the one." and The Republic; "The knowledge of which geometry aims is the knowledge of the eternal.", ultimately discussing man's relationship with his soul, the state, and the universe.

Although many of his ideas and theories are controversial, "Plato is philosophy, and philosophy, Plato, at once the glory and the shame of mankind, since neither Saxon nor Roman have availed to add any idea to his categories."--Ralph Waldo Emerson `Plato, or The Philosopher', he is also well known and respected as being a faithful disciple of Socrates and being the primary source of information on the man, his life and ideas. A number of Plato's works contain the conversations he purportedly heard between his teacher and others; his philosophy, the charges of his impiety, ensuing trial and his last days in the Socratic Dialogues including Apology;

"The hour of departure has arrived, and we go our ways--I to die, and you to live. Which is better God only knows."--Socrates before he drinks the cup of poison hemlock.

Plato was born into an aristocratic family in Athens, Greece around 427 BC, the son of Ariston and his wife Perictione. It is said that `Plato' is a nickname in reference to his wrestler's broad shouldered physique. Athens was in conflict with Sparta during the Peloponnesian War at the time, and Plato soon became disillusioned with the Empire and abandoned his political aspirations. Around the age of twenty he became a student of Socrates.

Devoting his life to seeking the truth and examining such issues as virtue and piety through the dialectic questioning of his pupils, Socrates was also critical of the religious and political institutions of the day. Soon he was charged with heresy and corrupting the youth of Athens, and thus began Plato's writing in earnest. Apology and Crito were among his Socratic works to follow. After his teacher's death, around the age of forty Plato founded the Academy, of which Aristotle was a pupil, in a grove sacred to the demigod Academus, near Athens. Astronomy, mathematics, and philosophy were among the subjects taught there. Apart from a few years spent travelling and studying in other parts of the Mediterranean, Plato spent the majority of his life in Athens until his death in 347 BC.

Plato further developed his ideas and theories in such works as Symposium; Phaedo--"False words are not only evil in themselves, but they infect the soul with evil."; and The Republic, including his Theory of Forms and various Platonisms. From The Republic we get his metaphor of the cave: prisoners are chained inside a cave, their only reality that which they see directly in front of them on the wall. Shadows of men, animals, and objects are cast on it because there is a fire behind them. The prisoners believe that the shadows are speaking and thus learn to `name' things and form their ideas of what is `real'. Now, take the prisoner from this cave, and he will be blinded by the light, and slowly learn that his reality is not quite what it seems. So suggests Plato in his Theory of Forms, that the words we use to `name' things are not truly representative of reality, that the universal is found separately from the tangible, for as Socrates said;

"it is the greatest good for a man to discuss virtue every day and those other things about which you hear me conversing and testing myself and others, for the unexamined life is not worth living."

Condemnation of poetry by plato

In his book, the republic, plato says that poetry is an imitation of imitation and thrice removed from reality.so he rejects poetry.do u agree with plato or not?give reasons as well....

Posted By NUMALIAN in Plato, || 2 Replies

Plato's argumentation against theatre and representation

Plato is known mostly for his excellent argumentations which of course were fought back from his own student Aristotle.However,Plato's opinion for the theatre and the representers is very strict and sometimes odd.Plato claimed that the theatre is the destraction of the mind as it occurs to the expression of the feelings ONLY,as he believed.Plato was also against poetry,his representation was psychological.He was very concerned about the perversive role the poetry had in education.How can the poet teach since he doesnt know the truth?Continuing to the theatre,he considered it as "hubris"-disrespect to Gods and immoral as it doesnt include truth but only aesthetic distance and so on only emoti...

So I’ve been reading about Plato’s philosophies lately. As part of our preparation for SAT exam, we are trying to better our reading skills (and become faster readers) through an extensive reading from both literature and philosophy. Since I feel better and much improved when I write about what I am reading, and since I have always understood things better when people have discussed about it in front of me, I am hereby starting a discussion here, not only on Plato and his philosophies, but also on what LitNetters have to say about his approaches to the solution of the problem of the universals. So please be kind and contribute! The problem with studying anything on Plato̵...

Posted By symphony in Plato, || 7 Replies

Family Structure in The Republic

Being a Christian, I naturally have some moral problems with Platos idea of communal wives and children (to say the least), but I also think that his scheme is faulty on logical grounds. The family unit is the building block of society. Think of the father as the president of the family unit, and the mother as the vice-president. This structured family system paves the way for the larger system of government. The headship of the father is reflected in every level of government  city, state, country. I dont believe Platos City, lacking this basic pattern of leadership, would hold together. You cant build a brick wall if you smash the bricks. I cou... 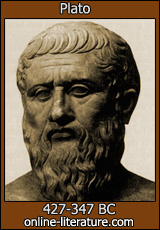 Here is where you find links to related content on this site or other sites, possibly including full books or essays about Plato written by other authors featured on this site.