Peter B. Kyne (1880-1957), American novelist and prolific short story writer and businessman at heart. He wrote about ranchers and loggers, businessmen and seamen, including the Cappy Ricks (1916) series and The Go-Getter (1922).

Peter Bernard Kyne was the son of a cattle rancher, John Kyne, and his wife Mary Cresham. He was born in San Francisco, California, on 12 October 1880. Young Peter's education started at a rural school. He went on to attend business school though early on he was given the advice to become a writer. At age fifteen he worked with his father on his ranch. He then went on to be a clerk in a store to earn his room and board and eventually got a sales position with a shipping company.

Though Kyne had bad eyesight and was underage at the time he wrangled his way into the army, serving with the Company L Fourteenth Infantry for the Spanish-American War and the Philippine Insurrection. He was also a captain in the 144th Field Artillery during World War I. His service would provide much fodder for his later novel, The Go-Getter. Upon discharge, Kyne wandered for the next few years between various jobs, mostly in sales. In 1905 he worked for a time as a reporter with the San Francisco Morning Call. Kyne became acquainted with life amongst the Embarcadero's piers and came to respect the life of the merchant mariners, which would also prove to be fertile ground for his future works.

Kyne married Helene Catherine Johnston on 2 February 1910. Around this time he had begun to get his short stories published, first in the esteemed Saturday Evening Post, then additionally in Cosmopolitan, American Magazine, Sunset, and Collier's. His first novel was released in 1913, The Three Godfathers, it being along the lines of the Three Wise Men parable, who adopt a foundling. It was a huge success and later a few film versions of it were made, Kyne assisting in the adaptations, one of them starring John Wayne. Kyne was a member of the exclusive Bohemian Club of San Francisco, which at the time was the headquarters for the prominent literary and artistic people of the city.

The best-selling Cappy Ricks was published in 1916. Cappy Ricks is a crusty yet soft-hearted Scots sea captain, a real go-getter, who owns the Dollar Steamship Lines. Cappy Ricks Retires (1922), Cappy Ricks Comes Back (1934), and Cappy Ricks Special (1935) were to follow. The Valley of the Giants (1918) (also made into movie a number of times), is about the legacy of John Cardigan. Kindred of the Dust (1920) was another highly acclaimed novel; a coming-of-age adventure romance about Scottish lumber company owner Hector McKaye and his son. The scenario was used to make a silent film in 1922. The Pride of Palomar (1921), dated now, is a book of the then current times set in early 1920s California, describing the brutal and discriminatory treatment of Japanese people and the fights over land ownership.

With over 500,000 copies sold worldwide now, William Randolph Hearst first publishing it in 1921, The Go Getter (1922) became somewhat of a `bible' for salesmen, entrepreneurs and employers. It is the story of a disabled man, veteran Bill Peck, fresh from World War I, overcoming seemingly insurmountable odds with his tenaciousness and wit. He finally proves his mettle and becomes a successful businessman with Cappy Rick and Rick's Logging & Lumbering Company. Another wealthy businessman theme, Never the Twain Shall Meet (1923) was made into a movie in 1925, and remade in 1931 starring Leslie Howard. Some of his titles to follow were Outlaws of Eden (1929), Golden Dawn (1930), a crime adventure romance with a Jekyll and Hyde theme, Soldiers, Sailors and Dogs (1936), and The Parson of Panamint and Other Stories (1936), stories of the California desert and Death Valley.

Kyne's stories inspired films, and he worked on a number of them including material for silent and `talkies' in the 1920s. In 1939 he was fined for income tax evasion. Though he still had a few stories published in magazines, his last novel published was Dude Woman (1940), with heroine Mary Sutherland; nimble on a horse and quick in business dealings. Kyne was a sometimes wealthy Republican, though he ended up squandering much of his wealth on poor investments in the oil industry, schemes of speculation and invention and horseracing. He died on 25 November 1957 and is buried at the Golden Gate National Cemetery, San Bruno, San Mateo County, California, USA.

Forum Discussions on Peter B. Kyne 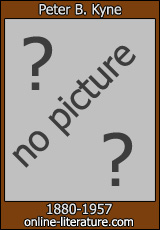 Fiction
Quizzes on Peter B. Kyne

Related links for Peter B. Kyne

Here is where you find links to related content on this site or other sites, possibly including full books or essays about Peter B. Kyne written by other authors featured on this site.