"Paris: September, 1792. A surging, seething, murmuring crowd of beings that are human only in name, for to the eye and ear they seem naught but savage creatures, animated by vile passions and by the lust of vengeance and of hate. The hour, some little time before sunset, and the place, the West Barricade, at the very spot where, a decade later, a proud tyrant raised an undying monument to the nation's glory and his own vanity."

Baroness Emma Magdalena Rosalia Maria Josefa Barbara Orczy was born on 23 September 1865 at the rambling family estate Tarna-Örs in Hungary, the second daughter of Baron Felix Orczy, composer and conductor, and his wife Emma. She led an idyllic childhood, climbing the acacia trees and enjoying the constant company of her extended family and friends coming to feast and dance traditional Hungarian csàrdàs.

After a peasant uprising on 22 July 1868, the Orczys moved to Budapest. Orczy then attended schools in Brussels and Paris studying the arts before the family moved to London. At the age of fifteen and just starting to learn english, she entered the West London School of Art, then Heatherley's, which started her lifetime love of painting and drawing. Some of her works were exhibited at the Royal Academy. Although shy and quiet, the young Baroness was maturing with aristocratic poise, dark haired with an intense gaze. There was constant socialising at the Orczy home with writers, members of the court and such noted musical composers as Franz Liszt. It was in the studio at Heatherley's that Orczy met fellow artist and future husband Henry Montague Barstow. They married in London in 1894 and would have one son.

"My marriage was for close on half a century one of perfect happiness and understanding, of perfect friendship and communion of thought. The great link in my chain of life which brought me everything that makes life worth the living."--from Chapter VIII, Links in the Chain of Life

Collaborating with her husband, Orczy produced and illustrated a translated version of Old Hungarian Fairy Tales (1895). She also starting writing and contributed many mystery stories for Royal Magazine and Cassell's. Her historical romance A Son of the People (1906) is based on events at Tarna-Örs. Lady Molly of Scotland Yard (1910) features the admirable heroine sleuth Lady Molly. Her play The Duke's Wager (1911) was followed by El Dorado (1913), The Laughing Cavalier (1914), Leatherface (1916), A Sheaf of Bluebells (1917), and Flower o' the Lily (1918).

After the Armistice of 1918 the Barstows bought Villa Bijou in Monte Carlo, Monaco, with its elaborate gardens and bracing climate. They would later buy a villa in Italy. A period of prolific writing for Orczy ensued, and the Barstows delighted in the culture and climate of Monte Carlo. They entertained many friends in their "Jewel" of a home. Avid gardeners, they were often seen side by side, whether in the gardens or the studio, he painting, she writing. Some of her works written during his time were His Majesty's Well Beloved (1919), The First Sir Percy (1921), Nicolette: A Tale of Old Provence (1922), and Pimpernel and Rosemary (1924), inspired by events surrounding the annexation of her mother's birthplace, Transylvania. Her last novel was Mam'zelle Guillotine (1940).

Orczy was also working on her autobiography for a number of years, Links in the Chain of Life (1947), which contains much reference to the climate during W.W.I and W.W.II in England, Hungary, Monaco and Italy. It also contains much detail of her own life; her travels, her loves, and her heartbreaks, the ultimate one being when her husband Henry Montague Barstow died in Monte Carlo in 1943. Stricken with grief "the light went out of my life. My darling passed away and I was left in darkness and alone." She had also lost her devoted maidservant whom she fought to have released after she was arrested by the Italians. Orczy returned to England and died in London on 12 November 1947. An obituary was published in The Times on 13 November 1947.

Though I actually liked the movie with Anthony Andrews and Jane Seymour more than the book (a first I think), the book was rather good. In a novel that I'm writing, I've adopted the name Dewhurst as tribute to Baroness Orczy. A good story Baroness. But, I think she could have stood to have learned the concept of the paragraph.... 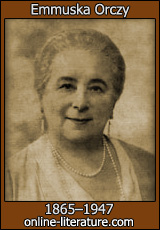 Here is where you find links to related content on this site or other sites, possibly including full books or essays about Baroness Emmuska Orczy written by other authors featured on this site.