A man of contrasts and contradictions, Holmes lived his life between the poetic and the realistic. A celebrated poet-doctor, he spent the greater part of his life as physician and professor at Harvard University teaching anatomy and physiology. He published many essays and journal articles on travel, epidemiology, psychology, and literature, and hundreds of short stories both humorous and critical. Along with his good friend James Russell Lowell, he was one of the founding editors of the journal Atlantic Monthly in 1857.

Oliver Wendell Holmes was the third and eldest son born into one of the old Boston Brahmin families on 29 August 1809 in Cambridge, Massachusetts, the same year Charles Darwin and Lord Alfred Tennyson were born. His father was Reverend Abiel Holmes, an orthodox Calvinist minister with the First Congregational Church, who was married to Sarah Wendell, descended from early Dutch settlers. The Holmes's resided in the "old Gambrel-roofed House" in the college dominated village, which Holmes later memorialised in The Autocrat of the Breakfast Table (1858) which remains one of his best collections.

His early days of strict Calvin upbringing would come into conflict with the Unitarian spirit of Harvard, which he graduated from in 1829. A number of his humorous poems had been published in Harvard's Collegian. The publication of his patriotic poem "Old Ironsides" (16 September 1830) in the Boston Daily Advertiser about the Navy frigate USS Constitution which was no longer fit for service, helped save it from being dismantled and earned him National praise. At this time he decided to study medicine instead of law, and set forth to Boston Medical College. He spent some time in the prestigious schools of Paris, then was back to Harvard, graduating MD in 1836.

Holmes soon became distinguished for his articles and essays written on such medical issues as treatment for malaria, though his passion for writing verse was expressed in his Poems (1836). Two years later Dartmouth College appointed him professor of anatomy, but he moved to Harvard to teach where he remained until his death in 1894. After touring on the lecture circuit giving talks on literature and science, he met and married the daughter of supreme court justice Charles Jackson, Amelia Lee Jackson (1818-1888) in 1840 with whom he'd have three children.

His namesake and son Oliver Wendell Holmes Jr. (1841-1935) fought in the Civil War, after which his father wrote "My Hunt after the Captain", published in the Atlantic Monthly in 1862. It was a retelling of his search for his son who had been wounded in the battle of Antietam. Accusing his father of being a dilettante and using his ordeal for literary gain, their relationship suffered much animosity. Oliver Wendell Holmes Jr. would go on to become known as the "Great Dissenter" after being appointed Juror in the United States Supreme Court in 1902 by President Theodore Roosevelt.

Holmes was lecturing five days a week and became well-known for captivating and engaging his audience. He also conducted a number of noteworthy studies including The Contagiousness of Puerperal Fever (1843) published in a number of journals including the Boston Medical and Surgical Journal and miscellanea in the North American Review. In 1850 he read his poem Astraea to the Phi Beta Kappa Society of Yale College. Originally serialised in the Atlantic Monthly his novel Elsie Venner: a Romance of Destiny (1861) did not meet favourable reviews. One of Holmes' self-professed "medicated novels" it explores themes of original sin and captures the spirit of small town America through the protagonist Elsie. Poisoned in the womb when her mother is bitten by a snake, she doubly instils awe and loathing.

Songs in Many Keys (1862) was another of his many volumes of poems. Soundings from the Atlantic, a book of essays, was published in 1864. The Guardian Angel (1867) serialised the previous year in the Atlantic Monthly is in a similar vein to Elsie, dealing with issues of moral responsibility and written from the approach of a physiologist, which his critics say weighed too heavily on the plot. Songs of Many Seasons (1875), The Iron Gate and Other Poems (1880), and Before the Curfew and Other Poems (1888) were some of his works to follow. Holmes also tried his hand at biography, including his memoir of a friend John Lothrop Motley (1879) and he was commissioned to write Ralph Waldo Emerson (1885) for the American Men of Letters series. A Mortal Antipathy (1885), another of his "medicated novels" deals with a man suffering "gynophobia".

In 1886 he and his daughter travelled to Europe, mostly in England, with a busy itinerary of socialising with various associates and friends. Holmes also received honorary doctorates from Oxford and Cambridge while there, and they travelled to a number of places Holmes had first experienced as a student. His memoir Our Hundred Days in Europe (1887) is a recounting of this happy trip. He was just finishing the editing on his The Writings of Oliver Wendell Holmes, Riverside Edition (13 vols., 1891-1892), when he died at home in Boston on 7 October, 1894. He lies buried at the Mount Auburn Cemetery in Cambridge, Middlesex County, Massachusetts.

"One's mind, once stretched by a new idea, never regains its original dimensions."

Pi K'ach'iu That Hungarian novel My motherland Next time again with you will say I will have to found a country tomorrow the fellow student association Also had to see the first love sweetheart A year only has time I was anticipating Speaks the Beijing Sina internet bar Its literature table of contents has a minute very many kind Novel Poetry Play Prose Writer Commentary History of literature Artistic thought The network serializes Common topic Too many Under compares Taiwan's entrance website appears not worthy of mentioning Takes the novel to say Also divides Famous work Classical novel Contemporary novel Network novel Republic... 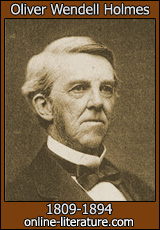 Here is where you find links to related content on this site or other sites, possibly including full books or essays about Oliver Wendell Holmes written by other authors featured on this site.