With a light touch of humour when dealing with morality and offering advice in her works, Reed realised the responsibility and opportunity she had as a writer to affect younger women's lives. Thomas Carlyle's Transcendental movement-inspiring novel Sartor Resartus was a favorite of hers, motivating her to add her own philosophy on life in her popular fiction works such as Old Rose and Silver (1909) and Master of the Vineyard (1910) and The Spinster Book (1901);

The Lady of the Court was wont to send her knight into danger at her sweet, capricious will. Her glove upon his helmet, her scarf upon his arm, her colours on his shield—were they worth the risk of horse and spear? Yet the little that she gave him, made him invincible in the field.

To-day there is a subtle change. She is loved as dearly as was Guenevere, but she gives him neither scarf nor glove. Her love in his heart is truly his shield and his colours are the white of her soul. He needs no gage but her belief, and having that, it is a trust only a coward will betray. The battle is still to the strong, but just as surely her knight comes back with his shield untarnished, his colours unstained, and his heart aglow with love of her who gave him courage.

The centuries have brought new striving, which the Lady of the Court could never know. The daughter of to-day endeavours to be worthy of the knightly worship—to be royal in her heart and queenly in her giving; to be the exquisitely womanly woman he sees behind her faulty clay, so that if the veil of illusion he has woven around her should ever fall away, the reality might be even fairer than his dream.--The Spinster Book "The Philosophy of Love"

Myrtle Reed was the daughter of preacher Hiram Vaughn Reed and his wife Sophia Elizabeth Armstrong Reed (1842-1915), an author of theological works. Myrtle was born in Norwood Park, Illinois, on 27 September 1874. Young Myrtle was influenced early on by both parents to read and write.

After high school Reed put her efforts into writing poems and stories, her first published in The Acorn, a magazine catering to children. Soon after she was a regular contributor to such periodicals as Munsey's, Harper's Bazaar, Cosmopolitan, and National magazines.

Love Letters of a Musician (1899) was Reed's first novel, the first of many works to be well-received by the public. It was followed by Later Love Letters of a Musician (1900). The Spinster Book (1901) is a compilation of essays on matters of the heart. However, it was Lavender and Old Lace (1902), in a special lavender binding designed by Margaret Armstrong that finally established her as an author of romance, even inspiring a theatre production in 1938. President Theodore Roosevelt read Reed's The Book of Clever Beasts (1904) and wrote her a letter in praise of it. The Master's Violin (1904), At the Sign of the Jack o' Lantern (1905), and A Spinner in the Sun (1906) followed. Love Affairs of Literary Men (1907) included Jonathan Swift, Alexander Pope, Thomas Carlyle and Edgar Allan Poe.

In 1906 Reed and Canadian editor James Sydney McCullough married. As portrayed in her stories, Reed found much satisfaction in domestic matters, and her series of cookbooks under the pseudonym Olive Green are evidence of a happy home life and love of entertaining friends and family. What to Have for Breakfast (1905) was followed by One Thousand Simple Soups (1907). Interspersed with the recipes were humorous little sketches such as "The Kitchen Rubaiyat" and "The Philosophy of Breakfast". Everyday Desserts (1911) and the Myrtle Reed Cookbook (1916) were published posthumously.

A Weaver of Dreams (1911) was Reed's last book. After years in an unhappy marriage and suffering insomnia, she died of an overdose of her sleep medication on 17 August 1911 in Chicago, Illinois. Myrtle Reed is buried at Graceland Cemetery, Chicago, Cook County, Illinois.

Pathos is not sadness, but it is rather the sunshine gleaming through a passing cloud, and hence the writings of Myrtle Reed are illumined with the gladsome light of unfailing love. Not only in her books and in letters to troubled souls, but also in her personal records, we find the unfading lines of a deeply devotional nature which was sacredly guarded from the careless observer and seldom discussed even with friends. But in this abiding faith was rooted the brave loyalty and high purpose which not only characterised herself, but also all of her productions.--written by the mother of Myrtle, Elizabeth A. Reed, in the Preface to The White Shield 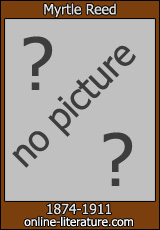 Here is where you find links to related content on this site or other sites, possibly including full books or essays about Myrtle Reed written by other authors featured on this site.