My first impulse was to hide myself in some obscure corner where I
could vent my feelings without fear or favour. I composed my face
as well as I could before leaving the 'phone booth; then I sidled
across the lobby and slipped out of the side door. I found my way
into the stable, where good old Peg was munching in her stall. The
fine, homely smell of horseflesh and long-worn harness leather went
right to my heart, and while Bock frisked at my knees I laid my head
on Peg's neck and cried. I think that fat old mare understood me.
She was as tubby and prosaic and middle-aged as I--but she loved the
Professor.

Suddenly Andrew's words echoed again in my mind. I had barely
heeded them before, in the great joy of my relief, but now their
significance came to me. "In jail." The Professor in jail! That was
the meaning of his strange disappearance at Woodbridge. That little
brute of a man Shirley must have telephoned from Redfield, and when
the Professor came to the Woodbridge bank to cash that check they
had arrested him. That was why they had shoved me into that mahogany
sitting-room. Andrew must be behind this. The besotted old fool! My
face burned with anger and humiliation.

I never knew before what it means to be really infuriated. I could
feel my brain tingle. The Professor in jail! The gallant, chivalrous
little man, penned up with hoboes and sneak thieves suspected of
being a crook... as if I couldn't take care of myself! What did they
think he was, anyway? A kidnapper?

Instantly I decided I would hurry back to Port Vigor without delay.
If Andrew had had the Professor locked up, it could only be on the
charge of defrauding me. Certainly it couldn't be for giving him a
bloody nose on the road from Shelby. And if I appeared to deny the
charge, surely they would have to let Mr. Mifflin go.

I believe I must have been talking to myself in Peg's stall--at
any rate, just at this moment the stableman appeared and looked
very bewildered when he saw me, with flushed face and in obvious
excitement, talking to the horse. I asked him when was the next
train to Port Vigor.

"Well, ma'am," he said, "they say that all the local trains is held
up till the wreck at Willdon's cleared away. This being Sunday, I
don't think you'll get anything from here until to-morrow morning."

I reflected. It wasn't so awfully far back to Port Vigor. A flivver
from the local garage could spin me back there in a couple of
hours at the most. But somehow it seemed more fitting to go to the
Professor's rescue in his own Parnassus, even if it would take
longer to get there. To tell the truth, while I was angry and
humiliated at the thought of his being put in jail by Andrew, I
couldn't help, deep down within me, being rather thankful. Suppose
he had been in the wreck? The Sage of Redfield had played the part
of Providence after all. And if I set out right away with Parnassus,
I could get to Port Vigor--well, by Monday morning anyway.

The good people of the Moose Hotel were genuinely surprised at
the hurry with which I dispatched my lunch. But I gave them no
explanations. Goodness knows, my head was full of other thoughts and
the apple sauce might have been asbestos. You know, a woman only
falls in love once in her life, and if it waits until she's darn
near forty--well, it _takes!_ You see I hadn't even been vaccinated
against it by girlish flirtations. I began to be a governess when
I was just a kid, and a governess doesn't get many chances to be
skittish. So now when it came, it hit me hard. That's when a woman
finds herself--when she's in love. I don't care if she _is_ old or
fat or homely or prosy. She feels that little flutter under her ribs
and she drops from the tree like a ripe plum. I didn't care if Roger
Mifflin and I were as odd a couple as old Dr. Johnson and his wife,
I only knew one thing: that when I saw that little red devil again I
was going to be all his--if he'd have me. That's why the old Moose
Hotel in Bath is always sacred to me. That's where I learned that
life still held something fresh for me--something better than baking
champlain biscuits for Andrew.

That Sunday was one of those mellow, golden days that we New
Englanders get in October. The year really begins in March, as
every farmer knows, and by the end of September or the beginning of
October the season has come to its perfect, ripened climax. There
are a few days when the world seems to hang still in a dreaming,
sweet hush, at the very fulness of the fruit before the decline
sets in. I have no words (like Andrew) to describe it, but every
autumn for years I have noticed it. I remember that sometimes at
the farm I used to lean over the wood pile for a moment just before
supper to watch those purple October sunsets. I would hear the sharp
ting of Andrew's little typewriter bell as he was working in his
study. And then I would try to swallow down within me the beauty
and wistfulness of it all, and run back to mash the potatoes.

Peg drew Parnassus along the backward road with a merry little
rumble. I think she knew we were going back to the Professor.
Bock careered mightily along the wayside. And I had much time for
thinking. On the whole, I was glad; for I had much to ponder. An
adventure that had started as a mere lark or whim had now become for
me the very gist of life itself. I was fanciful, I guess, and as
romantic as a young hen, but by the bones of George Eliot, I'm sorry
for the woman that never has a chance to be fanciful. Mifflin was
in jail; aye, but he might have been dead and--unrecognizable! My
heart refused to be altogether sad. I was on my way to deliver him
from durance vile. There seemed a kinship between the season and
myself, I mused, seeing the goldenrod turning bronze and droopy
along the way. Here was I, in the full fruition of womanhood, on the
verge of my decline into autumn, and lo! by the grace of God, I had
found my man, my master. He had touched me with his own fire and
courage. I didn't care what happened to Andrew, or to Sabine Farm,
or to anything else in the world. Here were my hearth and my
home--Parnassus, or wherever Roger should pitch his tent. I dreamed
of crossing the Brooklyn Bridge with him at dusk, watching the
skyscrapers etched against a burning sky. I believed in calling
things by their true names. Ink is ink, even if the bottle is marked
"commercial fluid." I didn't try to blink the fact that I was in
love. In fact, I gloried in it. As Parnassus rolled along the road,
and the scarlet maple leaves eddied gently down in the blue October
air, I made up a kind of chant which I called

O God, I thank Thee who sent this great adventure my way!
I am grateful to have come out of the barren land of
spinsterhood, seeing the glory of a love greater than myself.
I thank Thee for teaching me that mixing, and kneading, and
baking are not all that life holds for me. Even if he doesn't
love me, God, I shall always be his.

I was crooning some such babble as this to myself when, near
Woodbridge, I came upon a big, shiny motor car stranded by the
roadside. Several people, evidently intelligent and well-to-do,
sat under a tree while their chauffeur fussed with a tire. I was
so absorbed in my own thoughts that I think I should have gone
by without paying them much heed, but suddenly I remembered the
Professor's creed--to preach the gospel of books in and out of
season. Sunday or no Sunday, I thought I could best honour Mifflin
by acting on his own principle. I pulled up by the side of the road.

I noticed the people turn to one another in a kind of surprise, and
whisper something. There was an elderly man with a lean, hard-worked
face; a stout woman, evidently his wife; and two young girls and a
man in golfing clothes. Somehow the face of the older man seemed
familiar. I wondered whether he were some literary friend of
Andrew's whose photo I had seen.

Bock stood by the wheel with his long, curly tongue running in and
out over his teeth. I hesitated a moment, thinking just how to
phrase my attack, when the elderly gentleman called out:

I was beginning to realize that Mifflin was indeed a public character.

"Well, I should think so," he said. "Didn't he come to see me last
spring about an appropriation for school libraries, and wouldn't
leave till I'd promised to do what he wanted! He stayed the night
with us and we talked literature till four o'clock in the morning.
Where is he now? Have you taken over Parnassus?"

"Just at present," I said, "Mr. Mifflin is in the jail at Port Vigor."

The ladies gave little cries of astonishment, and the gentleman
himself (I had sized him up as a school commissioner or something
of that sort) seemed not less surprised.

"In jail!" he said. "What on earth for? Has he sandbagged somebody
for reading Nick Carter and Bertha M. Clay? That's about the only
crime he'd be likely to commit."

"He's supposed to have cozened me out of four hundred dollars," I
said, "and my brother has had him locked up. But as a matter of fact
he wouldn't swindle a hen out of a new-laid egg. I bought Parnassus
of my own free will. I'm on my way to Port Vigor now to get him out.
Then I'm going to ask him to marry me--if he will. It's not leap
year, either."

He looked at me, his thin, lined face working with friendliness. He
was a fine-looking man--short, gray hair brushed away from a broad,
brown forehead. I noticed his rich, dark suit and the spotless
collar. This was a man of breeding, evidently.

"Well, Madam," he said, "any friend of the Professor is a friend of
ours." (His wife and the girls chimed in with assent.) "If you would
like a lift in our car to speed you on your errand, I'm sure Bob
here would be glad to drive Parnassus into Port Vigor. Our tire will
soon be mended."

The young man assented heartily, but as I said before, I was bent
on taking Parnassus back myself. I thought the sight of his own
tabernacle would be the best balm for Mifflin's annoying experience.
So I refused the offer, and explained the situation a little more
fully.

"Well," he said, "then let me help in any way I can." He took a
card from his pocket-book and scribbled something on it. "When you
get to Port Vigor," he said, "show this at the jail and I don't
think you'll have any trouble. I happen to know the people there."

So after a hand-shake all round I went on again, much cheered by
this friendly little incident. It wasn't till I was some way along
the road that I thought of looking at the card he had given me. Then
I realized why the man's face had been familiar. The card read quite
simply:

It was the Governor of the State! 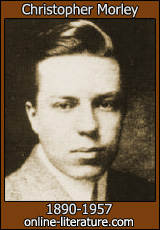