Search
Advanced Search
Thomas More (1478-1535), was recognized throughout early sixteenth-century Europe as one of the great lawyers, Christian humanists, and classical scholars of his day.

Thomas More was born in London on February 7, 1478, son of judge Sir John More. He studied at Oxford University and later studied law at New Inn. One of his first works was a translation of a Latin biography of Pico della Mirandola, published in 1510.

At the age of 26 More was elected to Parliament; at 27 he married Jane Colt and fathered four children in the next five years. Jane died when More was 33, leaving him with four young children during the height of his career as a lawyer. Despite his deep sorrow, he married again within one month for the sake of his children. With his gifts of intellectual genius and endearing wit plus his reputation for virtue, More was much sought after as a lawyer and diplomat. At the age of 32, he began his work as a judge, a position that made him well-known and loved among the general London citizenry.

Throughout these years, More was also active in the areas of literature and philosophy. His Utopia(published in Latin, 1516, translation, 1551) a work considered by some to be one of the finest Socratic dialogues of all time, has long been recognized as his masterpiece.

Once in the King's service, More commanded Henry VIII's friendship and trust, serving primarily as his personal secretary, but with some administrative and diplomatic responsibilities. He rose steadily over the next ten years, finally becoming Chancellor in 1529, at the age of fifty-one. More was Chancellor for only thirty-one months. He resigned on May 16, 1532, the day after Henry VIII and Cromwell manipulated the Parliament to take away the traditional freedom of the Church, a freedom that had been written into English law since the Magna Carta.

Imprisoned in the Tower of London for fifteen months before his execution, More was heavily pressured by his family and friends to sign the oath accepting Henry VIII as the Supreme Head of the Church in England. More steadfastly refused but never expressed animosity towards those who complied. During this time, he wrote a number of devotional and exegetical works, including A Dialogue of Comfort Against Tribulation, A Treatise on the Passion, and The Sadness of Christ.

More was executed on July 6, 1535, and canonized on May 19, 1935. He has become a symbol of professional integrity, famous for the balanced judgment, ever-present humor, and undaunted courage.

People who have already read "Utopia"

Hello, this is my first day on this site, and in my honors history class we just got this book by Thomas More. I was wondering if anyone could help me to understand it a little bit better before I read it. Um...maybe give me a little insight as to what I'm getting myself into. Thanks you so much please respond....

Hi Im new here, and this is hopefully the last place I will have to go for help. My final for my Ap English Class, is this Tuesday, I have read the book by Sir Thomas More, and unfortuantely for me, I have to do a diorama on Utopia. I have no idea how to create a diorama using the book. I have only 4 1/2 days until it is due, I would appreciate any help that would be given. Please e-mail me with any suggestions at, [email protected] . Thank you, your time is greately appreciated. Allison... 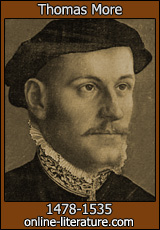 Here is where you find links to related content on this site or other sites, possibly including full books or essays about Thomas More written by other authors featured on this site.