"What! Would you make no distinction between hypocrisy and devotion? Would you give them the same names, and respect the mask as you do the face? Would you equate artifice and sincerity? Confound appearance with truth? Regard the phantom as the very person? Value counterfeit as cash?"--from Tartuffe, Cléante, act 1, sc. 5

Some say Molière's most brilliant and controversial play is Tartuffe which was met with much outrage and censure by the church. "As the purpose of comedy is to correct the vices of men, I see no reason why anyone should be exempt."-- from the preface of the 1669 version. Satirising hypocritical figures, lampooning academic pretentiousness and even specifically integrating his detractors into his scripts won Molière wide acclaim for his neoclassical French comedies. To this day Molière's works continue to hold sway in the theatre world and many of his works have inspired adaptations to film including the French 1984 version "Le Tartuffe" starring Gérard Depardieu.

Jean Baptiste Poquelin was born on 15 January 1622 in Paris, France, the son of Marie and Jean Poquelin. Not interested in his father's furniture and upholstery business, he attended the Jesuit Collège de Clermont. However he found his true calling when soon after he formed the Illustre Théâtre acting troupe with Madeleine Béjart. Around this same time he adopted the pseudonym Molière.

Years of travelling and performing throughout France helped him hone his acting and playwrighting skills, inspired by the Italian commedia dell'arte troupes. He also influenced the style, direction, and deployment of stage productions of the time. Returning to Paris he eventually won patronage from the brother of King Louis XIV. Becoming the official entertainers to the Sun King and his court came with its privileges, which Molière would enjoy for the rest of his life. In 1662 he married actress Armande Béjart with whom he would have a daughter, Esprit Madeleine, born in 1665.

The Learned Ladies (1672)
"Reasoning is the pastime of my whole household, and all this reasoning has driven out Reason."-- Chrysale, act 2, sc. 7
"A learned fool is more a fool than an ignorant fool."-- Clitandre, act 4, sc. 3

In perhaps a bitter and dramatic twist of irony, during a performance as Argan in his last play The Imaginary Invalid (1673), a comedy of hypochondria and quackery, Molière himself suffered a massive haemorrhage and died soon after on 17 February 1673. Due to Armande's and King Louis XIV's pleas to the church for a proper Christian burial, he now lies buried in Cimetière du Père Lachaise, Paris, France.

So I throw myself at the mercy of your knowledge and ask whomever may know - is it worth it to read Moliere in English or do the works get so lost in translation that readers of the translations do not get very much out of it? Any insight would be great, thanks,... 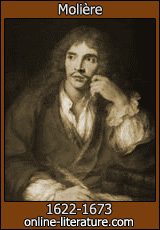 Here is where you find links to related content on this site or other sites, possibly including full books or essays about Jean Baptiste Poquelin Moliere written by other authors featured on this site.