She sang as she worked,
And the harp-strings spoke;
Her voice never faltered,
And the thread never broke.
And when I awoke,—

There sat my mother
With the harp against her shoulder
Looking nineteen
And not a day older,

A smile about her lips,
And a light about her head,
And her hands in the harp-strings
Frozen dead.

And piled up beside her
And toppling to the skies,
Were the clothes of a king’s son,
Just my size.

Millay’s poetry collection The Harp Weaver and Other Poems (1923) earned her the Pulitzer Prize in 1923. She wrote over two hundred sonnets and lyric poems and is renowned for her mastery of rhyming meter and style. Her use of frank and accessible imagery has made her poems popular among generations of readers. A diminutive red-head and openly bi-sexual, she was loved by many for her vivaciousness and humour. A gifted observer of society, she also wrote plays and political articles. A proponent of Women’s Rights, she was not without her critics who, during World War II condemned her for her support of the Allies. She was given many awards and bestowed many honours during her lifetime including honorary Litt. D. degrees from Tufts (1925) and Russell Sage (1933) Colleges; a Litt. D. from the University of Wisconsin (1933); an L.H.D. from New York University (1937); and a Litt.D. from Colby College (1937). She was elected to the National Institute of Arts and Letters in 1929, made Laureate of the General Federation of Women’s Clubs in 1933, elected to the American Academy of Arts and Letters in 1940, and she won the Frost Medal from the Poetry Society of America in 1943. Millay was widely read and respected during her lifetime and her literary influence is still noted into the 21st Century.

Edna St. Vincent Millay was born on 22 February 1892 in Rockland, Maine, the first of three daughters born to Cora Lounella Buzelle and school teacher Henry Tolman Millay. Family and close friends called Edna ‘Vincent’. She had two sisters, Norma (b.1893) and Kathleen (b.1896). Cora taught her daughters to be self-sufficient, and from an early age she taught Edna to read and write poetry. Edna also read many of the literary giants including William Shakespeare and John Milton. She also studied to be a concert pianist and learned to compose music. Childhood is the kingdom where nobody dies. Nobody that matters, that is. (“Childhood Is the Kingdom Where Nobody Dies”, 1934). In 1900 her parents divorced due to financial problems and Cora and her daughters lived in various parts of Maine before settling in Camden. Cora worked as a nurse to support her daughters, while Edna attended Camden high school where she became the school’s magazine editor-in-chief. In 1906 her poem “Forest Trees” was the first of a number of poems published in St. Nicholas Magazine.

In 1912, Millay’s poem “Renascence” was published to wide acclaim;

All I could see from where I stood
Was three long mountains and a wood;
I turned and looked another way,
And saw three islands in a bay.

--
I know not how such things can be;
I only know there came to me
A fragrance such as never clings
To aught save happy living things;
A sound as of some joyous elf
Singing sweet songs to please himself,
And, through and over everything,
A sense of glad awakening.

--
The heart can push the sea and land
Farther away on either hand;
The soul can split the sky in two,
And let the face of God shine through.

The positive attention it drew was enough encouragement for her to continue her education. She enrolled in Columbia University’s preparatory Barnard College before entering Vassar College in 1913. There she studied theatre, wrote and acted in many play productions, and wrote the music and lyrics to a number of Vassar events. She graduated with a B.A. in 1917. Renascence and Other Poems was published the same year. In 1918 she moved to a tiny attic apartment in the heart of bohemian Greenwich Village in New York City. She was soon writing plays and, having become a member of the Provincetown Players, they produced a number of them including Aria da Capo (1921) and Two Slatterns and a King (1921). Other dramas by Millay include The Lamp and the Bell (1921), Distressing Dialogues (1924), Three Plays (1926), The Princess Marries the Page (1932), and The Murder of Lidice (1942).

Millay was also writing short stories under her pseudonym Nancy Boyd, published in Ainslee’s, Reedy’s Mirror and Vanity Fair. In the early 1920s she and her mother travelled to Europe. Her next poetry collection A Few Figs From Thistles was published in 1920, containing another of her famous poems;

My candle burns at both ends;

It will not last the night;
But ah, my foes, and oh, my friends—
It gives a lovely light.
“First Fig”

Figs was followed by Second April (1921). 1923 was an eventful year for Millay: she won the Pulitzer and married Dutch coffee importer Eugen Jan Boissevain (1880-1949) on 18 July. He helped manage her burgeoning literary career including her numerous reading tours. After travelling for a time they bought a farm in Austerlitz, New York State that they called ‘Steepletop’ (now a National Historic Landmark). It would become the gathering place for many of their friends and acquaintances and the backdrop for one of her favourite past times, gardening. In 1927 New York’s Metropolitan Opera premiered Deems Taylor’s grand opera The King’s Henchman for which she had written the libretto.

In 1932 Millay conducted her first radio poetry reading, nationally broadcast. In 1936 she collaborated with George Dillon on a translation of Charles Baudelaire’s Flowers of Evil (1936). Her life was very busy as she continued to write poetry. Further collections include Fatal Interview (1931), Conversation At Midnight (1937), and Make Bright The Arrows (1940). Her writing was curtailed when she suffered a nervous breakdown in 1944. In 1949 her husband Eugen died of a stroke. Edna St. Vincent Millay died on 19 October 1950 at home at Steepletop, and now lies buried on the property with her husband, sister Norma, and beloved mother Cora. Norma edited The Collected Poems of Edna St. Vincent Millay (1950).

What lips my lips have kissed, and where, and why,
I have forgotten, and what arms have lain
Under my head till morning; but the rain
Is full of ghosts tonight, that tap and sigh
Upon the glass and listen for reply;
And in my heart there stirs a quiet pain
For unremembered lads that not again
Will turn to me at midnight with a cry.
Thus in the winter stands the lonely tree,
Nor knows what birds have vanished one by one,
Yet know its boughs more silent than before:
I cannot say what loves have come and gone;
I only know that summer sang in me
A little while, that in me sings no more.-
“What lips my lips have kissed”
~Sonnet XLIII. 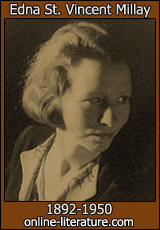 Here is where you find links to related content on this site or other sites, possibly including full books or essays about Edna St. Vincent Millay written by other authors featured on this site.