While renting a summer home, spinster Rachel Innes experiences a series of mysterious and alarming events involving ghosts and spirits, lurking shadows and murder. With spine tingling attention to detail and atmosphere, Rinehart is often compared to Agatha Christie. She wrote over sixty popular mysteries and is sometimes attributed with the phrase "the butler did it".

Mary Roberts Rinehart was born on 12 August 1876 in Pittsburgh, Pennsylvania, daughter of Thomas and Cornelia Roberts. Growing up in a household with her parents and extended family, she remembers her devout grandmother the dressmaker working long into the night in their shop in the back of the house. In her autobiography My Story (1931, revised 1948) she admits; "There was never any money in those days." Her father, in the sewing machine business, spent most of his spare time working on inventions. His design for a rotary shuttle for sewing machines was the first patented, though he created many other enterprising gadgets to no avail. With much melancholy, Rinehart remembers her anguished father taking his own life; "He went away one day and killed himself, standing in front of a mirror in a strange hotel so that the shot would not fail."

After attending Nursing school she married Dr. Stanley Marshall Rinehart, with whom she would have three sons. A hectic life of working in her husband's practice and raising her children didn't stop her from putting pen to paper. A number of her short stories were published in magazines and newspapers. The Man in Lower Ten (1906) was followed by The Circular Staircase (1908) and The Window At The White Cat (1908). Her Broadway comedy Seven Days (1909), a collaboration with Avery Hopwood was a huge success. Around this time some of her humorous pieces were published in the Saturday Evening Post, as well as her Letitia "Tish" Carberry stories, the most popular of them collected in The Best of Tish (1955). During World War I she was sent to England as a reporter for the Saturday Evening Post.

Works to follow were Where There's a Will (1912), The Case of Jennie Brice (1914), The Breaking Point (1922), The Red Lamp (1925), The Door (1930), and another Broadway play The Bat (with Avery Hopwood, 1932). A Major in the United States Army Medical Corps, Dr. Stanley M. Rinehart died in 1932 and lies buried at the Arlington National Cemetery, Washington, D.C. A few years after his death Rinehart moved to New York City where she died on 22 September 1958. She now lies buried beside her husband.

Hi. Does anyone know why her books were removed from print?... 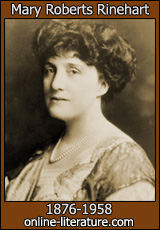 Here is where you find links to related content on this site or other sites, possibly including full books or essays about Mary Roberts Rinehart written by other authors featured on this site.