Her Presbyterian upbringing was the source of inspiration for her life's work, piety, filial love and obedience main themes, especially in the Elsie books. Finley was a simple yet elegant woman who lived a quiet life, and there are few known details of it. She never married though she knew great love through her family and beloved readers, especially children, whom she often addresses at the beginning of her novels. At one time she had over 25 million readers combined in North America and England.

Martha Finley was born on 26 April, 1828 in Chillicothe, Ohio. Her parents were first cousins Dr. James Brown Finley, and Maria Theresa Brown. The Finley family moved to South Bend, Indiana in 1836. The Finleys were affluent, and young Martha was educated at home by tutors, then attended various private schools.

Both her parents died in 1853, and Martha moved to New York and became a teacher. She later lived in Phoenixville as well as Philadelphia. While she was teaching she was also developing her writing skills and her first successes were for a newspaper and Sunday School Stories in a Presbyterian publication. She was fairly young when sickness laid her up and she was hard put to support herself. The idea of her Elsie Dinsmore character came to her during prayers, as an answer to her plight. The success of her first Elsie Dinsmore story brought on a surge of demand for sequels by her fans and publisher, until Finley produced 28 volumes in the series.

Elsie Dinsmore, whose mother died while giving birth to her, is introduced at the age of eight living on her grandfather's plantation. `Aunt Chloe', her black nurse, instils Christian values and morals in her, and often the outcast Elsie prays for patience with her tormentors who mistreat and bully her. When she is reunited with her father returning from Europe he turns a cold shoulder from misunderstanding, and only though her trials of obedience to Jesus and the Sabbath and tests of her will does she earn his love. Elsie goes on the marry one of her father's friends, Mr. Travilla, and her stories follow her through marriage and motherhood.

"She poured out her story of sins and sorrows, in simple, child-like words, into the ear of the dear Saviour whom she loved so well; confessing that when she had done well and suffered for it, she had not taken it patiently, and earnestly pleading that she might be made like unto the meek and lowly Jesus." - From Elsie Dinsmore (1867)

During the Civil War and until 1874 Finley travelled between New York and Philadelphia. When her school was destroyed during the war, she moved to Bedford, Pennsylvania to live with her sister and an aunt. In 1876 Finley's health was failing and she visited relatives in Elkton, Maryland, but soon made it her home too. Finley's ill health didn't stop her from writing, often from her bed. She died in 1909 in Elkton, Cecil County, Maryland and is buried in the Elkton Cemetery.

I haven't read the modern Millie Keith series. However, I HAVE read the 19th-century original novels, in which she's generally referred to more formally as "Mildred." In the original books Mildred is a distant "poor cousin" to the Dinsmores. She's at least 15 years older than Elsie, being in her mid-teens at the time of Elsie's birth. In the first book Mildred's lawyer father moves the family to Pleasant Plains, Indiana, a rather primitive pioneer town. Mildred, though a good Christian girl, has some faults---most notably her pride, which causes her to look down on the country bumpkin neighbors. Several of the young men try to court her, but she has no use for any of them. Then one of the...

This is sad... no one has posted anything in this sub forum. I have long been a fan of the Elsie Dinsmore series. But I first read the abridged version. I always had the preconceived biasness for unabridged books. But in this case, having read the abridged versions first, I judge it to be a lot (actually, HEAPSSSSS!!!) better than the original written by Miss Finley. I was never more surprised in my life. :nod: I can refer to the website of the Elsie, Violet and Millie Series. It is really, really good. They have some snippets of the books (btw, the books are handsomely bound. Hardcover, with the heroines themselves on the front.) I love it! ... 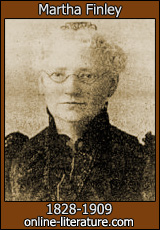 Here is where you find links to related content on this site or other sites, possibly including full books or essays about Martha Finley written by other authors featured on this site.