On 26 February 1564 at St George's, Canterbury, Christopher Marlowe was baptised, the same year Shakespeare was born. His father was John Marlowe, a cobbler, his mother Katherine. Though `Marlowe' is used now, the family's name had various spellings over the years. Not a lot is known of Marlowe's childhood and there is some question as to the dates and chronology of some of his works.

With his scholarly potential acknowledged, in 1578 Marlowe entered King's School, Canterbury, on scholarship from Matthew Parker, Archbishop of Canterbury to study music, religion, Latin and literature. Two years later he was off to Corpus Christi College, Cambridge, on another scholarship to study philosophy and history. He graduated in 1587 with an M.A. Sir Francis Walsingham recruited him, as well as many other men of letters at the time, to become a trusted government part-time secret service agent.

There are school buttery and audit records taken during his school years but little else to confirm his comings and goings, merely long absences that leave room for speculation as to his activities. Rumours suggested that he had travelled to Rheims, France as a Catholic convert but the Queen herself cleared his name in the Privy Council's letter of recommendation for his M.A. degree dated 29 June 1587;

"..in all his actions he had behaved himself orderly and discreetly, whereby he had done Her Majesty good service, & deserved to be rewarded for his faithful dealing.." and the letter goes further "..because it was not Her Majesty's pleasure that anyone employed, as he had been, in matters touching the benefit of his country, should be defamed by those that are ignorant in th' affairs he went about."

After years of performing plays in school Marlowe wrote his own and is often credited as having founded English Drama though his career was short. His earliest play features Jupiter and Ganymede in Dido, Queene of Carthage (1594) and is said to have been written during his Cambridge days. Marlowe worked on translations of Latin to English blank verse including Ovid's Amores though it was banned by the Archbishop of Canterbury in 1599 as 'unsemely'. Living in London, Marlowe made many friends including Sir Walter Raleigh, and in the Queen's service he also became acquainted with the Elizabethan court and current political climate. In 1589 while living in Shoreditch with his friend Thomas Watson, Marlowe, possibly defending Watson, fought William Bradley with sword and dagger. Bradley was killed in what was decided as self-defence.

There was a successful run of Marlowe's Tamburlaine the Great in 1587 performed by the Admiral's Men which during one performance a woman was accidentally shot. In it Tamburlaine wants to conquer heaven after conquering the world. The sequel was called The Second Part of the Bloody Conquests of Mighty Tamburlaine. Marlowe's tragi-comical parody of Niccolo Machiavelli The Jew of Malta opened in 1592. Just a year later he was arrested in the Netherlands for the petty treason act of counterfeiting gold coins though released on bail.

Massacre at Paris was first performed by Lord Strange's men in 1593; based on the turmoil in France, especially the massacre of Huguenots on St. Bartholomew's Eve in 1572. His historical play Edward II is said to have paved the way for Shakespeare's' Richard II. Marlowe's narrative rhyming couplet poem Hero and Leander (1598) is based on the Greek poem by Musaeus, and one edition is fondly dedicated to Sir Thomas Walsingham. The Passionate Shepherd to His Love is well-known and oft quoted. In the moral play Doctor Faustus (1589), after a deal with the devil turns hollow, the hero turns to Christ for salvation.

Was this the face that launch'd a thousand ships,
And burnt the topless towers of Ilium?
Sweet Helen, make me immortal with a kiss!
Her lips suck forth my soul: see, where it flies!
(From Faustus .1589)

Speculation and controversy over Marlowe's sexual orientation, religion and political views was growing. In the midst of Catholic and Protestant upheaval, he was charged among other things of atheism, blasphemy and subversion. He was involved with Sir Walter Raleigh's group the Free-Thinkers of which they were accused of being a `school of atheism'. While being tortured a former roommate, Thomas Kyd, erroneously admitted that a document denying the divinity of Christ was written by Marlowe, and Richard Baines procured his notorious `Note' attributing two statements to Marlowe: "St John the Evangelist was bedfellow to Christ and leaned always in his bosom, that he used him as the sinners of Sodoma," and "That all they that love not Tobacco & Boies were fooles". Marlowe would escape imprisonment likely by his government connections.

While there is some evidence that his death could have been faked, and there was a warrant issued for his arrest a week earlier, the popular conclusion is that on 30 May 1593 Christopher Marlowe died of a stab wound in a possible government safe house in Deptford. Included in the political intrigue surrounding his death are mixed accounts as to the cause but the main one being that he was stabbed by Ingram Frizer who was allegedly defending himself during an argument. Marlowe was buried on 1 June 1593 at St Nicholas's, Deptford. The actual grave is not marked but there is a commemorative plaque in his honour on the west wall of the churchyard.

There is a famous portrait that is alleged to be of a young and handsome Marlowe wearing a velvet doublet with shoulder-length hair. In the top left corner is his age (`aged 21 in 1585') the date and his possibly prophetical motto `Quod me nutrit me destruit'. (`That which feeds me destroys me')

Come live with me, and be my love;
And we will all the pleasures prove
That valleys, groves, hills and fields,
Woods or steepy mountain yields.
(from The Passionate Shepherd to His Love c. 1589)

Hello Everyone! I have a huge favour to ask, to anyone who is willing to lend a hand. I am writting an MA thesis on Christopher Marlowe's plays. For this I need 3 biographies of Marlowe, which are unavailible in my country. They are: Park Honan (name, surname), 2005, Christopher Marlowe. Poet and Spy, OUP, Harry Levin, Christoher Marlowe. The Overreacher, Faber, 1965 John Bakeless (1942), The Tragicall History of Christopher Marlowe, Harvard Uni. Press I don't need those exact editions, just the books themselves. The most important thing is I have very little time (till the end of August), thus I would need a digital copy, because standard ...

Doing an english paper comprised of love poems from edgar allan poe and christopher marlowe. My teacher tells me that Marlowe has written sonnets, but online-wise i can't find any sonnets of his. help....

Am I right? Faustus is not about the church?

Ok, I joined a book club...yes, I know, pretty dorky huh? I don't think I would have ever read Marlowe's Dr. Faustus without it. I really enjoyed the play but as a group, we spent much time arguing over its religious implications. I am the only one who does NOT think that Marlowe was speaking against the church or even that spirituality was his main focus. At least thats not what came across to me. The fate of Faustus is obvious. Equally obvious is what drove him to this end, lust, specifically for knowledge and power, among other things. But The BK president disagrees. She says Marlowe may be telling us, in a subtle way, of the ineffectiveness of the Church in protecting man'...

This is often considered Marlowe's most perfect work. Do you agree?...

anybody know where i can find a study guide for Edward II on-line??? Anything would be helpful!!!...

Do you think the old man in Dr. faustus is the voice of his conscience...Or the old Man is a minor character That Marlowe used as an external voice of people around Faustus...

i would appreciate some help on this one

hi everyone i need to write an appreciation on the poem the passionate shepherd to his love for wednesday and i do not know how to express my own personal approah to this poem. i have been asked to write specifically about what the poem means to me, but i really have no idea so i would appreciate if someone could give me an idea. thanks, sazzy b... 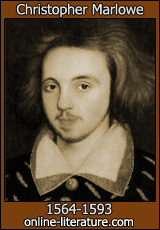 Here is where you find links to related content on this site or other sites, possibly including full books or essays about Christopher Marlowe written by other authors featured on this site.