Francis Marion Crawford was born in Bagni di Lucca, Italy, on 2 August 1854. He was the son of Louisa Cutler Ward and Protestant American sculptor Thomas Crawford (d. 1857) who had immigrated to Rome and who's statue "Armed Freedom" adorns the Capitol dome in Washington, D.C. The family lived in Rome but never lost sight of their American roots.

Crawford's father died when he was just three years old and his mother Louisa remarried Luther Terry, an American painter. Crawford's early schooling was from private tutors. In 1866 he was sent to St. Paul's School in Concord, New Hampshire. 1869 he returned to Rome then went on to travel throughout Italy, England and Germany. He was an extraordinary linguist of twenty languages including studying Sanskrit at the University of Rome. When he travelled to India, there until 1880, he converted to Roman Catholicism.

Crawford was back across the Atlantic in 1881 landing in Boston to seek literary employment and possibly a career in politics though he knew little about American politics. His first published novel Mr. Isaacs: A Tale of Modern India (1882) was an instant success. It is based on his experiences in India including meeting his friend Alexander M. Jacob whom Crawford had met while editing a newspaper in Simla, India. Books to follow were Doctor Claudius, (1883) To Leeward, (1883) A Roman Singer, (1884) and An American Politician: A Novel. (1885) Amid rumours and scandal Crawford had also became friends with Boston socialite, art patron and museum founder Isabella Stewart Gardner.

In 1884 he travelled to Constantinople, where in the French Catholic church of Pera he married Elizabeth Christophers Berdan, daughter of General Hiram Berdan. They lived in Rome with Crawford's mother and had four children. By 1887 he was ready to settle down to a career in writing and bought a villa in Sant' Agnello di Sorrento, to be named "Crawford Villa", which would be turned into a convent after his death. Sometimes writing several novels a year, Crawford's most prolific period was between 1885 and 1895. His Saracinesca trilogy, of Don Giovanni when Rome was still the capitol of the Papal States, is considered among his most impressive works. Saracinesca, (1887) Sant' Ilario, (1889) (dedicated to his wife) and Don Orsino. (1892) Written in the same period were A Tale of a Lonely Parish, (1886) Marzio's Crucifix, (1887) Paul Patoff, (1887) Greifenstein (1889) and The Witch of Prague. (1891)

Crawford wrote about duels and the nobility, love and adventure, arranged marriages and romance. He wrote of the Italian Republic and the Vatican from his Catholic perspective without preaching. In 1893, defending romance and his work in The Novel: What It Is, (1893) his philosophy was that books are for entertaining, a "pocket theatre". Titles to follow it were By the Waters of Paradise, (1894) Katherine Lauderdale, (1894) The Ralstons, (1895) Casa Braccio (1895) and Corleone: A Tale of Sicily. (1896) Crawford gained remarkable success, fame and affluence that was envied by many of his peers. By 1896 it was estimated that more than 600,000 of his novels sold in the United States. This established Crawford as a major American writer. He made frequent trips to Washington and Chicago and many other cities in the United States to lecture (1897-1898) on the history of Italy and the life of then reigning Pope Leo XIII. Crawford tried his hand at historical non-fiction with Ave Roma Immortalis (1898) and The Rulers of the South: Sicily, Calabria, Malta, (1900) and the historical novels Via Crucis (1899) and In the Palace of the King. (1900) and the novel The Heart of Rome. (1903) In 1905 another of his histories was published: Salve Venetia: Gleanings from Venetian History.

The F. Marion Crawford Memorial Society was founded in 1975.

One of Marion's daughters, a nun, lived at Villa Crawford after it became a convent. 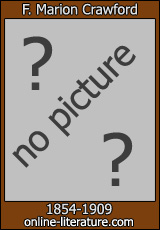 Here is where you find links to related content on this site or other sites, possibly including full books or essays about F. Marion Crawford written by other authors featured on this site.