Having, out of friendship for the family, upon whose estate, praised be Heaven! I and mine have lived rent-free time out of mind, voluntarily undertaken to publish the MEMOIRS OF THE RACKRENT FAMILY, I think it my duty to say a few words, in the first place, concerning myself. My real name is Thady Quirk, though in the family I have always been known by no other than 'Honest Thady,' afterward, in the time of Sir Murtagh, deceased, I remember to hear them calling me 'Old. Thady,' and now I've come to 'Poor Thady'; for I wear a long greatcoat winter and summer, which is very handy, as I never put my arms into the sleeves; they are as good as new, though come Holantide next I've had it these seven years: it holds on by a single button round my neck, cloak fashion.--Chapter 1

One of the eminent intellectuals in Irish history, for more than a quarter-century Edgeworth bore her high standards as an educationist and writer on class, race and gender. Outspoken and small in stature she was never short on grace and wit. Maria Edgeworth was born on 1 January 1768 at her maternal grandfather's home at Black Bourton, Oxfordshire, England. Her father, an Anglo-Irishman, Richard Lovell Edgeworth (1744–1817), writer, scientist, inventor and educationist, would marry four times and in total have twenty-four children. Her mother, Anna Maria Elers (1743–1773), died when Maria was six. She was attended by Dr. Darwin, the father of Charles Darwin, who tried in vain to save her. Honora Sneyd (d.1780) became Maria's first step-mother.

Under the ever-watchful eye of her father, a follower of Jean Jacques Rousseau, his high hopes for her led her to attend Mrs. Lattafière's school in Derby until 1780 studying among other subjects dancing and French, then on to Mrs. Davis's school in Upper Wimpole Street, London. She loved to tell stories in the dorms and wrote many for her siblings and assisted in their education and upbringing. She was a fast learner and voracious reader though her eyes troubled her with inflammation at times. When her mother died, she as the eldest became very close to her father who would give her writing assignments while young, and who was to profoundly influence her work, insisting on reading and editing most of the works she produced while he was alive. It's often said that he was too heavy-handed and interfering, that the moral tone and preachment she sometimes affected was not genuinely hers and stunted her expression.

Honora Sneyd died in 1780 and Edgeworth's father remarried her sister Elizabeth within months. In 1782 the ever-growing Edgeworth family travelled to the family estate in Edgeworthstown, just north of Dublin. There she would live among the landed gentry for most of her life assisting her father with secretarial and accounting duties in running his estates, working in their massive book-lined library. She would ride her cob pony alongside him on his horse while he went on his rounds of the fields, gathering information through keen observation an intimate knowledge of the locals. Edgeworth became well-acquainted with the Irish tenants and peasant class and the majority of her stories centred on them, treating them with sincere dignity in realistic but fictional characters. The Irish Rebellion of 1798 led to some memorable events in Edgeworths' life; the young girl and her extensive family escaped rebels who were working their way towards Dublin, her father took up arms to defend Longworth from the French and they were driven from their home to take shelter at a nearby Inn. During this time Edgeworth collaborated with her progressive thinking father to write Essays on practical education which appeared in 1798. He father would enter the Irish of Commons this same year.

Margaret Ruxton was one of Edgeworth's aunts and would become a close confidant. She would write to her of their adventures from the Inn where they had taken refuge during the rebellion. One of Edgeworth's first publications was her feminist essay Letters for Literary Ladies (1795), a plea for reform in women's education. In 1802 the always sensible Maria and her father travelled to France during which a Swedish courtier Monsieur Edelcrantz courted her, though her loyalty to Ireland kept them from marrying.

The title page of her first and most famous Irish tale which she first had published anonymously, Castle Rackrent (1800), says "an Hibernian Tale. Taken from facts, and from the manners of the Irish squires, before the year 1782". Edgeworth uses a before-rarely used device of narrator telling the tale of the decline of a fictional family of profligate landlords. King George the III, after reading it said, "I know something now of my Irish subjects". It is said that the seeming class bias against the landlords of Maria's Irish tales, especially absentee ones, is purely accidental. She was not a radical as one might intimate from Rackrent.

Edgeworth was becoming known in fashionable literary and social circles, receiving mostly favourable reviews though also criticised for being too didactic and moralistic, with a tinge of colonialism. She was a pioneer of social realism and historical tales, influencing the younger writers at the time including William Makepeace Thackeray, Ivan S. Turgenev and Jane Austen, with her mostly hero-less tales. During her second visit to Paris in 1820 she was warmly received and counted among her friends Jeremy Bentham, Lord George Gordon Byron, Stendhal, Talleyrand, her publisher J. G. Lockhart, Etienne Dumont, and Sir Walter Scott. In 1825 she visited Abbotsford in Scotland. There is a stone at Tyhmer's Waterfall where it is said Maria visited and which bears the name "Edgeworth Stone".

After her father's death, Edgeworth became more politically conservative in her views and she turned to writing children's stories again, including Rosamond, a sequel (1821). Helen (1834) was her last full-length novel. Wanting to promote literature in Ireland, Sir William Rowan Hamilton, president of the Royal Irish Academy, sought Edgeworth's advice. One of her main points of reform was that women be included in their evening parties. She was made an honorary member of the academy on 13 June 1842.

The first signs of famine in Ireland started in 1845 and Edgeworth assisted in the support of the sick and destitute, working strenuously for the relief of the famine-stricken Irish peasants, though she and her own family barely survived. Her favourite stepsister Fanny died in 1848. At home on 22 May 1849 after complaints of heart pains, Maria Edgeworth died suddenly. She is buried in the family tomb at St. John's Church, Edgeworthstown, Longford, Ireland. 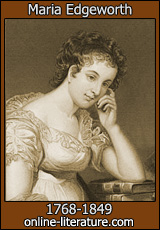 Here is where you find links to related content on this site or other sites, possibly including full books or essays about Maria Edgeworth written by other authors featured on this site.