The Pepper family would soon become beloved by readers all over America. Young people avidly followed the adventures of Ben, Polly, Joel, Davie, and Phronsie. While faced with many plausible trials and obstacles they remain eternally optimistic in the face of adversity, and reflect the real life issues of so many of their readers. Their universally appealing wholesome values and lives are not burdened with a heavy moralising tone which was present in many other popular works of the day.

Harriett Mulford Stone was born on 22 June 1844 in New Haven, Connecticut. Her father was Sidney Mason Stone, an architect. The Stone family often traveled in rural New England, such visits providing material and inspiration for the young and creative Harriet's future stories and characters.

In 1881 Sidney married Lothrop, who was also the founder of the D. Lothrop Publishing Company of Boston. They had one daughter, Margaret, born in 1884. Lothrop died on 18 March 1892. Sidney and her daughter traveled to Europe a number of times in the winters, and spent the rest of their time living at "The Wayside" at 455 Lexington Road in Concord, Massachusetts. It was once the home of Nathaniel Hawthorne, now a National Historic Landmark and museum. Like her husband, Sidney was active in local and national civic and historical causes, including the preservation of their grand home "The Wayside" and commemorating the life and works of Hawthorne of whom she admired greatly. She was involved with the Daughters of the American Revolution, Old Concord Chapter, and for a number of years founder (in 1895) and president of the National Society of the Children of the American Revolution. She was also instrumental in the preservation of Louisa May Alcott's "Orchard House".

Although Sidney loved children and loved writing for them The Peppers were not the only works she produced. She wrote poetry, fiction and non-fiction for adults including Old Concord: Her Highways and Byways (1898). Many of her articles were published in magazines and newspapers including The Practical Housekeeper and The Christian Union. The Wayside: Home of Authors (1940) was Sidney's last tribute to the rich history of Concord and its writers.

While living with her daughter in California, she died in San Francisco on 2 August 1924 and is buried on Author's Ridge of the Sleepy Hollow Cemetery in Concord, Massachusetts, among other such illustrious authors as Henry David Thoreau, Louisa May Alcott, and Nathaniel Hawthorne.

How did the author meet Daniel Lothrop?

Does anyone know if Harriet Milford Stone a/k/a Margaret Sidney knew publisher Daniel Lothrop before he purchased her first story? I am researching the children's magazine Wide Awake and know Margaret Sidney married her publisher soon after Five Little Peppers and How They Grew was published as a book. I'm trying to find out a little more about the couple before they became an official couple. Is there a longer biography I can read to learn more? Thanks for any help you can give me.... 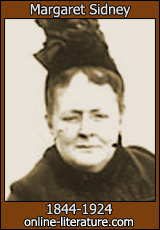 Here is where you find links to related content on this site or other sites, possibly including full books or essays about Margaret Sidney written by other authors featured on this site.