When Marilla and Matthew Cuthbert of Green Gables, Prince Edward Island, send for a boy orphan to help them out at the farm, they are in no way prepared for the error that will change their lives. The mistake takes the shape of Anne Shirley, a redheaded 11-year-old girl who can talk anyone under the table. Fortunately, her sunny nature and quirky imagination quickly win over her reluctant foster parents. Anne's feisty spirit soon draws many friends--and much trouble--her way. Not a day goes by without some melodramatic new episode in the tragicomedy of her life. Early on, Anne declares her eternal antipathy for Gilbert Blythe, a classmate who commits the ultimate sin of mocking her hair color. Later, she accidentally dyes that same cursed hair green. Another time, in her haste to impress a new neighbor, she bakes a cake with liniment instead of vanilla. Lucy Maud Montgomery's series of books about Anne have remained classics since the early 20th century. Her portrayal of this feminine yet independent spirit has given generations of girls a strong female role model, while offering a taste of another, milder time in history.

When little red-haired Anne Shirley was sent to Green Gables, she was considered a mistake for not being a boy. But the decision by the Cuthberts and the mistake of Ms. Spencer, the mistress of an asylum, all together was a lucky thing. Anne had lived every day of her childhood at Green Gables happily and adventurously, full of games with her best friends and funny mistakes, with her jovial nature and "kindred spirit", until the day came that she had to grow up. And then, it was time for her to decide. Enjoy the tale. Join in the adventure. And then slowly think again of this elegant masterpiece of Lucy Maud Montgomery.--Submitted by Molly Mai moon marshmallow

Hi everyone! I am a new member at this forum and this is my first post :D For my research paper, I am studying the classic Anne of Green Gables and i am stuck on this one question : Examine the theme 'coming of age" in Anne of green gables and explore how it is developed in the book and why it is significant to the plot. All replies are appreciated ::)

HAPPY CHRISTMAS, EVERYONE!!! Hope you've got lovely holiday break!!! I'm here just for my sister. She asked me to get her some articles, books or views about Anne of Green Gables. This is her subject for university degree. She's doing English Studies back in Poland but there is not such thing like English library or so. So me poor thing in Birmingham, UK, need to get her BA degree materials and I've got no clue where to start my searches..... Just because it's Christmas..............PLEASE, HELP!!!!!!!!! Don't want to leave her with nothing.... Once again - Happy Christmas!!! Best Wishes, Mon

Anne with an e

I just finished reading the Anne series. I declare that Anne touches my heart and so does Lucy Maud. How she makes stories out of commenplace event that may happen to any one. I relived my childhood reading these 8 books. We all see and notice things but very few of us could really write stories like that. That reminds me how I used to write stories and it used to annoy me when my teacher said they were not good enough for the magzines. After reading the Anne series I went through my childhood litterature and now I know why my teacher said that.....Ans I am convinced ;)

i had actually asked my english teacher for "A pair of blue eyes " but got "Anne of Green Gables". i was at first disappointed but discovered ecstasy in the story. now, Anne is my role model. She has taught me valuable lessons in life. i have become more easy in mind and am finding happiness in subtle thing as mentioned in the book. i no longer am disappointed but rather imagine things to be as i want them to be.

I remember a few years ago I took the whole Anne of Green Gables collection, there are 8 books in all, and read them all. It was by far one of the best summer projects I have undertaken. I personally like "House of Dreams", which is another forum here. "Rainbow Valley" was also very cute because it shows the children's side of the story more than the adults. It is very much the crowning touch of her career, I have read other things and it did not strike me the same way. There is also the "Avonlea" series, but not those really short books you can get for every episode of the show that aired in Canada. There were two actual books. Then, there was the Emily series, which also was a television series in Canada. I have read one of them, the others are in my "to read" pile. I am thinking I might have another summer with LMM Montgomery again, read all her books that are not part of the Anne series. There are also her diaries. I have the first one, one day I would like to have them all. It is interesting both to learn about the author but also historically.

The heart of Anne Shirley

I was introduced to the Anne series by 'Anne of the Island' recently, and I find it quite an unforgettable experience. The Anne series are one of those rare books that can make you stay up all night in order to finish the book, but leave a nostalgic tang once the story is over. L.M. Montgomery's vivid descriptions of the nature surrounding the quaint, rural Island transports us into that very world, whilst reminiscing childhood days in a wonderfully sentimental way. We laugh, feel, see, hear, cry and share dreams with Anne. We grew up with her and her friends -- Diana, Gilbert, Marilla, Mrs Rachel Lynde, Matthew... it's as if we have merged with Anne throughout her years and are conscious of everything she feels. The Anne series are very bittersweet; the ending of 'Anne of Green Gables' being something sorrowful and triumphant at the same time. Matthew had passed by at last, leaving sweet memories behind. But the loss is made up with the gain of a new friend, Gilbert Blythe. "Youve thwarted destiny long enough," he says. Here the stage is set. Anne and Gilbert's fate is sealed, foreshadowing that in the later future they are meant for each other. 'Anne of Avonlea' follows in the same vein, where Anne ends the story with Gilbert, once again. In the dusky failing light, Anne catches a glimpse into her 'veiled' heart when she gazes into Gilbert's eyes. The 'veiled heart' symbolizes something that has hidden her true innermost feelings, and it closes down upon her again, there hanging dusty for years until she finds it again in 'Anne of the Island'. Foreshadowing is heavy in this book, with subtle hints by Diana and Marilla scattered all over the chapters. She also has to deal with changes in life, and it is hard for her to accept it. Being the hopeless romantic she is, she desperately hopes for a constant in her small but precious world, a bubble in time where nothing fades away. She wants to stay as kids with Diana, she wants Gilbert to remain friends and nothing more, and she wants to stay in Avonlea for the rest of her life. But she finds herself slowly drifting away from that 'world', and she sighs regretfully at the end as she looks out at the eternal beauty of Avonlea. Not only that, Anne has finally reached the 'bend in her road', as she described romantically in the closure of the first book, and is boldly walking on to find out what is on the other end. She finds four years at Redmond College at the turn of the bend, and four years of companionship with Gilbert, who is also going with her. By entering college, she is continuing the dream that was shrouded after the death of Matthew, picking off where she left off in 'Anne of Green Gables'. This ending merges into an interlude appropriate for the next book of the series: 'Anne of the Island'. 'Anne of the Island' starts off with a light tone, but no doubt Anne Shirley will have to confront with more conflicts and changes in life than ever. She is rapidly leaving girlhood and must now come to acknowledge that romantic love will soon play an important part in the sweetest, most delicate chapter in a woman's life. Here the 'veiled heart' comes back to haunt Anne, when she is faced with a proposal by Gilbert. She turns down the proposal, deluded into believing that she has no intimate feelings for her boy-comrade of old. She is also further confused by her imagination of what love it supposed to be like, and what love really is. That very theme is portrayed in her affections for Roy Gardner as opposed to those for Gilbert Blythe. Quoting a line in Anne of Avonlea: Perhaps, after all, romance did not come into ones life with a pomp and a blare, like a gay knight riding down; perhaps it crept to ones side like an old friend through quiet ways; perhaps it revealed itself in seeming prose, until some sudden shaft of illumination flung athwart its pages betrayed the rhythm and the music; perhaps perhaps love unfolded naturally out of a beautiful friendship, as a golden-hearted rose slipping from its green sheath. The book closes with a sentimental scene in Hester Gray's garden, where Anne is wistful that she has finally entered into a new chapter in life, leaving girlish desires and dreams for ever. She will now step into wifehood, and at that moment Anne reaches another bend in the road. But this time she knows what will be in the corner. With the closure of 'Anne of the Island', the supposed trilogy is fully over. Although later books will paint pleasant pictures of Anne and her family, the first three books will always remain the closest to the readers heart. Anne started off in Avonlea with hopeful, fresh dreams in 'Anne of Green Gables', and left Avonlea in Anne of the Island with dreams fulfilled and rose-tinted memories in the garret of her heart.

Anne of Green Gables is certainly one of the most brilliant books that ever was written, and the following books are just as good! They all definately have lots of 'scope for imagination'!
Good on Lucy Maud Montgomery! One of the best writers the world had been gifted with.

A very good story that all should read at least once in their life time. Any time a person has a little spare time, he or she should grab this book and read it. I have never read anything better then Anne of Green Gables.

I've been watching this with my daughter. We were wondering, what had happened to her family? Where are her parents? Did I miss that part?

Post a New Comment/Question on Anne of Green Gables

Here is where you find links to related content on this site or other sites, possibly including full books or essays about Lucy Maud Montgomery written by other authors featured on this site. 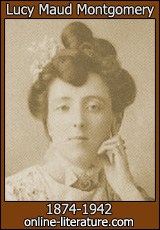