Important sources of historical and cultural references, the Twins books were widely read by children and young adults in schools and homes all over North America and translated to numerous languages. With illustrations by Perkins, they describe life in other countries and deal with subjects as wide-ranging as familial relationships and war, religion and coming-of-age in relation to the given country with a touch of humor and sometimes dramatic surprise. Some of the books also retell various regional legends and folk tales. Perkins tapped into a vast educational resource for the promotion of and understanding of ourselves and each other.

Lucy Fitch Perkins was born on 12 July 1865 in Maples, Indiana, the daughter of factory owner Appleton Howe Fitch and Elizabeth Bennett. Her Puritan upbringing included a strong value on education. Perkins started her career as an artist; first studying in Boston at the Fine Arts School, she then obtained a position as book illustrator with the Louis Prang Educational Company. She then was asked to teach art at the Pratt Institute in Brooklyn.

In August of 1891 she married architect Dwight Perkins, a teacher at the Massachusetts Institute of Technology of Chicago. After the couple settled Lucy began in earnest her career as teacher and illustrator, but she was also writing poetry and stories. Her first book the The Dutch Twins was published when she was forty-eight. She then produced one or two more books each year. Perkins was active in a number of community arts, social reform and women's rights movements, including the Chicago Womans Club and the League of Women Voters. Her benevolence and ideals towards education and tolerance of others lives beyond her seventy-two years. She died while on vacation in Pasadena, California on 18 March 1937. Her daughter Eleanor Ellis Perkins wrote Eve Among the Puritans: A Biography of Lucy Fitch Perkins (1956). 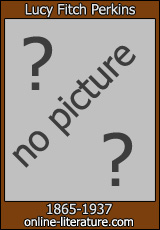 Here is where you find links to related content on this site or other sites, possibly including full books or essays about Lucy Fitch Perkins written by other authors featured on this site.