Once upon a time, many years ago when our grandfathers were little children--there was a doctor; and his name was Dolittle-- John Dolittle, M.D. "M.D." means that he was a proper doctor and knew a whole lot.

He lived in a little town called, Puddleby-on-the-Marsh. All the folks, young and old, knew him well by sight. And whenever he walked down the street in his high hat everyone would say, "There goes the Doctor!--He's a clever man." And the dogs and the children would all run up and follow behind him; and even the crows that lived in the church-tower would caw and nod their heads.

Hugh John Lofting was born in Maidenhead, Berkshire county, England on 14 January 1886. His father was an Irishman, John Brien Lofting and his mother, Elizabeth Agnes Gannon, was English. Even as a young man Hugh loved animals and had a great imagination. Creative and ambitious, at the age of eighteen he traveled to the United States to begin his study of civil engineering at the prestigious Massachusetts Institute of Technology. He graduated from London Polytechnic and launched into fulfilling his dream of traveling the world, first working in Canada in 1908 as a surveyor.

He worked for two different railways over the next few years, traveling to such places as west Africa and Cuba, although after these experiences he was ready to move on from engineering. He settled in New York City and put pen to paper, writing short stories and sketches about his travels which were published in various magazines and newspapers. In 1912 he met and married Flora Small, with whom he'd have two children: Elizabeth Mary (b.1913) and Colin MacMahon (b.1915). Still a British subject, Lofting worked for his country's Ministry of Information from New York City during World War I, though he also served some time abroad in the Irish Guards in Flanders and France.

It seems that a great solace to Lofting under the duress of war were his letters home to his children. Writing from the trenches as he witnessed the abuses of power and pointlessness during conflict, he also observed the pain and suffering of mutely stoic war-horses and beasts of burden as they were used for man's gain, only to endure ignoble deaths in the end. He turned this horror into something positive and as celebrations of the animal world, advocating respect and understanding in his stories. Sketches of his eccentric and charming characters Dr. John Dolittle, country veterinarian and the creatures he cared for accompanied the stories that would form the basis for his future works.

After being invalided home from shrapnel wounds in 1919, Hugh was back to writing full-time including a number of articles published in The Nation about the glorification of war. His first novel The Story of Doctor Dolittle was published in 1920 to great success in England and America. In it the good Doctor of Puddleby-on-the-Marsh discovers he can speak with animals including Chee-Chee the monkey, Dab Dab the duck, Jip the dog, Polynesia the parrot, and the celebrated and exotic Pushmi-Pullyu, an African antelope with two heads. The Doctor prefers to tend to animals over humans, though he has a few friends including Matthew Mugg. It is clear that Lofting's own despair with humanity and cynicism towards recent events influenced the themes in his Dolittle stories and characters. It was not soon after that the high-seas adventures in The Voyages of Doctor Dolittle (1923), narrated by ten-year old Tommy Stubbins was being read by little boys and girls everywhere including his own children, Colin himself affectionately known as Doctor Dolittle. The novel earned the American Library Association's Newbery medal the same year. Some of his many works to follow were Dr. Dolittle's Post Office (1923), The Story of Mrs. Tubbs (1923), Gub Gub's Book (1923), Dr. Dolittle's Circus (1924), Porridge Poetry (1924), Dr. Dolittle's Zoo (1925), Dr. Dolittle's Caravan (1926), and Dr. Dolittle's Garden (1927).

A period of much grief ensued for Lofting when in 1927 his first wife Flora Small died. His second wife Katherine Harrower Peters died of influenza in 1928. Doctor Dolittle in the Moon (1928) was planned to be the end of the Dolittle series, though public demand caused Lofting to resurrect his series with Doctor Dolittle's Return (1933). Dr. Dolittle's Birthday Book (1936) was followed by the final in the series, Doctor Dolittle and the Secret Lake (1948, posthumously) reviving the age old Noah and the Ark story. A number of his works have been adapted for the screen to great success. Lofting re-married in 1935, Josephine Fricker (d. 1966) from Toronto, Canada, with whom he would have a son, Christopher Clement (b.1936). Lofting wrote a number of other books including a magical tale set in the middle ages The Twilight of Magic (1930). Victory for the Slain (1942, adult non-fiction) addresses the horrors of war.

Hugh John Lofting died on 26 September 1947 at his home in Topanga, California. He lies buried at the Evergreen Cemetery in Killingsworth, Middlesex County, Connecticut, USA. The motto of the Irish Guards 'quis separabit' (Who shall separate us) adorns his simple gravemarker.

"Any child who is not given the opportunity to make the acquaintance of this rotund, kindly, and enthusiastic doctor/naturalist and all of his animal friends will miss out on something important."-- Jane Goodall.

The inscription on his gravestone, "quis separabit", is the motto of the Irish Guards.... 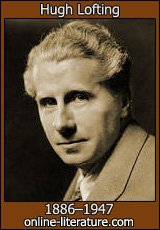 Here is where you find links to related content on this site or other sites, possibly including full books or essays about Hugh Lofting written by other authors featured on this site.