Joseph Sheridan Le Fanu (1814-73), "The Invisible Prince", Irish journalist and writer, father of the Victorian ghost story. While he is best known for his novel about the "venerable, bloodless, fiery-eyed" uncle, Uncle Silas (1864) it was his vampire novella Carmilla (1872) that would contribute to defining the horror genre and probably influenced Bram Stoker in his writing of Dracula.

In 1833 Le Fanu entered Trinity College, Dublin to study law, graduating in 1839. He was called to the bar but never practiced, instead embarking on a career in journalism. He joined the staff of the Dublin University magazine. In 1838 Le Fanu's first story The Ghost and the Bonesetter was published in the Dublin University Magazine, which he was to become proprietor and editor of in 1861. Many of his short stories were to form the basis for his future novels, some of them appearing anonymously.

In 1844 Le Fanu married Susanna Bennett with whom he had 4 children. Sir Walter Scott was to influence his first novel The C'ock and Anchor (1845). His second novel The Fortunes of Colonel Torlogh O'Brien was published in 1847. In 1851 Le Fanu and Susanna moved to their house on Merrion Square, Dublin, where he remained until his death. Ghost Stories and Tales of Mystery was published this year and The Mysterious Lodger in 1850.

In the year 1858 Le Fanu's wife Susanna died and he became a recluse, setting to work in his most productive and successful years as a writer. With two candles for light while nocturnally writing, he was to become a major figure of 19thC supernaturalism. His work turned Gothic's focus on external sources of horror to the inward psychological potential to strike fear in the hearts of men. Le Fanu wrote to George Bentley his publisher that through his writing he sought "the equilibrium between natural and the super-natural.."

The Purcell Papers (1880) were published posthumously. Le Fanu would have entered the annals of obscurity were it not for M.R. James who published a collection of Le Fanu's work in 1923. 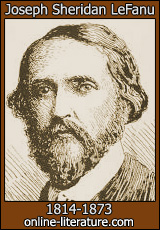 Here is where you find links to related content on this site or other sites, possibly including full books or essays about Joseph Sheridan Le Fanu written by other authors featured on this site.