Once there was an elephant,
Who tried to use the telephant

No! No! I mean an elephone
Who tried to use the telephone

(Dear me! I am not certain quite
That even now I've got it right.)

Howe'er it was, he got his trunk
Entangled in the telephunk;

The more he tried to get it free,
The louder buzzed the telephee

Laura Elizabeth Richards was born on 27 February 1850 in Boston, Massachusetts. Her father Samuel Gridley Howe was a teacher, physician and abolitionist who cofounded the Perkins Institute for the Blind, famous for it's method of "finger spell" and students Anne Sullivan and Helen Keller. Laura's namesake was Laura Bridgeman, a young girl who had been blinded and lost her hearing to scarlet fever, and who was the star pupil at the Institute. Laura's mother, social activist Julia Ward Howe wrote The Battle Hymn of the Republic. With such illustrious parents young Laura and her four siblings were early on introduced to the world of literature, culture, and distinguished public figures.

On 17 June 1871 Laura married her neighbor Henry Richards, a Boston architect, with whom she would have seven children. After honeymooning in Europe they settled in their Yellow House in Gardiner, Maine, so that Henry could take over the family papermill business. With the arrival of motherhood Richards fast set into her career of writing, her nursery rhymes and nonsense poems published in St. Nicholas. Her first book, Five Little Mice in a Mouse Trap (1880) was followed by Sketches and Scraps (1881), illustrated by her husband.

Another series consisted of Three Margarets (1897), Margaret Montfort (1898), Peggy (1899), Rita (1900), Fernley House (1901), and The Merryweathers (1904). Richards was not only known affectionately as the "Queen of Nonsense Verse", she also wrote highly acclaimed biographies. Florence Nightingale: Angel of the Crimea (1909) was followed by her compilation of her father's The Letters and Journals of Samuel Gridley Howe (1906-1909). She wrote of both her parents in Two Noble Lives: Samuel Gridley Howe and Julia Ward Howe (1911). Collaborating with her sister Maud Howe Elliott, their biography of their mother Julia Ward Howe: 1819-1910 (1915) won them the Pulitzer Prize in 1917. Richards also wrote many other biographies: Elizabeth Fry, the Angel of the Prisons (1916); and one of wife of American president John Adams Abigail Adams and Her Times (1917); she dedicated her Joan of Arc (1919) biography to Theodore Roosevelt, "also a soldier"; Laura Bridgman: The Story of an Opened Door was published in 1928; and finally Richard's Stepping Westward (1931) is her own personal memoirs of her travels in Europe, and stories and anecdotes of the famous literary friends in her life from Boston, Maine, and Concord, New Hampshire, including Nathaniel Hawthorne and Louisa May Alcott.

Honor Bright: A Story for Girls (1920) was followed by Honor Bright's New Adventure (1925). The second Captain January book, Star Bright was published in 1927. By this time Richards was also working on her own autobiography. Stepping Westward was published in 1931. She and her husband had been involved in several philanthropic endeavors over the years including founding Camp Merryweather for boys and instituting the Gardiner Library Association. Laura Elizabeth Richards died at home on 14 January 1943. What Shall the Children Read (1939) was her last book. 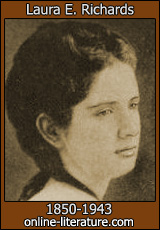 Here is where you find links to related content on this site or other sites, possibly including full books or essays about Laura E. Richards written by other authors featured on this site.