Laura Lee Hope is the pseudonym for numerous writers under the Stratemeyer Syndicate including Edward Stratemeyer (1862-1930) himself, his daughter Harriet Stratemeyer Adams (1892-1982), Howard Roger Garis (18731962), and his wife Lilian McNamara Garis (d.1954) who wrote the Bobbsey Twins juvenile series.

The Bobbsey Twins were first created in 1904 by Stratemeyer, who would come to perfect the sleuthing novel formula that was so popular at the time and remains in print today. His ghost writers churned out novels at an extraordinary rate for many of the Syndicate series including Nancy Drew, Tom Swift, and the Hardy Boys.

While there are some inconsistencies in character details, the older Bobbsey Twins are Bert and Nan, their younger twin siblings Freddie and Flossie. Their father Robert is a successful lumber merchant, their mother Mary a homemaker. They live in the fictitious city of Lakeport. Many other characters appear in numerous stories, like Danny Rugg, Aunt Sally Pry, the dog "Snap", and Dinah the housekeeper. The Twins best friends appear often; Charlie Mason is Bert's best friend, Nellie Parks Nan's, Teddy Blake Freddie's, and Susie Larker is Flossie's best friend.

Shadowy thieves, conflicts with bullies, sudden disappearances, pirates and buried treasure, the Twins experience a number of adventures whilst summering at the Lake or visiting relatives in the city or country. In fast paced plots they eagerly set forth to discover the clues that will lead them to reveal the mystery. While there is some mystery as to who was writing the novels and when, the Twins remain popular in the hearts of children all across North America, and were translated to numerous languages. 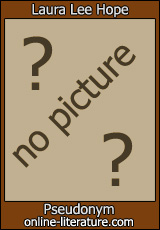 Here is where you find links to related content on this site or other sites, possibly including full books or essays about Laura Lee Hope written by other authors featured on this site.