Charles Lamb's biography should be read at length in his essays and his letters--from them we get to know not only the facts of his life but almost insensibly we get a knowledge of the man himself such as cannot be conveyed in any brief summary. He is as a friend, a loved friend, whom it seems almost sacrilegious to summarize in the compact sentences of a biographical dictionary....

Lamb was admired by many for his literary efforts but received little recognition during his lifetime. He went through periods of self-doubt and dismissal of all things literary when his work was not well-received publicly. However, he has left an extensive legacy of essays, stories, plays, poetry, and letters rife with his particular style of intimacy, wit, and touching humour deeply inspired by a remarkable insight into the people and the world around him. He wrote many works for children in prose and verse, as well as critical works on Elizabethan drama of such authors as Christopher Marlowe, Cyril Tourneur, William Shakespeare, and George Peele.

Charles Lamb was born on 10 February, 1774, at the Inner Temple of London England's Royal Courts of Justice where his father John Lamb worked as a clerk for Samuel Salt. Charles had an older brother John but he does not figure largely in his writings. However, he and his sister Mary (1764-1847) were very close all their lives. They both suffered from periods of mental illness; during one such episode of temporary insanity in 1796, Mary killed their mother, Elizabeth née Field. It was by the efforts of Charles and his becoming Mary's official guardian that she was released from the asylum. When she was well and at home with her brother Mary was a vibrant and creative woman who collaborated with her brother on many works including Tales from Shakespeare (1807). She also had some of her own poems published in Mrs Leicester's School (1809). In a letter to friend Dorothy Wordsworth, Lamb writes about his sister who is yet again in the hospital;

All my strength is gone, and I am like a [fool, ber]eft of her cooperation. I dare not think, lest I [should think] wrong; .... when I hope to have her well [again with me] it would be sinning against her feelings to go about to praise her: for I can conceal nothing that I do from her. She is older, and wiser, and better, than me, and all my wretched imperfections I cover to myself by resolutely thinking on her goodness. She would share life and death, heaven and hell, with me. She lives but for me.

In 1782 Lamb entered the boarding school of Christ's Hospital in West Sussex where he met Samuel Taylor Coleridge, who would become a life-long friend. When he graduated in 1789, he had already been writing poetry for some time--in 1796 the first of these were published in Coleridge's collection Poems On Various Subjects. In 1792 Lamb obtained a position with the British East India Company as an accountant. Lamb also continued to write epigrams, plays, poetry, and essays, many printed in such publications as the The Albion, The Morning Chronicle, and The Morning Post.

Now earning a steady income, Charles was living at home again, helping Mary look after their parents when a pall of misfortune spread over the household; John's employer died so he lost his income; Charles was hospitalised for a period of insanity; and then his mother died. At the age of twenty-one Charles became the head of the family, caring for his aging father and his sister Sarah Lamb, "Aunt Hetty". After they both died in 1799, Charles and Mary moved a number of times before settling again at living quarters at the Temple. Lamb writes affectionately of his father in his essay "The Old Benchers of the Inner Temple". Charles delighted in living in London and often extolled the virtues of his beloved city and her people, the crowds, cafes, shops, the Strand and Fleet Street. While he enjoyed being solitary and often went on walks at night, Lamb had numerous friends and acquaintances, as his letters attest. He and his sister had frequent visitors, their salon evenings consisting of playing cards, eating, drinking, smoking, and discussing various topics from all things literary to the everyday. Guests included fellow poets Coleridge, Percy Bysshe Shelley, and William Wordsworth and his sister Dorothy who the Lambs had met while on summer holiday in the Lake District and who for a time lived just around the corner from the Lambs. Unlike his companions, Charles was not one to revel in the rural surroundings of England; he made a few trips to the country and once to Paris, but he found his inspiration and solace in the bustle and hectic life of the city.

The same year that Lamb's story "A Tale of Rosamund Gray and Poor Blind Margaret" (1798) appeared, his collaboration with Charles Lloyd, Blank Verse was also published. Lamb tried his hand unsuccessfully at theatre, writing a number of dramatic works including John Wodvil (1802) and Mr. H (a farce in verse, 1806). They were followed by Tales from Shakespeare (1807), The Adventures of Ulysses (1808), Specimens of English Dramatic Poets Who Lived About the Time of Shakespeare (1808), On the Tragedies of Shakespeare (1811), and Witches and Other Night Fears (1821).

In 1817 the Lambs moved to Russell Street, Covent Garden, where Charles would embark on his most successful period of writing, penning works under his pseudonym "Elia" for London Magazine. Also around this time the Lambs adopted an eleven year old orphan named Emma Isola (1808-1891) who brought much joy and youth to their home. Charles would go for long walks with her and Mary especially doted on her. In 1823 Charles moved to the first house he ever lived in, a white cottage in Islington. Two years later he retired with a pension after thirty-three years with the East India Company; he now had time to spend in his garden, ".... with vines (I assure you), pears, strawberries, parsnips, leeks, carrots, cabbages, to delight the heart of old Alcinous." (letter to Bernard Barton, 1823). After another episode of illness, Mary went to live at Walden House in Edmonton where Charles would soon join her. In a letter to Wordsworth dated May 1833 he tells him of how it is best that he just live with her there where she can get the care she needs from the Waldens and not have all the upset of moving back and forth from home to hospital. Her illness was certainly wearying on him too; he often took to drinking when going through the emotional upheavals of loneliness and worrying about her. But Lamb was much cheered when Emma married his friend and publisher Edward Moxon (1801-1858) in 1833.

In July of 1834, when his good friend Samuel Taylor Coleridge died, Lamb was devastated, "incapable" of writing a tribute to him in The Athenaeum at the request of publisher Charles Wentworth Dilke. He passed days in morbid bemusement that his dear friend was gone, seemingly at a loss for words at times. While out walking one day, Lamb fell and injured his face. He contracted erysipelas, an infection, and died on 27 December 1834. He now rests at the churchyard of All Saints Church in Edmonton, North London, England, his beloved sister Mary buried beside him.

They talk of time, and of time's galling yoke,
That like a millstone on man's mind doth press,
Which only works and business can redress:
Of divine Leisure such foul lies are spoke,
Wounding her fair gifts with calumnious stroke.
But might I, fed with silent meditation,
Assoiled live from that fiend Occupation--
Improbus Labor, which my spirits hath broke--
I'd drink of time's rich cup, and never surfeit:
Fling in more days than went to make the gem
That crown'd white top of Methusalem:
Yea on my weak neck take, and never forfeit,
Like Atlas bearing up the dainty sky,
The heaven-sweet burthen of eternity.

Deus nobis haec otia fecit--"God has provided this leisure for us", Virgil (Eclogue I, l.6)

What did the Romantics eat?

Hi there, I'm planning a supper on the street where Charles Lamb lived. So I'd like to be playful with the menu and refer to, if not replicate, the kind of dishes Lamb and his crowd would have had for dinner. I'm also really interested in whether their menu would have reflected their aesthetic choices in comparison to their peers -- were Lamb and Coleridge more drawn to robust, common fare than fastidious Beau Brummell or vegetarian Shelley, for example? If you can offer me any help on what my dinner might contain, or at least gesture to, I'd be really grateful. Thanks, Cathy...

hello all.. cn u plz give me a short explaination of "Dream Children" -- By Charles Lamb~! Got an examination tomorrow.. really worried..! bye... 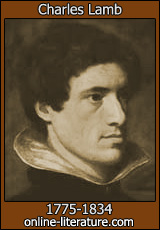 Here is where you find links to related content on this site or other sites, possibly including full books or essays about Charles Lamb written by other authors featured on this site.